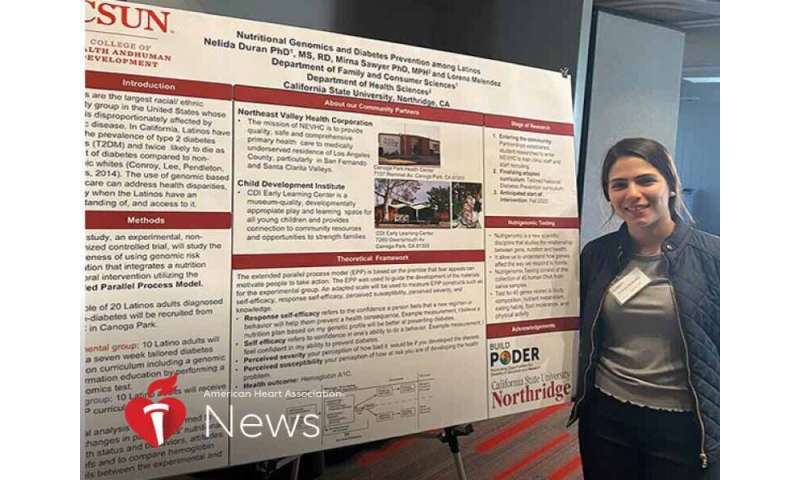 Growing up in Colima, Mexico, Lorena Melendez-Chavez remembers there was always nourishing food on the table—beans, rice, legumes, tortillas, cheese, vegetables and fruits—despite her family not having financial resources to spare. Her mother, who grew up on a small farm, also insisted her four children exercise because it was just as important to burn off energy as to eat well.

“I don’t know where she got all of that information, but I was very aware of the connections between healthy food and well-being from an early age,” Melendez-Chavez said. “And later, when I came to the United States for high school and started trying other foods, I saw the difference in the way I felt. … I was very lucky because I had one teacher that I could talk to about food and healthy eating, and we shared recipes and we became close.”

That’s when she started to investigate nutrition as a career.

Now, the 22-year-old is a senior at California State University, Northridge studying nutrition and dietetics—and she already has a head start on work experience and research.

While sharing healthy eating habits with Latinos in senior centers near Los Angeles, Melendez-Chavez discovered she wanted to focus on community nutrition. As part of her work there, she led a focus group to evaluate if the program was working, sparking her interest in research and gaining acceptance into a program funded by the National Institutes of Health to study Latinos with prediabetes.

“This is where I learned that research is another way to make an impact, especially because we work under a social justice lens,” she said. Latinos in the United States are impacted disproportionately by diabetes and cardiovascular disease, and “I started getting very interested in working with that population, and it was very easy for me to create a connection with that community.”

Then Melendez-Chavez met Nelida Duran, an assistant professor in the university’s department of family and consumer sciences, who became her advisor and mentor. As Duran’s research assistant, Melendez-Chavez wears many hats as they study the role of nutrition in eliminating health disparities.

One of their projects is introducing the new field of nutrigenomics—which studies the relationship between the human genome, nutrition and health—to the greater Los Angeles Latino community.

“Basically, it’s the relationship between how food affects your health but also how it’s related to your genes,” Melendez-Chavez said. “So, like, you can see that a patient needs more physical activity because of their genes, so we intervene and then study how likely are they to change their behavior with this new information.”

The nutrigenomics project is one of the studies Melendez-Chavez is conducting via a scholarship she earned from the American Heart Association’s EmPowered to Serve Scholars Program, which gives money to college freshmen, sophomores and juniors for their work in helping to close health disparity gaps.

Duran finds her collaborations with Melendez-Chavez exciting because of their shared interest in public health and her bi-national perspective. Melendez-Chavez is as committed to serving U.S. Latinos as she is those in her native country. One of her other projects studies remittances and food insecurity in Mexico.