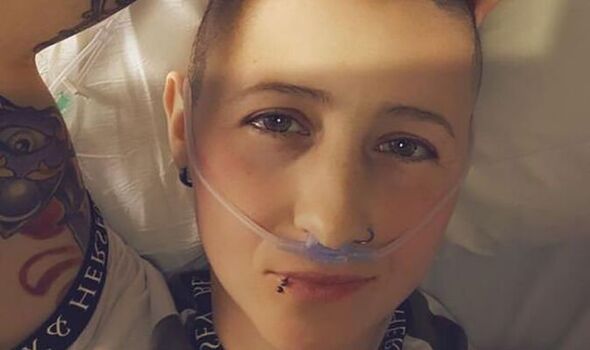 Rebecca Humphreys, who had been decorating her bedroom, jumped from a windowsill, not realising that she had left a porcelain ornament on the floor. The resulting injury looked like a “paper cut” with only a small amount of blood.

However, two weeks later Rebecca’s foot ballooned to the size of a rugby ball, with doctors stating it was badly infected and that it would need to be amputated “there and then”, reports Yorkshire Live.

After a second opinion, surgery was ruled out and the foot was saved – but this was only the start of her problems.

It was later discovered that a shard of the ornament had penetrated her foot and had caused nerve damage that led to pain that would not go away.

Rebecca told doctors that she was in agony but was told that her foot was fine and the pain was not real.

For the next 17 years, sport-loving Rebecca was plagued by agonising pain and was eventually diagnosed with a chronic regional pain condition.

Painkillers were prescribed but nothing would shift the pain and misery. After hundreds of medical appointments, and many treatments and therapies, her suffering continued.

She had to give up her job and her mobility deteriorated. She could not touch her own foot because of the pain.

At one stage Rebecca became suicidal. Amputation was raised as a possibility but surgeons were reluctant to carry it out because there was no guarantee it would stop the pain.

But she got her wish on April 26 when her leg was removed at Leeds General Infirmary.

Rebecca, from Wakefield, West Yorkshire, who has just turned 33, says the operation has given her hope for a second chance in life.

After waking from the anaesthetic, she immediately felt happier.

“I didn’t once look or wonder about the amputation,” she says. “I just felt like the weight of my shoulders had lifted.”

She says that the “sadness of my soul” has lifted, with the help from her beloved dogs and her mum.

“It made me feel like I have hope and feel so grateful for a second chance in life. I’m so thankful for all the support even if I’m not fully recovered I’ll never look back in any doubt.”

Rebecca says she feels “stronger than ever” having endured “18 years of pain from my silly accident.”

“I hope I can show to myself and others that anything is possible.”

“My mum has been at my side throughout it all and grew to understand what others couldn’t and fought my battle with me.

“It’s been tough and I still have many challenges ahead but I’m not giving up.

“I’m unable to really say what I’d like for my future as to me it will come to me as it’s planned.

“I want to be able to take a step without pain all the time and to walk and climb mountains. And walk my dogs alone without help.”

Mum Theresa, who lives in Tingley, near Wakefield, said her daughter was still in some pain following surgery but it wasn’t as severe as it had been.

“It is more manageable. She was right all along. She was telling people all along since she was 15.

“Everyone kept saying it was a healthy foot. We found a consultant who believed in her.

“For years they could not decide what it was that she had. She has been on painkillers since she was 15. She is now aiming to be free of painkillers. She has lost so many years but is remaining positive.”

Theresa said she wanted to thank Paul Harwood, a consultant at Leeds General Infirmary, for helping her daughter and “believing in her”.

She claimed that medics could have done more back when her daughter was 15. “They didn’t do a blood test or an MRI scan. The foot looked ok on the outside.”

Theresa said: “It was a trauma injury. Her auto immune system should have switched off but it never did. They just thought it (the pain) was in her head.”