Heartwarming moment woman, 36, who has NEVER spoken because of a rare brain disease tells her mother ‘I love you’ using device which converts eye movements to words

A severely disabled woman who has never been able to talk has told her mother ‘I love you’ for the first time thanks to eye-tracking technology.

Pauline Rett, 36, from Kidderminster, was robbed of her movement and speech at the age of two by Rett syndrome.

The cruel and life-limiting disease strikes patients when they are toddlers, regressing the development of their brains.

Ms Rett has spent her entire life confined to a wheelchair and unable to communicate, other than through limited facial expressions.

But now she can talk to her family after they saved up £9,000 for a computer which converts eye movements into speech – just like the one used by the late Professor Stephen Hawking. 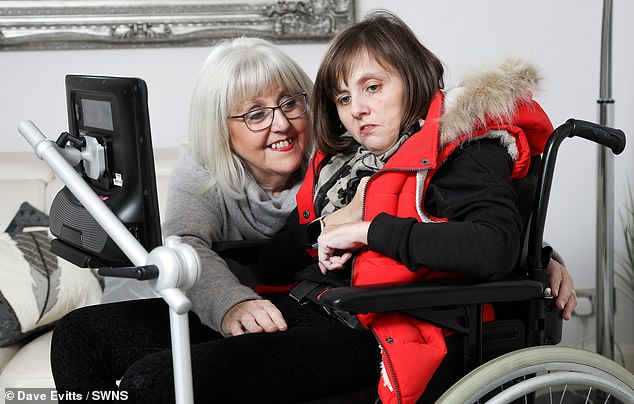 Judith Worrall has heard daughter Pauline, 36, say ‘I love you’ for the first time thanks to eye-tracking technology 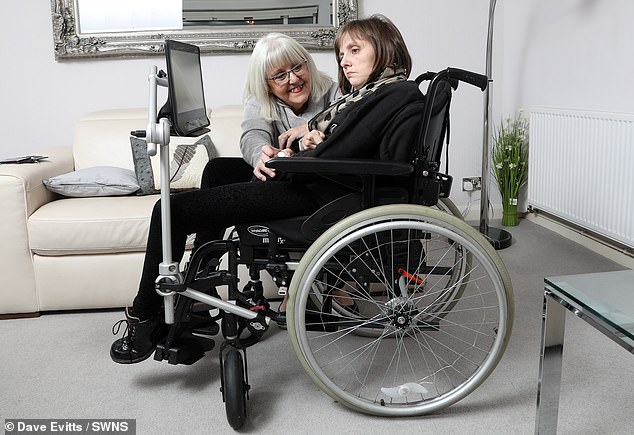 The Tobii Dynavox is a form of Augmentative and Alternative Communication [AAC], which allows Ms Rett to control a cursor on a computer screen.

Infrared light is reflected onto Ms Rett’s eyes. It traces whatever symbol or phrase she is looking at on the screen in front of her.

The tech then converts the data into speech, which is blared out through speakers by a computer generated voice.

It has allowed Ms Rett to talk – and even share jokes – with her family for the first time in more than three decades.

Her thrilled mother Judith, 64, has now been filmed speaking to her daughter for the first time.

Mrs Worrall, who cares for her daughter full-time, said: ‘It might sound a small thing but I’ve never heard Pauline speak before. 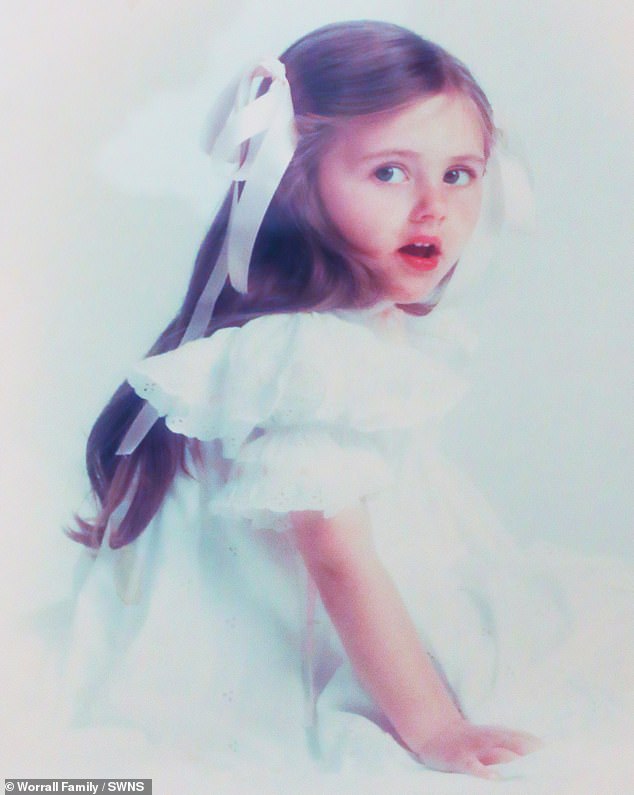 One child in 12,000 is born with Rett syndrome, which affects almost exclusively females, causing them to regress neurologically and physically (Ms Rett as a child) 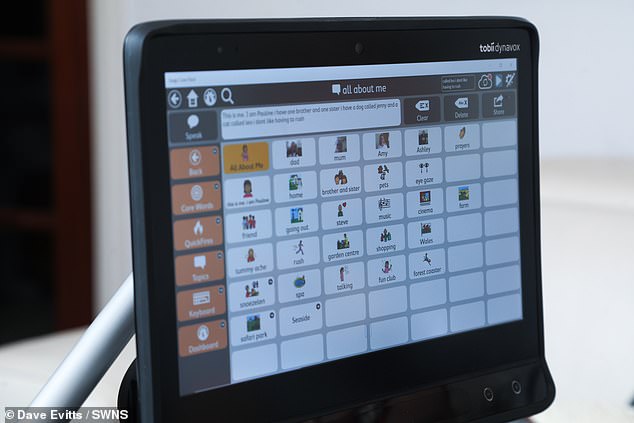 Using eye-tracking technology, Ms Rett is able to spell out words that are spoken by an automated computer voice

‘Her first words to me were “I love you” which was wonderful. We can now have jokes and chat which means so much to both of us.’

Rett syndrome, which has four stages, strikes up to one in 12,000 girls, according to estimates. It is rarely seen in males.

Recalling the moment Ms Rett started regressing mentally and physically, her mother added: ‘You think you have a perfectly developed child who suddenly is going backwards so it is a devastating diagnosis.

‘She was unable to speak or use her hands. We said we felt we like we were falling down a cliff and we didn’t know quite when we would climb back up again.

‘I just knew she was aware of what was going on and what we were saying to her. 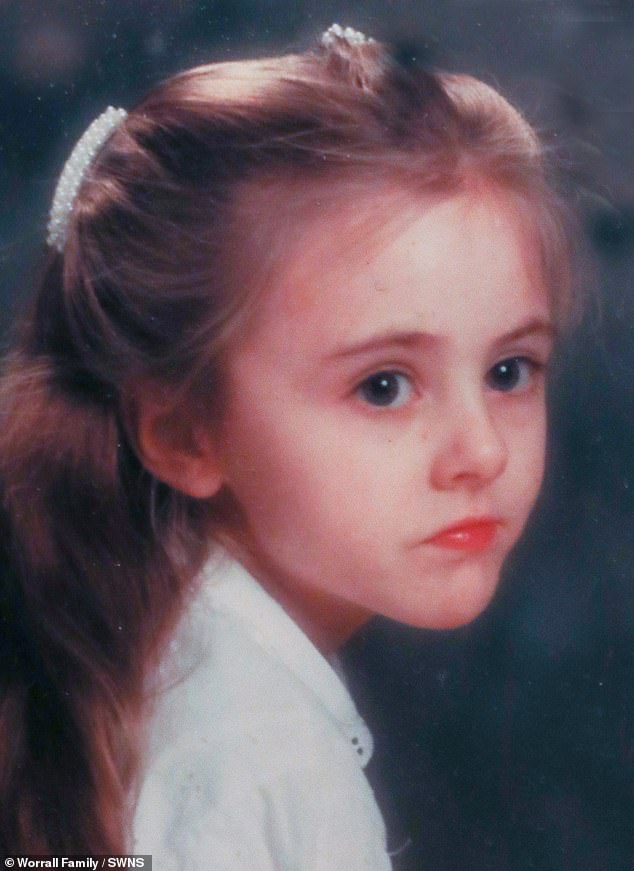 Recalling the moment Ms Rett started regressing mentally and physically, her mother said: ‘You think you have a perfectly developed child who suddenly is going backwards’

‘It’s partly instinct and that she laughed in all the right places. I knew she was listening.’

Ms Rett’s voice computer fits onto the front of her wheelchair so she can use it outside of the home and enable her to have greater independence.

Ms Worrall added: ‘The best thing about the computer is when she tells us she loves us and when she calls me mum.

‘It’s always been a strong relationship. I have always adored her. But I feel I have more fun with her now.

‘Sometimes she tells me just how hard having the condition is which is very sad but it’s good she can express that now.

‘She has told me she’s frightened and she’s told me she is frustrated – which I would be if I couldn’t say what I wanted to say.’

WHAT IS RETT SYNDROME? THE NEUROLOGICAL DISORDER THAT LEAVES KIDS UNABLE TO SPEAK, EAT, WALK, TALK AND BREATHE

One child in 12,000 is born with Rett Syndrome, yet few people have heard of it.

The progression of the disease can be roughly divided into four stages.

During the first stage, from about the age of six to 18 months, a baby slows in development, loses interest in play, stops making eye contact, starts walking awkwardly and makes repetitive hand movements.

The second stage, known as ‘rapid destruction’, begins between the ages of one and four.

The child finds it increasingly difficult to communicate and learn and there is often a deterioration in other brain functions.

The third stage, the ‘plateau’, begins between age three and ten.

Limbs become floppy, epilepsy may develop and there may be weight loss and teeth-grinding.

However, many parents say children are less distressed and show more interest in their surroundings.

The final stage can last for decades. Usually severe bending of the spine – scoliosis – develops, as well as losing the ability to walk.

Almost all cases are caused by a mutation in the MECP2 gene which prevents nerve cells in the brain from working properly.

Currently there is no cure and only the symptoms are treated. Sufferers can live to their 40s but most die before 25.