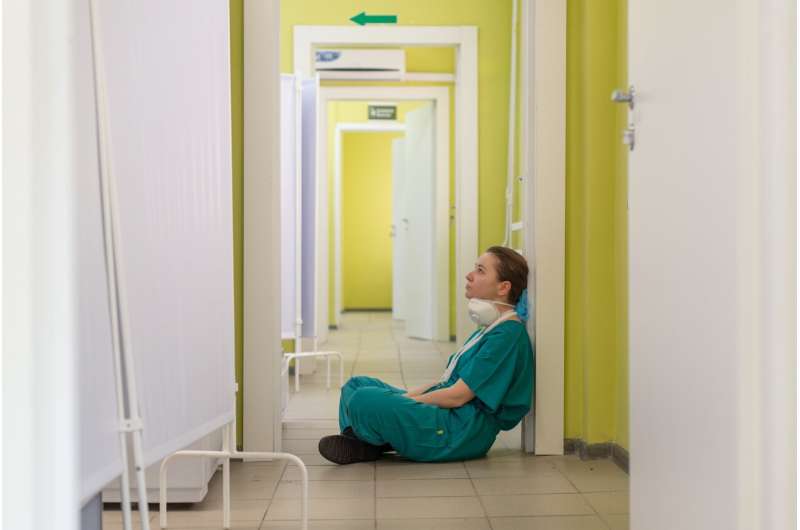 During the most acute periods of the COVID-19 pandemic, nurses faced record levels of stress and burnout. As pandemic stress on hospitals and nursing homes now recedes, will nurse burnout recede as well? Many policymakers assume so. However, Penn School of Nursing’s Rachel French, Karen Lasater, and colleagues find that high rates of burnout and intent to leave existed before the first COVID-19 patients ever entered U.S. hospitals and nursing homes.

Our analysis of survey data collected December 2019 through February 2020 from 33,462 registered nurses (RNs) in New York and Illinois revealed that more than 40% of RNs reported high burnout. As we reported recently in the Journal of Nursing Regulation, one in four were also dissatisfied with their job, and one in five planned to leave their employer within one year (one in three among nursing home RNs). In addition, over half (56%) of RNs reported not having enough staff to get their work done, 68% rated care quality at their workplace as less-than-excellent, and 31% of hospital RNs gave their hospital an unfavorable patient safety rating.

Burnout isn’t just a personal issue for RNs—it is a persistent threat to public health. Evidence shows that in hospitals with higher rates of RN burnout, patient safety is threatened and patients have higher odds of dying.

If RN burnout was already too high before the pandemic, what can be done to decrease it on the heels of a multi-year pandemic response? Setting minimum nurse staffing standards is an evidence-based policy intervention that could be adopted at either the state or federal level or as a condition of participation in Medicare. Chronic understaffing and unsafe nurse workloads are major contributors to RN burnout. Decades of research have shown that each additional patient in a nurse’s workload is associated with poor patient outcomes, including mortality and hospital readmissions, as well as poor nurse outcomes including burnout, job dissatisfaction, and intent to leave. To date, California is the only state to have implemented minimum hospital nurse staffing standards. The unfunded policy mandate was implemented in 2004 with good effect—patients in California hospitals receive 2–3 more hours of nursing care per day on average compared with patients in other states, with the greatest staffing improvements in safety-net hospitals.

A common concern about implementing safe nurse staffing standards is whether there are enough nurses to meet new staffing standards. The U.S. has more nurses per capita and more new entrants to nursing now than ever before. The problem is not that we have too few nurses, but rather that we have too few nurses willing to work under current working conditions.

Other policies can help alleviate nursing shortages that may exist in some geographical regions. For example, state adoption of the Nurse Licensure Compact (NLC) enables RNs licensed in an NLC state to practice in other NLC states via a multistate license. During the first surge of COVID-19, governors in some states (e.g., New York) used their temporary emergency powers to waive licensure requirements for RNs coming from other states to help with the COVID surge. Such emergency powers would not have been necessary had those states been part of the NLC. Twelve states still have not enacted the NLC, including New York and California. Further adoption of the NLC could facilitate greater mobility of the much-needed nursing workforce across the U.S. to meet the demand for nursing care. In addition to relieving acute nurse staffing shortages, mobility from the NLC could facilitate meeting safe nurse staffing standards, which is associated with less nurse burnout. Such a policy would also help reduce long licensing wait times, which have caused significant delays in hospitals trying to onboard new nurses.