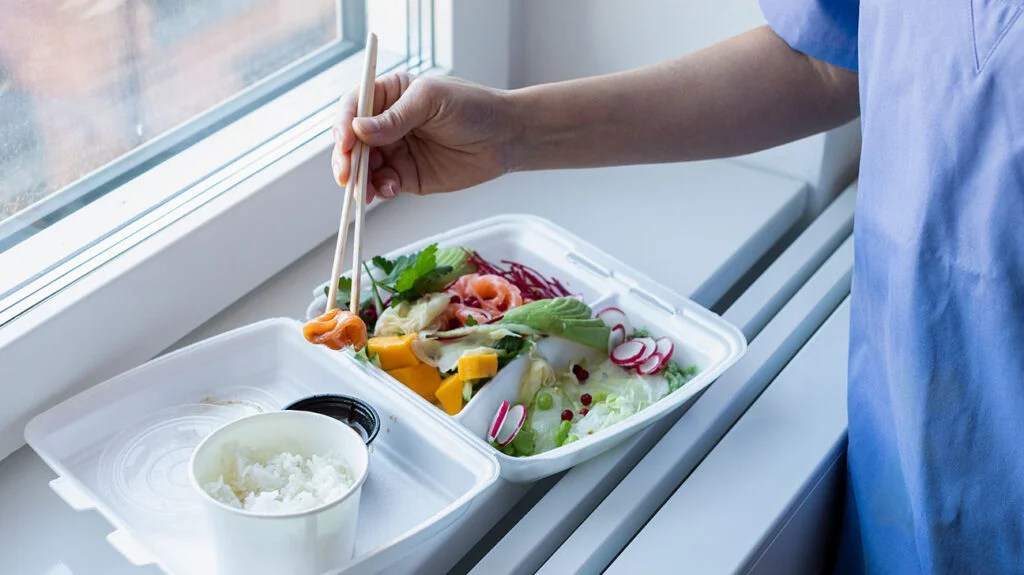 Shift workers often experience misalignment between their 24-hour body clock — known as the circadian clock — and daily environmental and behavioral cycles due to irregular work hours.

Studies show that circadian misalignment has a negative impact on mood and sleep. Other research shows that shift workers have a 25–40% higher risk of depression and anxiety than non-shift workers.

Previous research from 2019 shows that shift work is also associated with a higher risk of metabolic conditions, such as type 2 diabetes. But evidence is emerging that daytime eating — even with irregular sleeping hours — could help maintain circadian alignment and prevent glucose intolerance during night work.

More research into evidence-based circadian interventions is crucial for improving the mental health of at-risk populations.

Recently, researchers conducted a randomized clinical trial (RCT) to see how daytime eating affects mood among those who worked in a simulated shift-work environment.

They found that while participants who ate during the day experienced no shifts in mood, those who ate at night experienced increased depression-like and anxiety-like moods.

“This study shows that changing meal timing can provide clear and measurable effects on mood under shift work conditions,” Stuart Peirson, Ph.D., professor of circadian neuroscience at the University of Oxford, not involved in the study, told MNT.

“As the authors note, this study used simulated shift work schedules under laboratory conditions. It remains to be tested whether night shift workers will benefit,” he added.

The researchers published their findings in Proceedings of the National Academy of Sciences (PNAS).

For the study, the researchers recruited 19 participants including 12 men and 7 women with an average age of 26.5 years old.

To prepare for the study, the participants maintained a fixed bedtime of 8 hours for 2 weeks. They then underwent a 14-day lab stay.

After several days of acclimatizing to the lab and providing baseline measurements, the participants underwent a forced desynchrony (FD) protocol in dim light for 4 28-hour “days.”

The protocol allowed participants to gradually shift to a “nighttime work schedule.” By the fourth day, they were misaligned from the first day by 12 hours.

During the FD phase of the study, participants were randomly assigned to receive meals either in the daytime alone or during the daytime and nighttime together, which is typical for night workers.

Other conditions remained the same among the participants, including caloric and macronutrient intake, physical activity, sleep duration, lighting conditions, and night work.

The researchers assessed participants’ depression-like and anxiety-like mood states every hour during the FD days.

After analyzing the results, the researchers found that those who ate during the night and day had a 26.2% increase in depression-like mood, and a 16.1% increase in anxiety-like mood, compared to the beginning of the study.

By comparison, those in the daytime eating group experienced no change in levels of depression-like or anxiety-like mood.

By assessing the participants’ glucose and body temperature rhythms, the researchers found that degree of circadian misalignment was robustly linked to more depression-like and anxiety-like moods.

They further noted that daytime eating only despite mistimed sleep was linked to maintenance of internal circadian alignment.

When asked how meal timing might interact with circadian rhythms, Sarah Chellappa, Ph.D., from the Department of Nuclear Medicine at the University of Cologne, Germany, and co-corresponding author of the study told MNT:

“This disruption in the circadian alignment between different clocks throughout our body (called internal circadian misalignment) may account for the increased physical and mental health risks among night shift workers who often eat during the night.”

Gregory Nawalanic, Ph.D., a clinical psychologist at the University of Kansas Health System, not involved in the study, told MNT that clinicians are aware of the potential for depression and anxiety to produce circadian dysregulation as patients’ sleep patterns are often disrupted.

“This dysregulation can produce disconnection from the outside world as an individual perhaps sleeps through commitments only to wake and experience increased depression/anxiety or self-loathing as a result. “This fuels a vicious cycle that exacerbates their experience of depression or anxiety in terms of feeling hopeless or helpless about their situation,” Dr. Nawalanic said.

“This study reveals an interesting new angle where we examine this impact in reverse — exploring how circadian misalignment impacts mental wellness. That said, it stands to reason that the influence could very well be bidirectional.”

“Animal work shows that — even among healthy animals — experimentally induced disruptions of circadian rhythms can negatively affect the activity of brain regions essential for mood control, and result in more depression-like and anxiety-like behaviors, whereas the resynchronization of circadian rhythms can prevent such effects. Thus, circadian alignment may be essential to maintain optimal activity in brain regions regulating mood.”

The researchers concluded that their findings offer a proof-of-concept demonstration that meal timing may prevent mood vulnerability in shift work schedules.

When asked about the study’s limitations, Dr. Nawalanic noted:

“As the circadian misalignment was created in a laboratory setting, the largest limitation of this study comes in the form of real-world application. They [also] do not factor in the interpersonal disconnection and relational frustration that shift workers may experience as a result of their schedule. This is an important variable that may largely influence depressive and anxious feelings and concerns.”

“It would be good to also measure [or] indicate the biomarkers for psychological distress (e.g., serotonin [and] cortisol levels) on top of measuring the self-administered questionnaires, so the results will be more convincing.”

When asked how these findings could influence mental health management, Dr. Chellapa noted that until further studies are conducted, “it might be helpful if night workers reconsidered the amount of food (particularly carbohydrates) they eat in the nighttime.”

Dr. Nawalanic added that these findings could point toward a tool that therapists could employ with shift workers struggling with depression and anxiety.

“It could also provide a potential behavioral therapeutic intervention in the form of dietary recommendations that might help to produce meaningful in-roads in the management of these conditions in shift workers,” he said.

“It would be important to describe the nascent state of these discoveries, but sometimes providing a meaningful straw at which to reach can be pivotal in producing meaningful positive change in someone who has begun to feel helpless and hopeless about their condition.”

– Gregory Nawalanic, Ph.D., a clinical psychologist at the University of Kansas Health System