Why doctors may start prescribing nicotine to help beat disease: New research shows the addictive element of cigarettes may be a potential treatment for Parkinson’s, dementia and even Covid-19

Matt Eagles smoked his first cigarettes — which he bought quite easily from the local newsagent — aged 12.

‘I was the sort of kid who just liked being naughty, but it soon became a regular habit,’ says the 51-year-old from Cuddington, Cheshire.

It’s a story familiar to millions, but while smoking is universally regarded as bad for health, in Matt’s case he believes the nicotine from the cigarettes may have had an unexpected benefit. 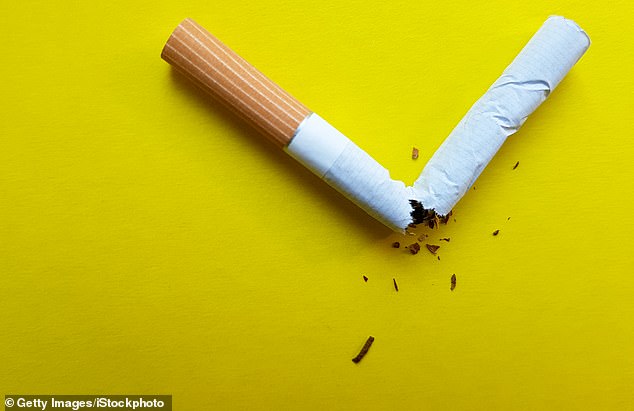 Nicotine – the main addictive element of cigarettes – is emerging in studies as a promising treatment for Parkinson’s, ADHD, dementia, schizophrenia and even coronavirus. (Stock image)

‘I lost my sense of balance and at first they thought it was arthritis or a brain tumour,’ says Matt.

‘My left hand was developing a life of its own and kept shaking and moving, which was a problem because I’m left-handed. I felt as though my wrist was going to drop off, and I’d walk on tiptoes.

‘I love sport and was a goalkeeper, but it got to a stage where I was diving for the ball after it had gone into the net. It was very frustrating but I just moved on to do other things instead. In the end they worked out it was Parkinson’s.’

The disease, which causes uncontrollable tremor, stiffness and difficulty walking, affects about 145,000 people in Britain. As well as the physical symptoms, most patients develop memory loss as the disease progresses.

The condition occurs when cells that produce dopamine, a chemical messenger in the brain which helps control body movements, progressively die off.

There have been no new effective treatments for Parkinson’s for more than 20 years and current therapy merely reduces symptoms, rather than tackling the causes.

Now nicotine — the main addictive element of cigarettes — is emerging in studies as a promising treatment. And it may also be useful for some other brain disorders, such as attention deficit hyperactivity disorder (ADHD), dementia and schizophrenia — and even Covid.

In the case of Parkinson’s, nicotine, a chemical found in many plants, not just tobacco, has been shown to activate the cells that produce dopamine.

Research suggests that people whose diets contain a lot of tomatoes, peppers and aubergines — all of which contain nicotine — have a 30 per cent lower chance of developing Parkinson’s.

Separately, Dr Mohammed Shoaib, head of the psychopharmacology research group at Newcastle University, is leading a project to develop a nicotine-based treatment he hopes will work on the movement and memory degeneration that is caused by Parkinson’s disease.

Studies in the U.S. have also suggested that the receptors nicotine binds to increase the amount of calcium entering cells in the bones, which appears to reduce the bone loss associated with Parkinson’s.

Bad, Good, Best: How to get the most out of food choices 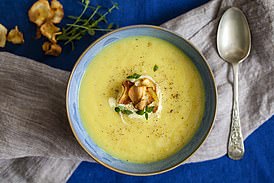 Creamy parsnip soup may well count as one of your five-a-day, but a typical recipe contains butter and whole milk and provides around 300 calories per bowl.

It also contains 6g or 30 per cent of your daily recommended allowance of saturated fat. 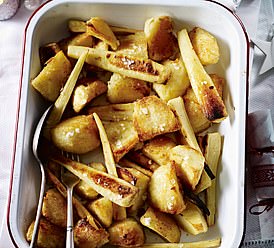 Roasted parsnips supplies nearly half of your RDI of vitamin B12

A 100g portion of roasted parsnips has 133 calories and 0.7g of saturated fat.

It supplies nearly half of your RDI of vitamin B12, which staves off fatigue.

However, over-roasting can increase the chemical acrylamide that is linked to cancer. 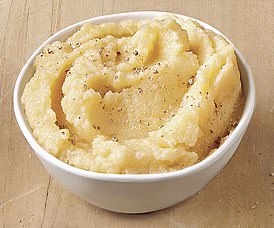 Mashed parsnips provides 20 per cent of your RDI of potassium

There are just 89 calories in 3 tbsp (135g) of boiled mashed parsnips — which rises to 124 calories with 1 tsp of heart-healthy olive oil.

It also provides 20 per cent of your RDI of potassium, needed for healthy blood pressure. Mash with carrots to boost your vitamin A intake.

‘Before the operation, I was on 25 different tablets a day,’ he says. ‘I found eating anything slowed the absorption of the medication but if I had a cigarette after a meal I would feel better sooner.’

While he had to stop smoking ahead of the complex six-hour procedure and hasn’t smoked since, Matt is convinced nicotine had helped him: ‘Since I’ve had the implant, things have been much better, so I don’t know what difference cigarettes might have made.’

No one is suggesting people take up smoking, and there is no doubt that the use of nicotine as a drug is controversial, with different views on whether it’s addictive as a treatment, for instance.

Dr Shoaib says a number of promising nicotine compounds have been investigated as treatments for Alzheimer’s and schizophrenia, but some have had to be abandoned due to side-effects.

A trial of one drug, encenicline, was stopped because the treatment caused serious stomach problems in some people.

‘Patients have had their hopes raised so many times, but it wouldn’t surprise me if there’s a nicotine compound owned by some pharmaceutical company that’s the golden bullet, but we can’t get access to it,’ he says.

But if support for nicotine-based research has been lukewarm over fears of side-effects and its addictive nature, one advance that may encourage more studies is the discovery that it seems to protect people from Covid-19 — with smokers 80 per cent less likely to develop the infection (although they are more likely to suffer badly if they do catch it).

Research by Konstantinos Farsalinos, a professor of public health at the University of Patras, Greece, found that although China has high smoking rates, relatively few smokers ended up in hospital.

‘We thought it could be the effects of nicotine,’ he told Good Health. ‘It promotes the function of cell receptors crucial in controlling the immune system.

‘We know severe Covid-19 is an immune over-reaction, which is what causes the inflammatory damage. We’re also looking at the [nicotine-mimicking] anti-smoking treatment Champix as a potential Covid treatment.’

A study is under way in Paris involving 1,500 healthcare workers, where half will wear nicotine patches, the remainder dummy patches, to see if there is a difference in the way people exposed to nicotine respond to Covid.

Meanwhile, James Boyd, a professor of neurological sciences at the University of Vermont in the U.S., whose work has suggested nicotine may have a role in treating attention deficit hyperactivity disorder (ADHD) and Tourette’s (which causes uncontrollable repetitive movements or sounds, called tics), led a review published last year in the journal Nicotine & Tobacco Research.

He believes that apart from its influence on dopamine, nicotine has a separate mechanism which may protect brain cells.

But it may be Parkinson’s patients who are nearest to getting an effective treatment, with human trials of a nicotine compound set to start next year.

Professor Farsalinos says even though nicotine in cigarettes is considered addictive: ‘It’s been tested in non-smoking Alzheimer’s and Parkinson’s

patients and there have been no problems with dependence.’

Dr Shoaib explains they are looking at five compounds in nicotine. ‘Ideally, we wanted to find one that’s safely out there in clinical use already for a different indication and see if it works,’ he says.

One of the five is verenicline, sold under the brand name Champix.

‘We are testing it on rats, and if it’s promising there’s an opportunity to roll it out for Parkinson’s patients quite quickly, because it’s already on the market with no reported safety issues in users who have tried it for smoking cessation,’ says Dr Shoaib.

‘We have a neurologist and a psychiatrist who have access to 300 patients, and we could get them involved in a large trial as early as next year.’

Charity Parkinson’s UK, which is funding the research, is enthusiastic. ‘Because it’s addictive, nicotine is thought of as bad for you, but excitingly, research has found it can help protect brain cells from the damage seen in Parkinson’s,’ says Dr Beckie Port, research manager at the charity.

‘If we can unlock the potential, nicotine could be life-changing for people living with the condition.’

But misgivings remain. ‘We should be able to study and investigate where nicotine might have an impact,’ says Professor Jamie Brown, director of the tobacco and alcohol research group at University College London.

‘But evidence of its benefits remains a mixed bag, and it’s important people don’t think they should smoke to get the nicotine [benefits], because we know smoking is lethal.’

Five of the best biscuits

Over the three months of lockdown earlier this year, Brits spent an extra £19 million on biscuits. While a sweet biscuit is never going to be a health food, dietitian Evelyn Toner (foodship.co.uk) recommends some of the better options…

This is one of the lowest amounts of sugar of any sweet biscuit, with around three-quarters of a teaspoon per biscuit, compared with more than two teaspoons in a Penguin, say.

For a sweet treat, these are also a good source of fibre, with 1g in each one from the oats. Although you’d clearly get more nutrients and fibre from fruit and veg, if you must have a biscuit with your cup of tea, then this is a good option. 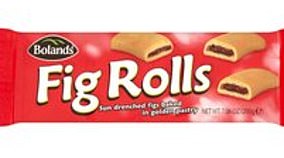 FIG ROLLS are relatively low in fat and figs actually feature among the first ingredients.

This means some of the sugar is natural, which might give you some of the benefits of the fruit. You may also get some minerals: figs contain iron, potassium (for healthy blood pressure) and calcium, plus vitamins A and K, for the immune system. 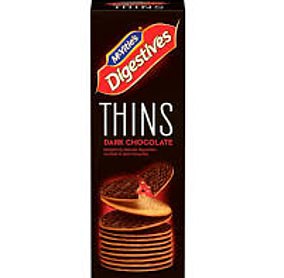 These are really light — only 31 calories per biscuit, which is less than half of what you get in a normal chocolate digestive. There aren’t many other beneficial nutrients here, but this lower-calorie version is good for anyone who wants the taste of a biscuit without feeling too guilty. 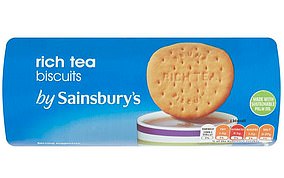 A good old-fashioned rich tea is a great healthier choice as they’re low in sugar and saturated fat. This is because, unlike most biscuits, they are made with vegetable oils rather than butter. Portion control is still important though. 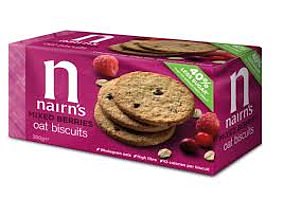 Nairn’s biscuits are low in saturated fat and sugar, and are a source of fibre thanks to the oat base.

Since the dried fruit makes up only 4 per cent of the biscuit, it doesn’t add much nutritional value.

By Alice Jaffe for The Daily Mail