Looking at blue light from phones, laptops and TVs at night may not be as bad for your sleep as originally feared, scientists claim.

A study on mice found dim blue lights actually had less of an effect on the animals’ body clock than equally bright yellow lights.

This flies in the face of research suggesting warmer tones, like those used in ‘night modes’, are less likely to keep people up at night.

Instead, such software which changes screen colours of electronic gadgets as the evening sets in could confuse the brain and affect our sleep. 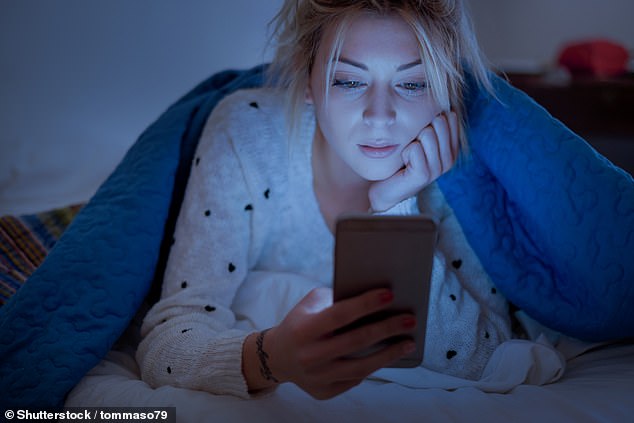 ‘The common view that blue light has the strongest effect on the clock is misguided,’ said Dr Tim Brown, from the University of Manchester.

‘In fact, the blue colours that are associated with twilight have a weaker effect than white or yellow light of equivalent brightness.’

Dr Brown and his colleagues said natural light during twilight – the period between sundown and night – is blue, so blue light at night was actually more natural.

The common belief is blue light imitates daylight and reduces levels of melatonin, a hormone which regulates the body clock and is naturally lower by day.

Light emitted by phones or tablets at night causes sugar cravings and could lead to weight gain, a study on rats suggested in July.

Just one hour of exposure to blue light – the artificial light given off by technology – was found to affect a rat’s appetite and make it more likely to eat unhealthy food the next day.

Their blood sugar levels also shot up, suggesting the animals were unable to process the sugar in their body, a warning sign of pre-diabetes.

The study by the University of Strasbourg was presented at the annual conference of the Society for the Study of Ingestive Behavior (SSIB) in Utrecht, Netherlands.

Rats were given a choice of what to eat and, after the exposure to blue light, the male rats drank more sugar than during the nights with no blue light exposure, according to the researchers.

This can in turn make people still feel awake and alert when their bedtime eventually rolls around.

But the Manchester researchers found blue light actually had less of an impact on the light-sensitive melanopsin protein in the eye, which helps the brain regulate its hormones.

The mice used in the study had longer ‘circadian periods’ – longer waking periods – when they were exposed to yellow light instead of blue light.

So switching your smartphone to night mode may actually confuse the brain, by dimming the light and using colours we more closely associate with daytime.

‘There is lots of interest in altering the impact of light on the body clock by adjusting the brightness signals detected by melanopsin,’ Dr Brown said.

‘But current approaches usually do this by changing the ratio of short and long wavelength light; this provides a small difference in brightness at the expense of perceptible changes in colour.

‘We argue that this is not the best approach, since the changes in colour may oppose any benefits obtained from reducing the brightness signals detected by melanopsin.

The research was published in the journal Current Biology.