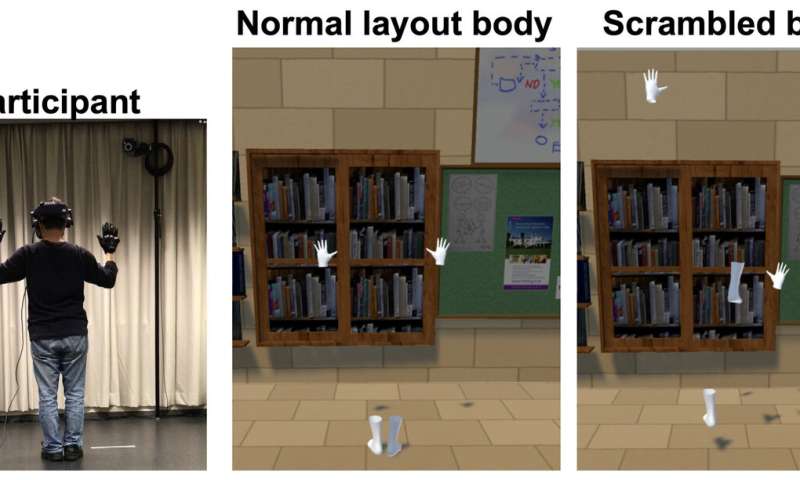 A research team recently investigated the difference between the sense of ownership of the whole body and the sense of ownership of body parts using scrambled body stimulation. Only the observer’s hands and feet were presented, and their spatial arrangement was randomized. It was found that observing the scrambled body stimulus while moving the whole body produces a sense of possession of the body part with respect to the hands and feet, but cannot sense possession of the whole body. This result suggests that spatial arrangement is important for the illusion of whole-body ownership. In addition, a person’s bodily self-consciousness may be affected by the spatial arrangement of one’s own body. The results of this study were published in the open access journal Scientific Reports in 24th March 2020.

Whole-body ownership is an important phenomenon to examine bodily self-consciousness. However, differences between ownership in body parts and ownership in the whole body are not completely understood as there is no effective method to separate these senses of ownership.

Therefore, the research team aimed to develop a method to separate the ownership of body parts from the ownership of whole body. Based on their previous study (Kondo et al., Scientific Reports, 2018) on transparent body stimulation, the team conducted a scrambled body stimulation that randomly rearranges the positions of hands and feet. Then, in order to compare it with the stimulus of the same arrangement as the normal body, synchronization with the physical movement was controlled.

In experiment 1, 16 volunteers observed limb-only stimuli from a third-person perspective (2 meters behind the stimuli) on a head-mounted display. As a result, when vision and physical movement were synchronized, scrambled body stimulation produced only body part ownership (It felt as if the virtual limbs were of their body), whereas normal placement body stimulation produced both body part ownership and whole-body ownership (it felt as if the space between the limbs was their body). Similar results were obtained in experiment 2, in which 16 participants observed the stimulus from a first-person perspective. Thus, humans can have ownership of body parts even if the body parts are scrambled, but cannot have the whole-body ownership. However, there was no significant difference in any of the skin conductance response measurement experiments for threat stimuli in experiment 3, conducted on 20 participants.

These results suggest that a spatial placement is necessary for whole-body ownership, but not necessarily for body-part ownership. Therefore, a person’s bodily self-consciousness might be restricted by the spatial arrangement of normal body parts. However, the limitation of this study was that there was no difference in skin conductance (physiological) response to a threat stimulus.