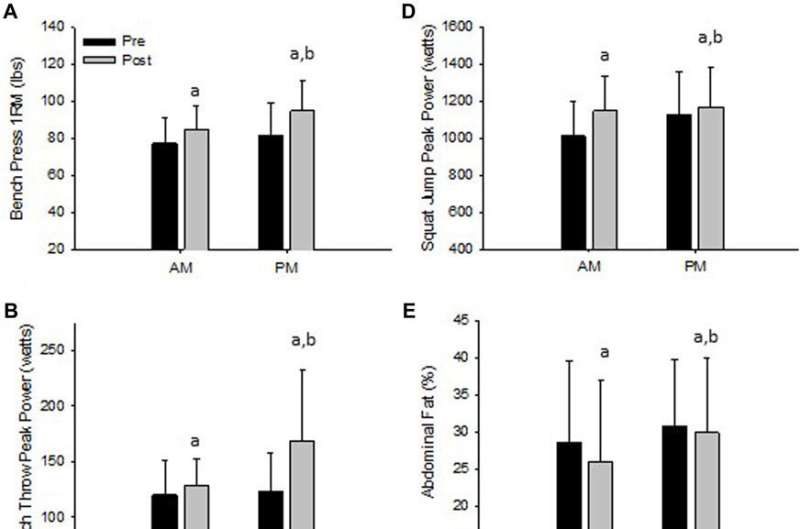 When should I fit exercise within my daily schedule? For most, the answer depends on our family’s schedule and working hours, and perhaps on whether we’re “larks” or “night owls.” But over the past decade, researchers have found that much more hangs on this question than these constraints. That’s because recent findings suggest that the effectiveness of exercise depends on the time of day (Exercise Time Of Day, ETOD).

Now, a randomized controlled trial not only confirms convincingly that ETOD affects the effectiveness of exercise, but also shows that these effects differ between types of exercise, and between women and men. The results are published in Frontiers in Physiology.

“We also show that for men, evening exercise lowers blood pressure, the risk of heart disease, and feelings of fatigue, and burns more fat, compared to morning exercise.”

The authors recruited 30 women and 26 men to participate. All were between 25 and 55 years old, healthy, highly active, nonsmokers, and with normal weight. They were trained by coaches over 12 weeks, following the RISE program previously developed by Arciero et al.: depending on day of the week, either 60min of resistance (R) training, sprint interval (I) training, stretching (S) training, or endurance (E) training. Wednesdays, Saturdays, and Sundays were rest days. The participants followed a specially designed meal plan with a protein intake between 1.1 and 1.8g per kg body weight per day.

Importantly, female and male participants had been independently randomized beforehand to either of two regimes: exclusively training in the morning (60min between 06:30 and 08:30), or in the evening (between 18:00 and 20:00). Those assigned to morning exercise breakfasted after exercise, and ate three further meals at four-hour intervals. Those assigned to evening exercise ate three meals at four-hour intervals before training, plus another afterwards.

At the start and end of the trial, participants were comprehensively assessed for their aerobic power, muscular endurance, flexibility, balance, upper and lower body strength and power, and jumping ability. Only 16% of the 56 enrolled participants dropped out over the course of the 12-week trial, exclusively because they were unable to adhere to this nutrition and exercise schedule.

Besides changes in the participants’ physical and metabolic parameters such as blood pressure, arterial stiffness, respiratory exchange ratio, and the bodily distribution and percentage of fat over the trial, the researchers also measured changes in relevant blood biomarkers, for example insulin, total and ‘good’ HDL cholesterol, C-reactive protein, and IL-6. They also administered questionnaires to the participants, to quantify changes in mood and feelings of food satiety. 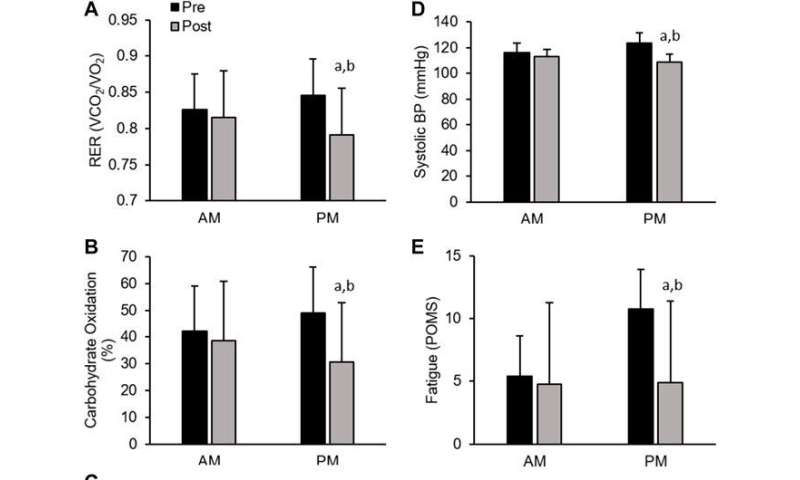 The researchers show that all participants improved in overall health and performance over the course of the trial, irrespective of their allocation to morning or evening exercise.

“Our study clearly demonstrates the benefits of both morning and evening multimodal (RISE) exercise to improve cardiometabolic and mood health, as well as physical performance outcomes in women and men,” said Arciero.

But crucially, they also show that ETOD determines the strength of improvements in physical performance, body composition, cardiometabolic health, and mood.

For example, all female participants reduced their total body fat, abdominal and hip fat, and blood pressure over the trial, but these improvements were greater in morning-exercising women. Only evening-exercising men showed a decrease in their ratio of total to HDL cholesterol, blood pressure, respiratory exchange ratio, and carbohydrate oxidation, as fat became the preferred fuel source.

“Based on our findings, women interested in reducing belly fat and blood pressure, while at the same time increase leg muscle power should consider exercising in the morning. However, women interested in gaining upper body muscle strength, power and endurance, as well as improving overall mood state and food intake, evening exercise is the preferred choice,” said Arciero.

“Conversely, evening exercise is ideal for men interested in improving heart and metabolic health, as well as emotional well-being.”