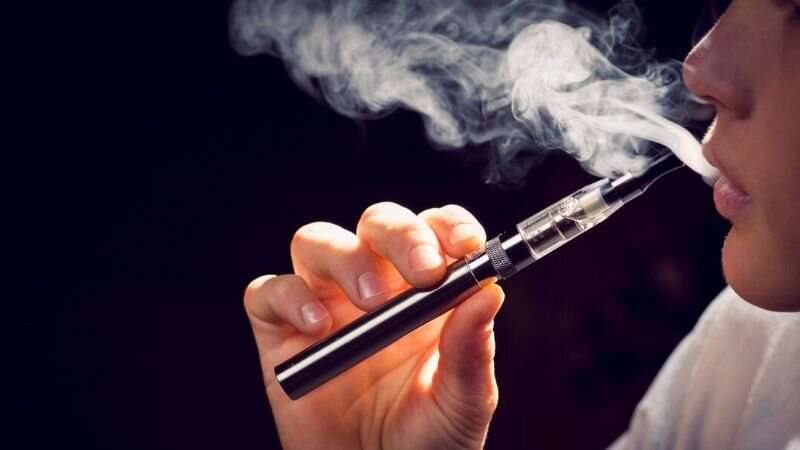 Using data from a large federal government telephone survey of adults, Johns Hopkins Medicine researchers report evidence that inhaling heated tobacco vapor through e-cigarettes was linked to increased odds of asthma and chronic obstructive pulmonary disease (COPD), conditions long demonstrated to be caused by smoking traditional, combustible cigarettes. The data, the researchers say, also suggest that odds of developing COPD may be as much as six times greater when people report they both vape and smoke tobacco regularly, compared with those who don’t use any tobacco products at all.

Reports on the studies are published Jan. 2 in the American Journal of Preventive Medicine and on Oct. 16 in BMC Pulmonary Medicine.

For both studies, the researchers caution that they weren’t designed to show that vaping directly causes lung disease, but only whether doing so was associated with an increased likelihood of having disease. The researchers also didn’t distinguish between vaping tobacco compared with cannabis. They also cautioned that self-reports via telephone surveys may not be wholly reliable. However, they say their findings demonstrate the need for continued research with e-cigarette users over time to confirm and clarify the risks.

“Although e-cigarettes may turn out to be safer overall than traditional combustible cigarettes, our studies add to growing evidence that they carry health risks,” says Michael Blaha, M.D., M.P.H., professor of medicine at the Johns Hopkins University School of Medicine. “These studies are the first in a series of larger and long-term studies that will more definitively provide evidence to inform tobacco users and regulators.”

Asthma, marked by inflammation of the airways and shortness of breath, affects an estimated 25 million Americans, and life-threatening episodes can be triggered easily by pollution, allergies and smoking. COPD, which affects some 16 million Americans, describes a group of disorders including emphysema and chronic bronchitis that make it hard to breathe due to permanent damage to the lungs over time. Rates of asthma and COPD are rising worldwide, according to the World Health Organization. Most cases of COPD result from smoking traditional cigarettes.

A study published by Blaha earlier this year in the Annals of Internal Medicine estimated that 1.4 percent of people, or about 1.9 million people in the U.S., solely use e-cigarettes. Scattered reports have linked the practice to a spike in respiratory illnesses dubbed EVALI (e-cigarette, or vaping, product use-associated lung injury), affecting more than 2,500 people and associated with numerous deaths, according to the Centers for Disease Control and Prevention. Because vaping and the products inhaled with it are still relatively new to the market, its safety remains unclear.

To shed some light on the risk, the researchers took advantage of national survey data gathered by the Behavioral Risk Factor Surveillance System from 2016 and 2017. This annual survey, commissioned by the U.S. Centers for Disease Control and Prevention, consisted of telephone interviews of more than 400,000 adult participants and provides data on health-related risk behaviors and chronic medical conditions.

For the study published in the American Journal of Preventive Medicine, the researchers analyzed the same data from all the questioned participants. From the more than 700,000 interviewees, about 61 percent reported being never smokers, about 9 percent were current smokers, 30 percent were former smokers, more than 3 percent said they currently used e-cigarettes, and 2 percent said they used both e-cigarettes and smoked. The e-cigarette users were more likely to fall in the age range of 30–34, almost 60 percent were men, 72 percent identified as white, 8 percent as black, 3.5 percent as Asian and 11 percent as Hispanic.

“As a physician, I am most worried about those who use both e-cigarettes and combustible cigarettes because they may end up taking in the most nicotine, which may do the most damage,” says Albert Osei, M.D., M.P.H., a postdoctoral fellow at the Johns Hopkins University School of Medicine and lead author on the study. “Through public health campaigns, we finally had smoking levels down in some populations, but now with the current vaping epidemic, I foresee a whole new previously tobacco-naïve, young generation becoming dependent on nicotine if we do not intensify public health education efforts.”