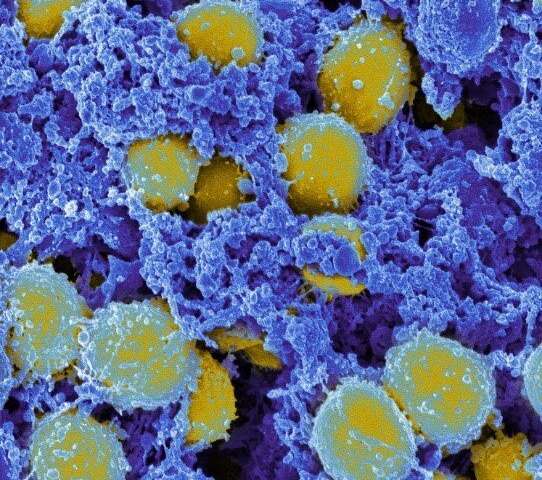 Immunization of mice with a new vaccine consisting of fungal particles loaded with Staphylococcus aureus (S. aureus) proteins protects mice against S. aureus infection, according to a study published August 20 2020 in the open-access journal PLOS Pathogens by David Underhill of Cedars-Sinai Medical Center, and colleagues.

S. aureus is one of the most common bacterial infections worldwide, and antibiotic-resistant strains such as methicillin-resistant S. aureus (MRSA) are a major threat and burden to public health. MRSA not only infects immunocompromised patients but also healthy individuals, and has rapidly spread from the healthcare setting to the outside community. Vaccines aimed at targeting S. aureus have failed in clinical trials, and the reason for this lack of success remains unclear. As this pathogen continues to rapidly spread on a global scale, it is vital that new approaches to S. aureus vaccination are developed. Immunocompromised individuals such as patients with HIV are highly susceptible to S. aureus infections, and they are also at increased risk of developing fungal infections. Based on this evidence, Underhill and colleagues tested whether stimulation of antifungal immunity would promote the type of immune responses needed for effective host defense against S. aureus.

The researchers developed a new vaccine called 4X-SA-GP, which consists of fungal β-glucan particles loaded with four S. aureus proteins. Mice were vaccinated once a week for three weeks with 4X-SA-GP, and then injected with S. aureus either four or eight weeks later. Vaccination induced protective T cell and antibody responses, and the T cell responses in particular were essential for vaccine-induced protection from S. aureus infection. Moreover, the mice had detectable antibody levels and reduced S. aureus levels in the spleen and kidneys eight weeks after immunization. According to the authors, this work potentially broadens the use of the β-glucan particle vaccine system for a much-needed vaccine targeting S. aureus.