US coronavirus deaths hit 130,000 as Florida’s cases DOUBLE in less than two weeks and hospitals in two Texas counties hit FULL capacity over the Fourth of July weekend

More than 130,000 Americans have now died of coronavirus, and 14 states have hit record-high numbers of new daily infections since the start of July, driving the nation as a whole to set a record for the rolling seven-day average number of new cases, for the 27th day in a row, according to The New York Times’s calculations.

Between Friday and Sunday, more than 200,000 coronavirus cases were added to the US tally.

With much of the US partially or completely reopened, Fourth of July revelers are likely to drive new case numbers up even further in the coming days and weeks.

Despite the tragic benchmark of 130,000 COVID-19 deaths in the US, daily death tolls have not yet climbed in correspondence with case surges over the last two weeks in states like Arizona, Florida and Texas. 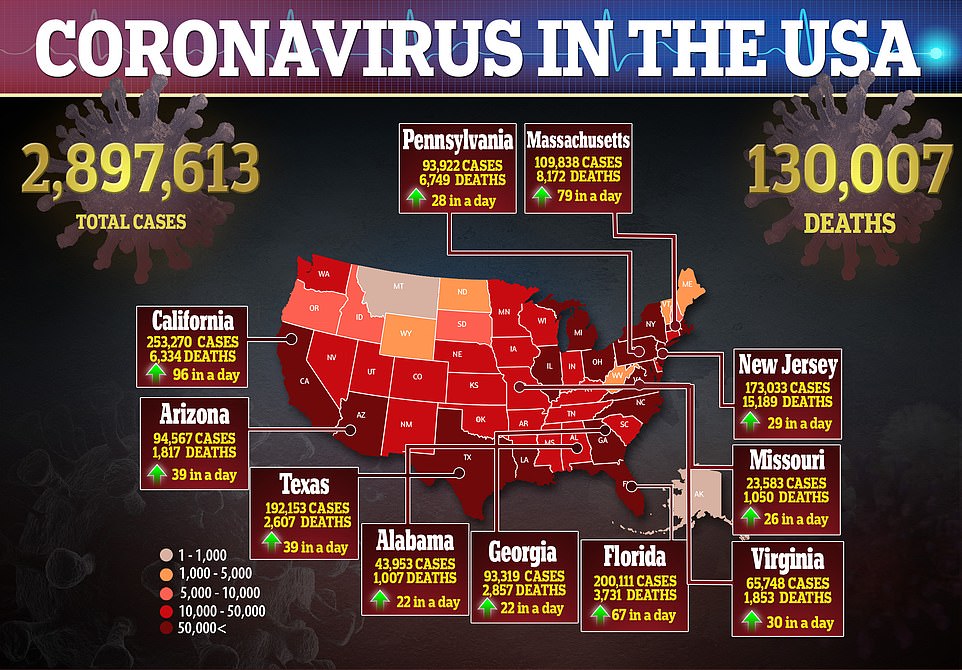 More than 130,000 people have now died of coronavirus in the US. States such as Texas and Florida are seeing dramatic increases in the number of daily infections – though corresponding death increases have not yet been reported 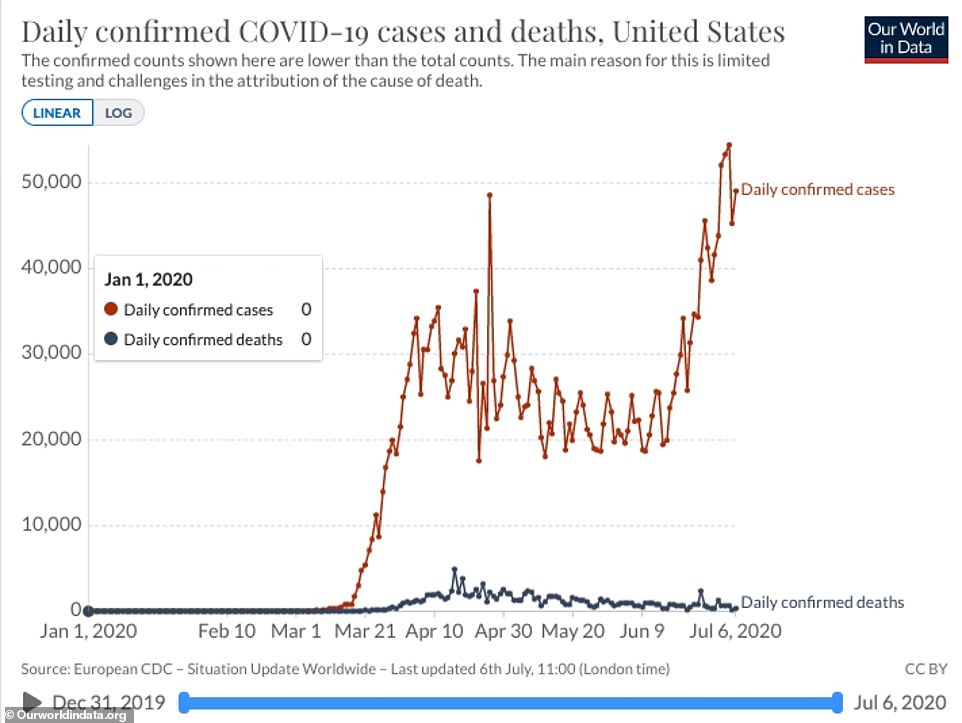 A new uptick in coronavirus cases in the US began in early June (red). Although experts say a lag of 17 days or so days is expected for death increases, daily fatalities have remained largely stable (blue)

Florida has now surpassed Arizona with the steepest and most alarming rise in cases in the US.

Arizona and Nevada also hit their respective record-high numbers of hospitalized coronavirus patients on Sunday, as the Mayors of both Austin and Houston, Texas, warned that their hospitals are on the brink of being overwhelmed.

Daily new case records were also set with alarmingly steep increases seen in states where the virus has been relatively quiet until recently: West Virginia, Tennessee and Montana. 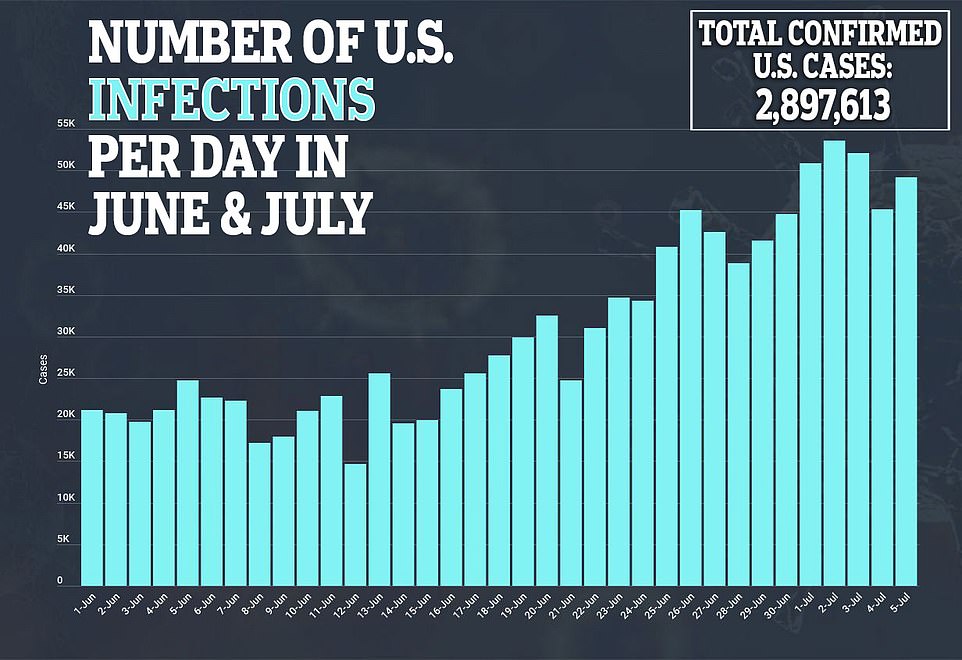 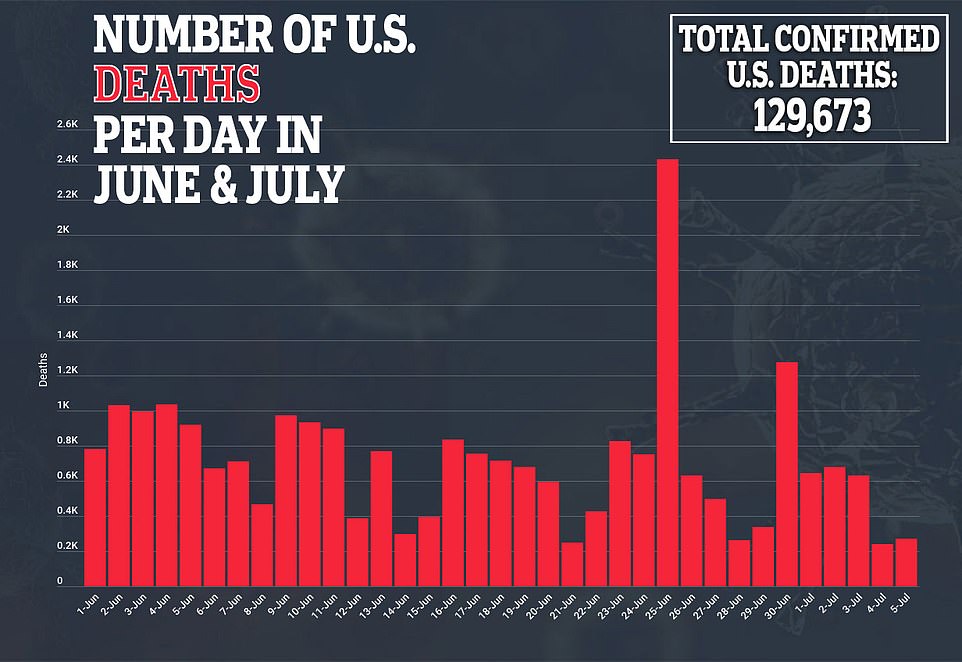 Last week, national attention turned to Arizona and Texas, which each surpassed their previous record numbers of new cases in a single day over and over again.

Now, Florida has once again moved into focus.

On Sunday, the Florida Department of Health confirmed 10,059 new cases of coronavirus.

It was the third-highest number of infections in a single day, behind only the previous day’s report, and the cases reported on Thursday.

As of Monday morning, the state’s health department had added another 6,327 cases, bringing Florida’s total to 203,376.

Both President Trump and the Centers for Disease Control and Prevention (CDC) have put the rising case numbers in many states down to increased testing.

That’s been true in Florida, but does not account for the sharp increase in the proportion of those tests that are coming back positive. 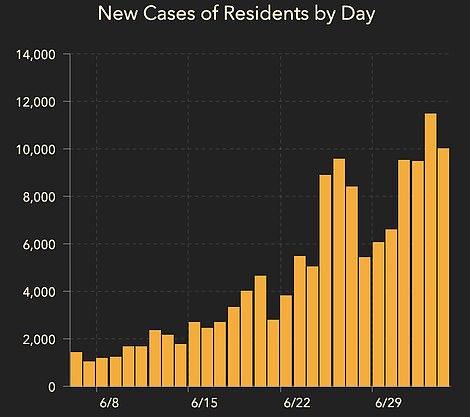 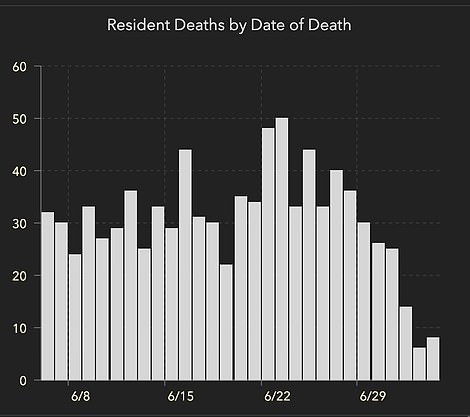 Florida set yet another record high number of daily infections on Saturday (right) but, curiously, corresponding increases in the number of deaths have not yet emerged, even though cases have been rising steadily for more than two weeks 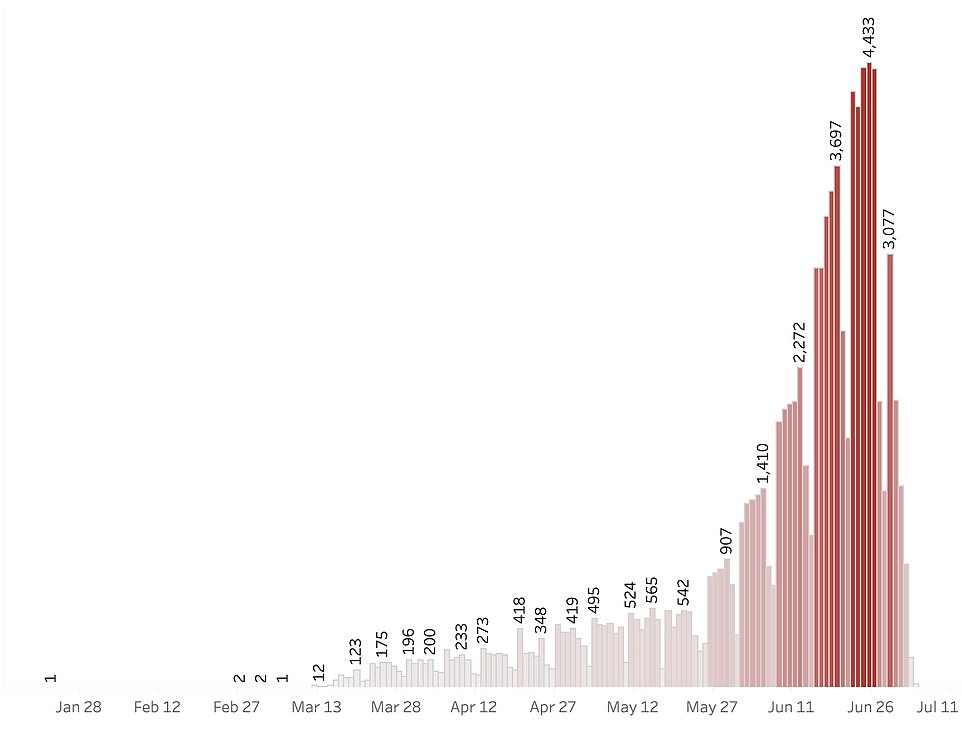 After harrowing spikes in the number of cases in Arizona last week, a relatively low number of new infections were reported over the holiday weekend

Between June 21 and June 27, an average of 9.94 percent of tests administered in the state each day.

Last week, the positive rate increased by nearly half, to 14.7 percent.

Trends in hospitalizations and deaths have moved in the opposite direction, however.

Over the past two weeks, as cases doubled in Florida, the number of daily deaths declined by 82 percent from Sunday to Sunday. Hospitalizations fell by 79 percent over the same period of time.

Experts have warned that hospitalization and death increases will always lag behind increases in the number of cases. One study suggested the lag time between case increases and death increase is about 17 days. It’s been at least 14 since cases began to spike in Florida. 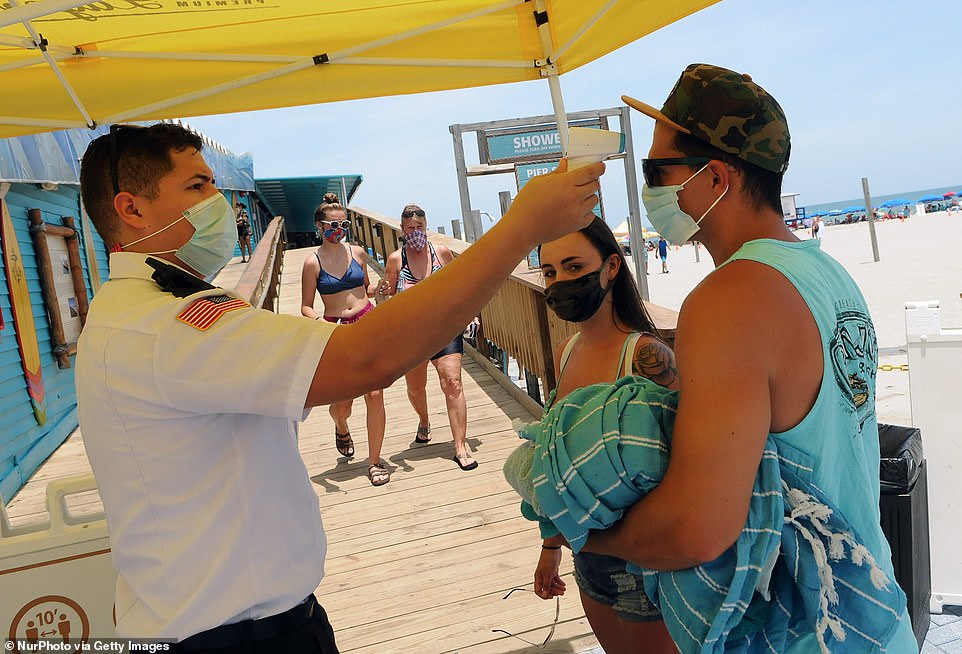 Some Florida beaches, like those in Miami, were closed over the Fourth of July weekend, while others in places Cocoa Beach remained open but required masks and temperature checks (pictured) 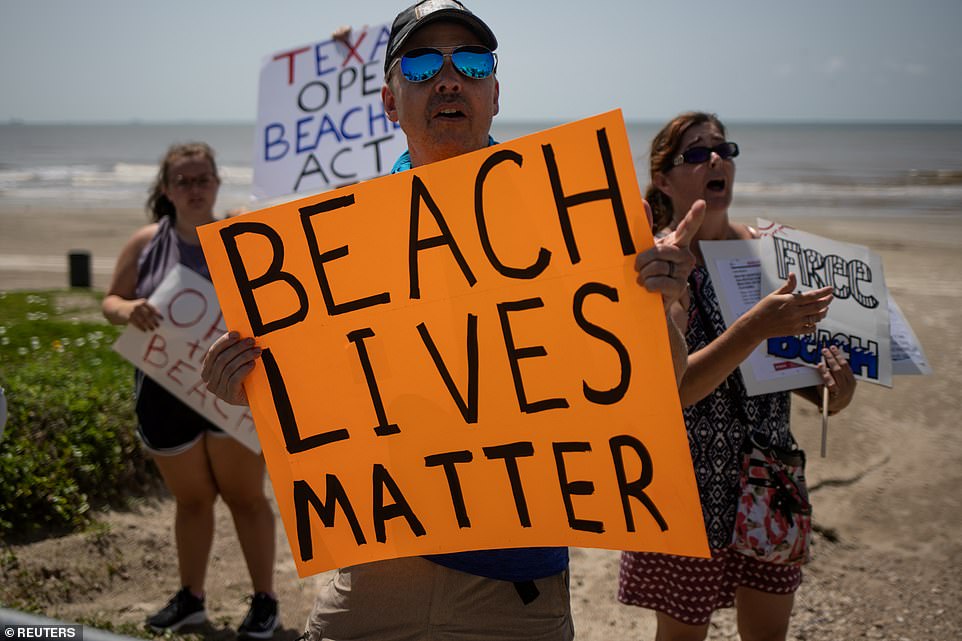 Several oceanside cities and counties in Texas closed their beaches for the holiday weekend, but protestors flouted the orders in Galveston

The state’s beaches remained largely open, per Governor DeSantis’s Tuesday announcement that he would not issue sweeping shutdowns and that Florida was ‘not going back.’

Several South Florida counties closed their beaches any way, including Miami-Dade. Other beaches were less crowded than expected for a typical holiday over the Fourth of July weekend, but certainly still drew plenty of revelers.

Some Florida beaches and piers required temperature checks and mask wearing at their entrances.

As of Monday, Miami closed its restaurants and gyms too, in an effort to stop the wildfire spread of coronavirus in the city.

Texas residents were seen celebrating and even protesting on the states beaches and lakes. 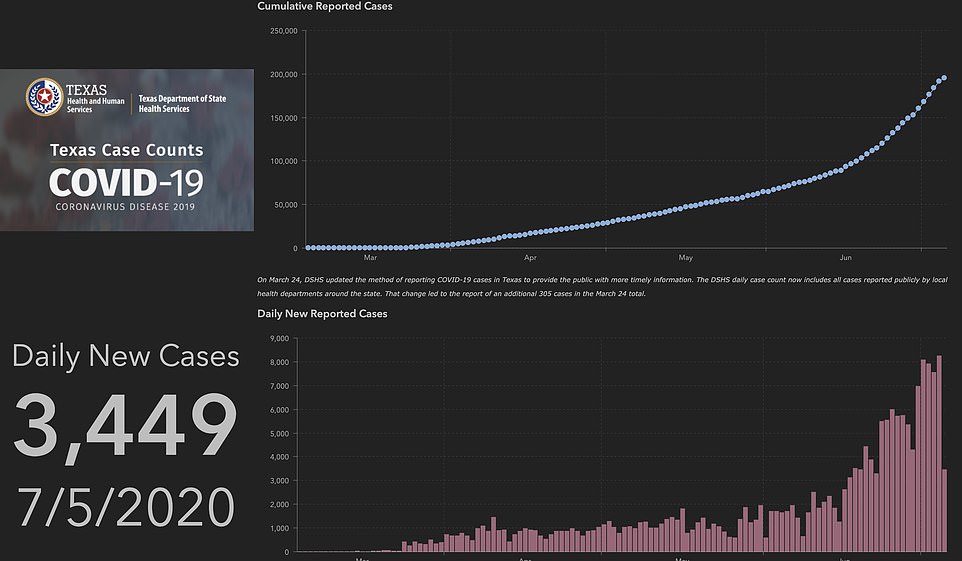 Nevada also hit a record high number of hospitalizations on Sunday, after seeming to quell its outbreak last month

Some cities and counties, such as Galveston, closed their beaches, but there was no official state order, partiers gathered at still-open restaurants and others defied closures by going to beaches in protest.

Nearly 3,550 new coronavirus cases were recorded in Texas on Sunday. Another 8,258 cases were confirmed Saturday, beating the previous record of 8,076 new cases on July 1.

Under increasing pressure, Governor Abbott has paused the state’s reopening plan, a move for which at least one group – the GOP of Ector County in Odessa – has formally ‘censured’ the governor.

The Mayors of Austin and Houston – two of the state’s most populous cities – have issued matching warnings that, if the trajectory the coronavirus outbreaks in Texas continues, every bed in their hospitals will be full and the broader hospital systems overwhelmed within two weeks.