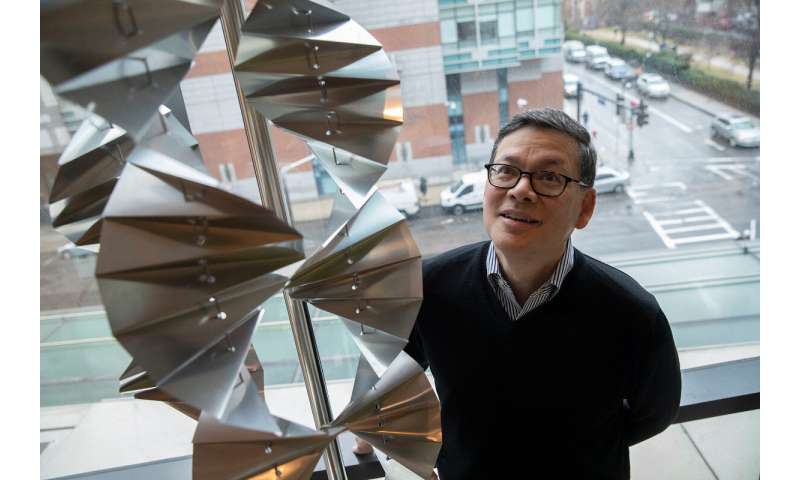 U.S. life expectancy increased in 2018 after a worrisome four-year decline, a reversal owing in part to a welcome decrease in deaths due to overdose but even more so to a drop in those from cancer. The rise brought the anticipated lifespan of someone born in 2018 to 78.7 years, an increase of about a month from 2017 but still short of the 78.9 years reached in 2014. The 2018 figure also included easing in mortality from heart disease and lung disease. The reduction in deaths from cancer, the nation’s No. 2 killer, occurred as rapid advances are being made in treatment with newly developed immunotherapies and precision targeting of tumors’ genetic profiles as well as in detection and prevention. The Gazette spoke to Timothy Rebbeck, the Vincent L. Gregory Jr. Professor of Cancer Prevention at the Harvard T.H. Chan School of Public Health and director of the Zhu Family Center for Global Cancer Prevention, to better understand the good news on the cancer front.

GAZETTE: The National Center for Health Statistics recently said U.S. life expectancy increased in 2018 for the first time in four years. Part of that was due to a drop in overdose deaths. Getting less attention is that the largest single component of the improving picture was a declining death rate due to cancer. Has that been part of a larger trend?

REBBECK: We’ve seen this trend in cancer deaths over years now. Unfortunately, the decline in cancer deaths hasn’t been as steep as, for example, cardiovascular disease deaths, which have really precipitously dropped over the last few decades. The issue, of course, is that cancer is really a series of diseases, so we see a lot of success in some cancers and less success in others. For example, we see a clear trend in declines in lung cancer and smoking-related cancer deaths because of the decrease in smoking over many decades. There’s about a 20- to 30-year lag before declines in smoking translate into declines in cancer mortality, so we’re seeing this huge decrease in smoking rates pay off in a decline in cancer rates. That’s been happening for a number of years.

GAZETTE: So we’re reaping the benefit of changes from decades ago, at least as far as lung cancer goes. How long will we see these declines?

GAZETTE: Vaping is controversial, in that it’s a potential nicotine-delivery system for the young, but it does offer an off-ramp for people who have difficulty quitting smoking. Do you see that playing an important role in smoking rates and ultimately death rates due to lung cancer in the years to come?

REBBECK: Yes and no. What you said is exactly true. It’s controversial because it’s an on-ramp for teens, but it’s an off-ramp for smokers. Now we’re also learning—there’s been a quite a bit of literature in the past year—that there are plenty of carcinogens, plenty of compounds in the vaping itself that are harmful, so it might not be that vaping itself is all that safe. The carcinogens are not at the same level as cigarette smoke, but it isn’t a completely safe mode of delivery of nicotine, and we don’t really understand exactly how those carcinogens play out in lung cancer or other related cancers, like esophageal cancer. At least right now, vaping is not as common as cigarette smoking, so it’s very hard to predict its impact. Obviously, those of us in public health are concerned that we don’t really understand the risks, which appear to be greater than we thought initially.

GAZETTE: What other cancers are in this picture of increasing life expectancy?

REBBECK: There are a few in which we’ve seen some really dramatic changes. Some of these are not that common, but they do play a role in the whole picture of cancer-related mortality decline. One is melanoma. Ten or 20 years ago, if you had disseminated, metastatic melanoma, it was essentially a death sentence, and now it’s a quite treatable disease. It’s been a miracle of therapeutics that metastatic melanoma is now treatable—and the new approaches were actually discovered at Harvard. There are cancers like that, where the treatment advances have been really profound, particularly for fatal disease. That has had an impact on mortality, but it hasn’t had a huge impact because the numbers being treated with these agents are still relatively small. But with some cancers, like pancreatic cancer, we haven’t had the same kind of magical therapeutic advances.

GAZETTE: If these therapies are so new that they’re not used broadly, do you expect their impact to increase in years to come?

REBBECK: Yes, and for a couple of reasons. One is that they’re always improving; there are always new things coming along that will treat more people or treat a spectrum of otherwise-resistant disease. The other is that now, not everybody is getting access, there’s a disparity in who is having access. But we hope that as these therapies become more mainstream, more people will get access to them. If this does not happen, the danger is that cancer health disparities may be exacerbated.

GAZETTE: Are racial and ethnic minority groups part of the trend of increased cancer survival?

REBBECK: Definitely for some cancers, but for others it’s either not clear or we know it’s not the case. For example, in breast cancer, both incidence and mortality now are higher in African American women than they are in whites, and that didn’t use to be the case. Many of the benefits of advanced therapeutics, screening, early detection, and genetic testing, haven’t been shared equally in all populations. African American women, for example, have very high rates of breast cancer mortality. That’s happened over years because of the steep decline in mortality of white women, which hasn’t been reflected in black women. So, we see some clear inequities, not just on a patient-by-patient basis but in population-level data. Myeloma is another example, and there are more like that.

GAZETTE: If you were to list cancers that have a good news story versus those that don’t, what would they be?