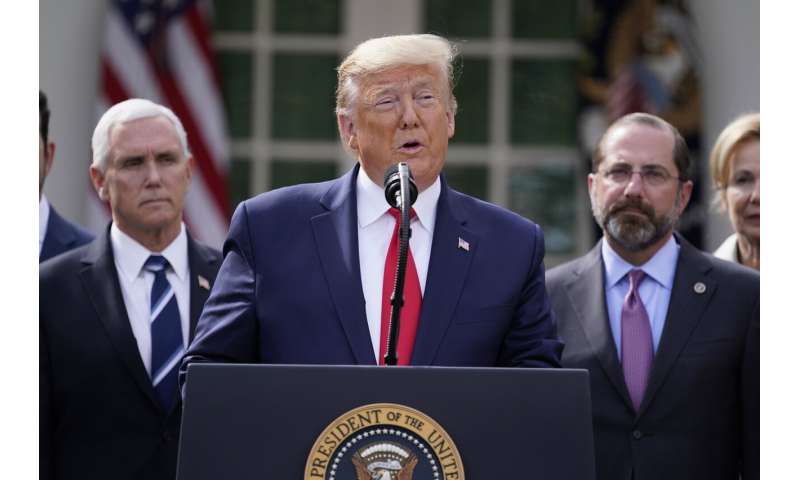 President Donald Trump on Friday declared the coronavirus pandemic a national emergency in order to free up more money and resources as he denied any responsibility for delays in making testing available for the new virus, whose spread has roiled markets and disrupted the lives of everyday Americans

Speaking from the Rose Garden, Trump said, “I am officially declaring a national emergency,” freeing up as much as $50 billion for state and local governments to respond to the outbreak. Trump also announced a range of executive actions to bolster energy markets, ease the financial burden for Americans with student loans and give medical professionals additional “flexibility” in treating patients during the public health crisis.

He also announced a new public-private partnership to expand coronavirus testing capabilities, as his administration has come under fire for being too slow in making the test available. Trump said, “I don’t take responsibility at all” for the slow rollout of testing.

The partnership will include drive-through testing in some locations and an online portal to screen those seeking to get tested.

Trump waived interest on federally held student loans and moved to prop up energy markets, by directing the Department of Energy to buy oil to fill the strategic petroleum reserve “‘right up to the top.” He said he was giving Secretary of Health and Human Services Alex Azar emergency authorities to waive federal regulations and laws as needed, for instance, to allow doctors to practice tele-medicine across state lines.

“Through a very collective action and shared sacrifice, national determination, we will overcome the threat of the virus,” Trump said.

Meanwhile, Trump said the White House and Congress have yet to agree on a broader economic aid package, claiming that he doesn’t believe House Democrats are “giving enough.” Lawmakers are preparing to vote on their own measure Friday. 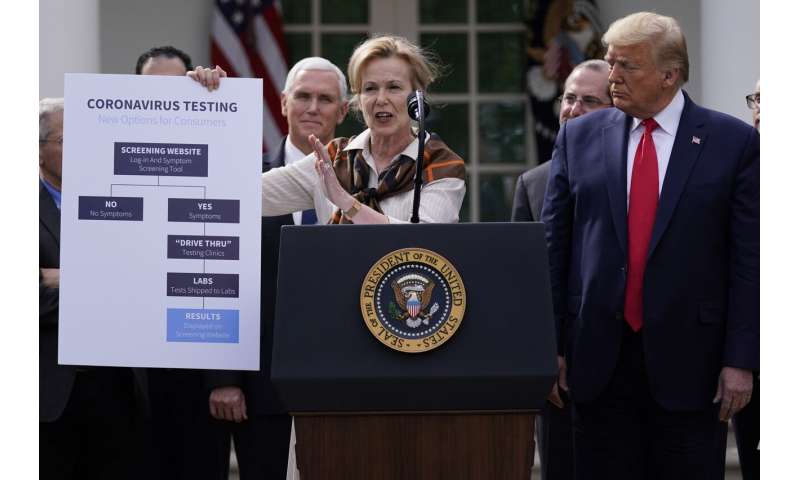 Speaker Nancy Pelosi said Friday the House would approve its coronavirus aid package, imploring the Trump administration and congressional Republicans to “put families first” by backing the effort to provide Americans with relief.

The House Democratic leader spoke from the speaker’s balcony at the Capitol ahead of Trump’s news conference at the White House, as the power centers of Washington were shuttered to visitors.

“Our nation, our great nation has faced crisis before,” Pelosi said. “And every time, thanks to the courage and optimism of the American people, we have prevailed. Now, working together, we will once again prevail.”

Central to the package is free testing for the virus and guaranteed sick pay for workers who are taking time away from jobs, along with an infusion of dollars to handle unemployment benefits and boost food programs for children, families and seniors.

Pelosi and Treasury Secretary Steven Mnuchin, whom Trump tapped to negotiate for the administration, have engaged in around-the-clock negotiations that continued even as Trump was speaking.

But Republican leaders in Congress slowed the deal, wanting assurances that Trump would publicly support the agreement before signing off on it ahead of any vote, according to a top congressional aide unauthorized to discuss the private talks and speaking on condition of anonymity.

“We can only defeat this outbreak if we have an accurate determination of its scale and scope, so that we can pursue the precise science-based response that is necessary to put families first,” Pelosi said. 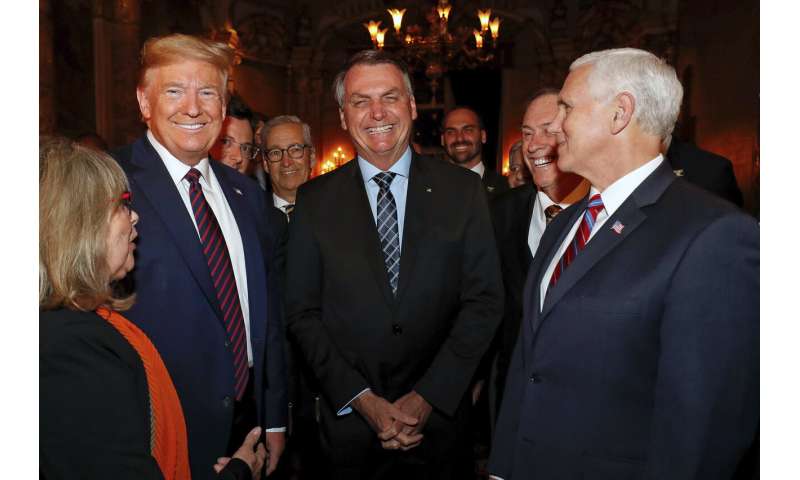 The White House is under enormous pressure, dealing with the crisis on multiple fronts as it encroached ever closer on the president.

The virus has swept in alarming ways across American life, sending the financial markets into a dangerous slide and shuttering schools and sporting events and limiting everyday interactions in communities across the country.

And a personal health scare intensified as White House officials worked to determine the level of exposure by the president and senior aides to several foreign officials who have since tested positive for the virus.

Trump said he was gratified that Brazilian President Jair Bolsonaro tested negative for the virus, after the pair sat next to each other for an extended period of time last weekend. A senior aide to Bolsonaro tested positive. “We have no symptoms whatsoever,” said Trump, who has not gotten tested but said Friday he would “most likely” be tested “fairly soon.”

Australian Home Affairs Minister Peter Dutton, now in isolation at a hospital after testing positive for the coronavirus, had returned to Sydney from Washington, where he met Attorney General WIlliam Barr and Ivanka Trump last week.

White House spokesman Judd Deere said Ivanka Trump, who worked from home on Friday, was evaluated by the White House Medical Unit and it was determined that because she was exhibiting no symptoms she does not need to self-quarantine.

Barr, meanwhile, was staying home Friday, though he “felt great and wasn’t showing any symptoms,” according to his spokeswoman Kerri Kupec. She said the CDC did not recommend testing at this point.

In addition, just days after meeting Trump and Sen. Rick Scott, R-Fla., at the president’s Mar-a-Lago resort, the communications chief for Brazil’s president, Fábio Wajngarten, tested positive for coronavirus. Scott said he was isolating himself. 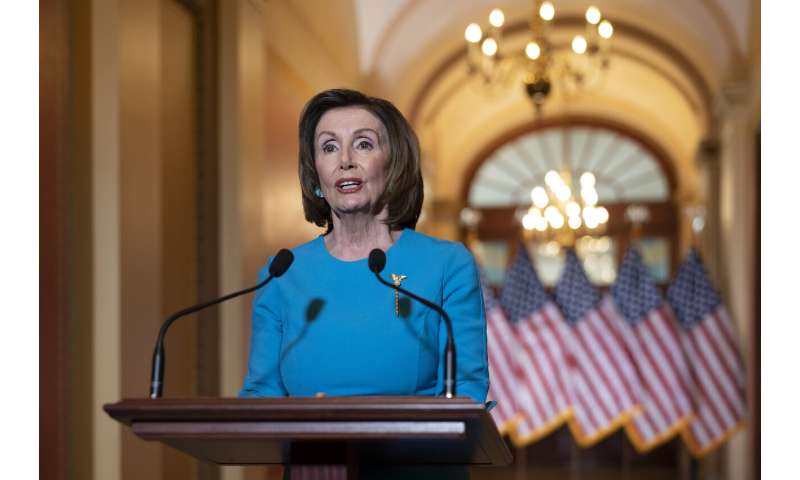 GOP Sen. Lindsey Graham, who was also at Trump’s club on the weekend, joined a growing list of lawmakers who have chosen to isolate themselves as a precaution. He announced Friday that he also met with the Australian official who has now tested positive. And GOP Sen. Ted Cruz of Texas, who had previously isolated himself after a potential exposure at a conservative conference in Washington, said Friday he met with a Spanish official and is now self-quarantining.

Pelosi and Mnuchin continued their constant cross-town phone calls throughout a tense day of negotiations to firm up and salvage the emerging deal that has widespread support from Democrats and some in the business community seeking certainty.

Providing sick pay for workers is a crucial element of federal efforts to stop the rapid spread of the infection. Officials warn that the nation’s healthcare system could quickly become overwhelmed with gravely sick patients, as suddenly happened in Italy, one of the countries hardest hit by the virus.

The ability to ensure paychecks will keep flowing—for people who stay home as a preventative measure or because they’re feeling ill or caring for others—can help assure Americans they will not fall into financial hardship.

Trump’s 73-minute remarks capped a tumultuous week in which Washington strained for a comprehensive response to an outbreak that is testing the nation’s political, financial and health care systems.

Hospitals welcomed Trump’s emergency declaration, which they and lawmakers in Congress had been requesting. It allows the Health and Human Services Department to temporarily waive certain federal rules that can make it harder for hospitals and other health care facilities to respond to an emergency.

Such rules include a Medicare requirement that a patient spend three days in the hospital before the program will pay for care in a nursing facility. Waiving the rule would make more inpatient beds available. Another rule requires doctors and other clinicians to be licensed in the state in which they are providing services. It can be waived if the physician is licensed in another state. 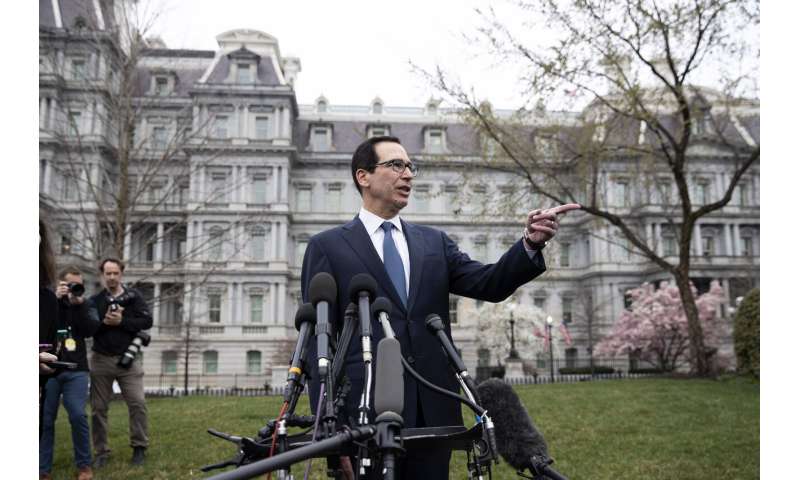 Trump’s actions were also viewed favorably on Wall Street. The Dow Jones Industrial Average’s gains doubled in the last half-hour of trading Friday to nearly 2,000 points, its biggest point gain ever, as Trump outlined steps to expand testing, buy more oil to boost U.S. reserves, ease the economic impact on students and free up billions for states and cities to fight the virus outbreak.

For most people, the new coronavirus causes only mild or moderate symptoms, such as fever and cough. For some, especially older adults and people with existing health problems, it can cause more severe illness, including pneumonia.

The vast majority of people recover. According to the World Health Organization, people with mild illness recover in about two weeks, while those with more severe illness may take three to six weeks to be over it.

Trump has struggled to show he’s on top of the crisis, after giving conflicting descriptions of what the U.S. is doing to combat the virus. On Wednesday he announced he would ban travel to the U.S. from Europe, but aides later clarified that it would have carve-outs for American citizens, permanent residents and some others—and only affect 26 European nations.

Trump on Friday said “we may have to include” the U.K. because of a recent rise in cases. “Their numbers have gone up fairly precipitously over the last 24 hours, so we may be adding that, and we may be adding a couple of others and we may frankly start thinking about taking some off.”

Pelosi promised a third coronavirus package will follow soon, though the House is leaving Washington on Friday for a previously scheduled recess. That measure will include more aggressive steps to boost the U.S. economy, which economists fear has already slipped into recession.

But there’s little appetite within either party for Trump’s proposal to suspend collection of the 6.2% Social Security payroll tax. States are already clamoring for fiscal relief from Washington as the virus threatens their budgets. 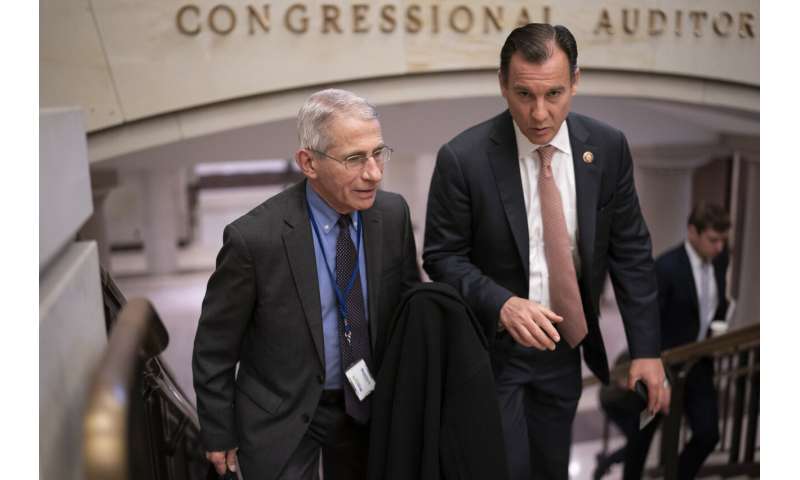 Lawmakers from both parties expressed alarm at the U.S. response, and especially over how few patients have been tested.

Dr. Anthony Fauci, infectious disease chief at the National Institutes of Health, said more tests would be available over the next week, but that officials should not wait before trying to mitigate the virus’ effects.