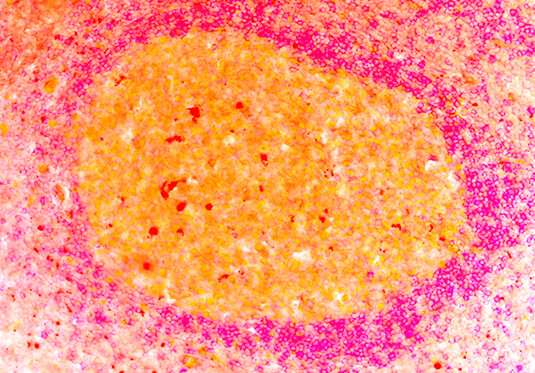 Biomedical researchers at LMU have isolated immune cells from human tonsils obtained following routine surgery, and used them to analyze aspects of the immune response and test the effects of anti-inflammatory agents at the cellular level.

Human tissues that have been surgically removed from patients are normally treated as waste, especially when they are derived from a ‘dispensable’ organ like the tonsils. But LMU immunologist Dirk Baumjohann and his team have a special interest in the pharyngeal tonsil tissue excised during a routine adenoidectomy. The reason for this is that tonsils are part of the lymphatic system. As lymphoid organs, freshly isolated, intact tonsils are a useful source of immune cells, and can serve as a platform for investigating the cell biology of the immune response. The primary immunological role of the tonsils is to provide protection against airborne and ingested infectious agents. As they are directly exposed to such pathogens, they contain much higher frequencies of activated immune cells than are found in the bloodstream.

Dirk Baumjohann, an Emmy Noether Research Group Leader at the LMU Biomedical Center who recently obtained a faculty position at the University of Bonn, is interested in the functional interactions between two major classes of lymphoid cells, called T helper cells and B cells. Among T helper cells, so-called T follicular helper cells play an essential activating role in enabling B cells to produce and secrete antibodies that specifically recognize foreign proteins (‘antigens’) introduced by either infection or vaccination. Conversely, misdirected immune reactions mediated by these cells can cause allergies and autoimmune diseases. B cell activation by T follicular helper cells takes place in what are called germinal centers, which are located in lymphatic tissues such as the lymph nodes, the spleen—and the tonsils.

In the context of a strategic partnership between LMU, the LMU Medical Center, and Sanofi (which also provided funding for the project), the authors of the new study have established a system which allows them to maintain cells isolated from tonsil tissue in culture. The system not only allows researchers to study the processes that underlie the immune response at the cellular level, but it can also be used as a testbed to analyze the impact of drug candidates on the body’s immune defenses. Their findings appear in EBioMedicine, an open-access title issued by the publishers of The Lancet, a leading medical journal. In addition to Baumjohann and members of his group, the authors include specialists based at Sanofi-Aventis Germany, as well as colleagues in the Max von Pettenkofer Institute and the Walter Brendel Center for Experimental Medicine at LMU Munich.

In the study, the researchers tested their system with several drugs that have been approved for the treatment of various inflammatory autoimmune diseases, including rheumatoid arthritis, psoriasis, Crohn’s disease and ulcerative colitis. They showed that these agents suppressed the activity of T follicular helper cells and B cells, thereby confirming the drugs’ anti-inflammatory effect. Inflammatory reactions are mediated by the binding of signal proteins known as cytokines to specific receptors on immune cells. Binding activates various intracellular signaling pathways, which in turn lead to changes in gene expression by altering the set of transcription factors (which control gene expression) available. When the team inhibited pathways triggered by specific cytokines using these drugs, they noted significant changes in the responses of the cells. For example, one particular transcription factor that is critical for T follicular helper cells and B cells in germinal centers was inhibited by several of the agents tested. These results provide new insights into the regulation of human follicular helper cells.

In these experiments, the immunologists made use of small blocks of tonsil tissue, as well as highly concentrated suspensions of dissociated tonsil cells. “Suspensions are easier to handle and we were able to reproduce the results using cell material that had been stored in the freezer,” says Angelika Schmidt, a post-doc in Baumjohann’s group and lead author of the study.