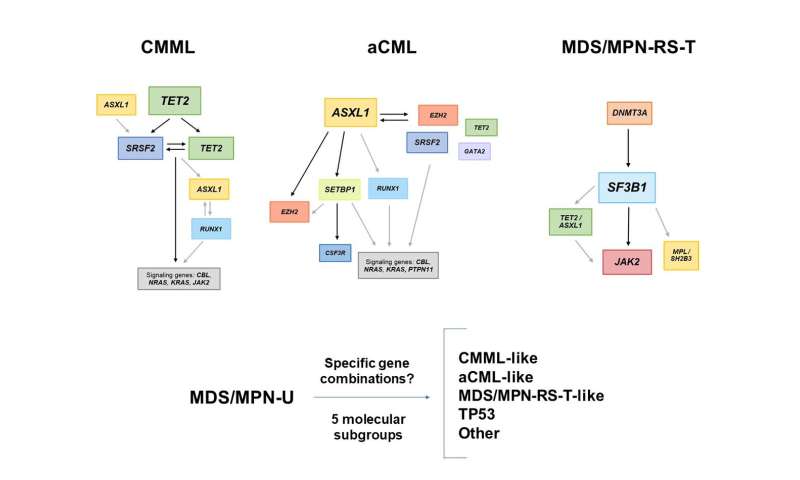 Myelodysplastic/myeloproliferative neoplasms (MDS/MPN) are a group of rare malignancies with overlapping features from myelodysplastic syndromes (MDS) and myeloproliferative neoplasms (MPN) that include a variety of diseases depending on their phenotype (hematological and morphological characteristics). Adult MSD/MPN include chronic myelomonocytic leukemia (CMML), atypical chronic myeloid leukemia (aCML), MDS/MPN with ring sideroblasts and thrombocytosis (MDS/MPN-RS-T) and MDS/MPN unclassifiable (MDS/MPN-U).

Due to an overlap in features among these diseases, as well as with MDS and MPN, differential diagnosis remains a challenge. For hematologists, deciding on a diagnosis of these rare malignancies is a broad process that involves the use of different tests and techniques—a long road of analyses, tests, prognosis evaluations, and decision making. In the end, the lack of knowledge that could allow a more precise and fast diagnosis to decide the best treatment and enhance good prognosis prolongs the patient’s pain.

Laura Palomo and her colleagues from the MDS Group coordinated by Francesc Solé, from the Josep Carreras Leukemia Research Institute, in a study led by Torsten Haferlach and his team from the Munich Leukemia Laboratory (MLL), have recently published a study in the Journal Blood that reveals the molecular landscape of these diseases and the combination of genes exclusively mutated in each of these rare neoplasms. These findings provide a useful tool to complement current diagnostic workups in MDS/MPN patients.

“In previous studies, over 90% of MDS/MPN harbored somatic mutations in a group of known genes, which are related to their pathophysiological features and play a role in their clinical heterogeneity, but none of them was specific to MDS/MPN. In our study, made with whole-genome data from a cohort of 367 patients with MDS/MPN, we identified genotype-phenotype associations and potential diagnostic and prognostic molecular markers that could translate to medical practice. We also wanted to provide novel insights into the clonal hierarchy of mutations of MDS/MPN,” Says Laura Palomo.

Researchers found recurrent combinations of mutations exclusive to some extent to CMML, aCML, and MDS/MPN-RS-T, while MDS/MPN-U show heterogeneous features that overlap with the other MDS/MPNs, but that can be classified according to their molecular profile. For Palomo, “It is imperative to include targeted DNA sequencing techniques in clinical hematology laboratories to improve the diagnosis and risk stratification of these hematological malignancies.”