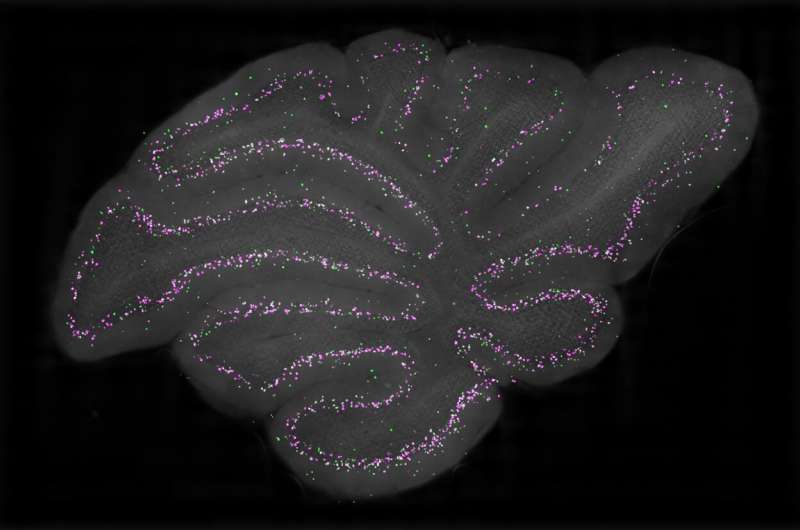 Recent scientific and technological advances have led to the development of increasingly sophisticated tools to conduct neuroscience research. These new methods are helping neuroscientists to better understand the functions and organization of specific cell populations in the brain.

Candelabrum cells are a specific type of interneurons in the cerebellar cortex with a unique shape and morphology, which was first identified approximately three decades ago. Although several research groups have observed and identified these cells, their function and organization are still poorly understood.

Researchers at Harvard Medical School and Broad Institute have recently gathered new insight about this elusive and enigmatic cell population. Their observations, published in Nature Neuroscience, were enabled by the use of a genetically encoded fluorescent label discovered by Stephanie Rudolph, who was a post-doctoral fellow at Harvard Medical School at the time of the study.

“Stephanie’s discovery allowed us for the first time to record electrical activity and synaptic connections of candelabrum cells and to correlate existing molecular information of these interneurons with their physiology,” Tomas Osorno and Stephanie Rudolph, two of the researchers who carried out the study, told MedicalXpress. “We were very excited about this opportunity, as little was known about these small interneurons that were previously impossible to visualize.”

Osorno, Rudolph and their colleagues carried out their experiments on adult mice. To examine the brains of these mice, they used three complementary approaches, which are commonly employed by neuroscientists and medical researchers worldwide.

“First, we used acute cerebellar slices, which preserve the local circuits and allow us to study the properties of candelabrum cells and how they are connected to other cell types,” Osorno and Rudolph explained. “Additionally, we used serial electron microscopy, which is a structural approach that confirmed the connectivity findings of our brain slice experiments. Finally, we used single nuclei RNA sequencing to learn the molecular identity of candelabrum cells and how they relate genetically to other neuron types of the cerebellar cortex.”

Using their combined experimental methods, the researchers were able to gather new insights about the electrophysiological properties and synaptic connections of candelabrum cells. Additionally, they found that candelabrum cells are the most common interneuron in the Purkinje cell layer of the cerebellum and that they can be found in all cerebellar lobules.

The team’s observations show that this elusive type of cell is GABAergic, which means that it releases an inhibitory neurotransmitter. They also highlight these cells’ unique molecular make-up and prove that they are highly sensitive to synaptic inputs.

In particular, candelabrum cells are excited by mossy fiber inputs and granule cells, but strongly inhibited by Purkinje cells. They also inhibit molecular layer interneurons, leading to the disinhibition of Purkinje cells.

Overall, the findings gathered by this team of researchers suggest that all inputs, outputs and local signals in the cerebellar cortex converge onto candelabrum cells, which could mean that they play an important part in controlling cerebellar activity. In the future, these observations could inspire other research teams to examine the functions, properties and connections of candelabrum cells further.