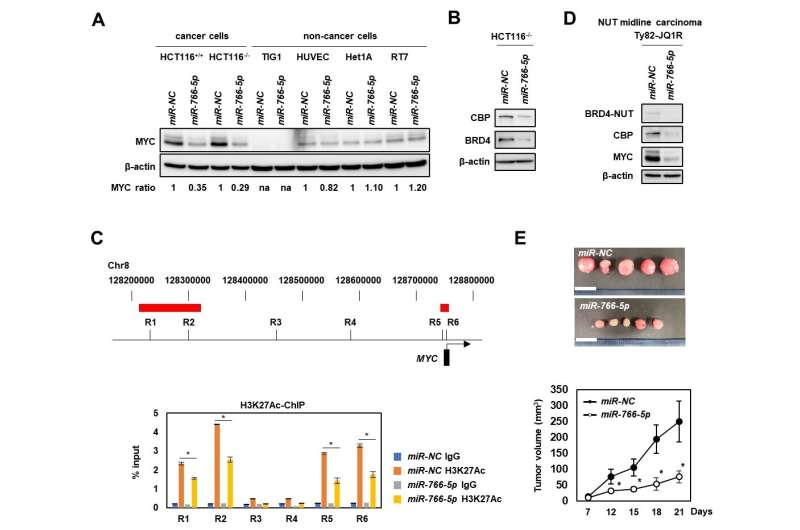 In a recent study published in Cancer Research, a team led by researchers at Tokyo Medical and Dental University (TMDU) identified a specific small RNA molecule, called a microRNA (miRNA or miR), that has the potential to be used as an anti-cancer therapeutic. The new research indicates that the molecule, called miR-766-5p, can significantly reduce levels of the oncogene MYC—a specific gene that is expressed at high levels in tumor cells and helps fuel cancer growth and progression.

At its most basic level, cancer is driven by abnormal and uncontrolled gene expression. Numerous different molecular mechanisms contribute to the activation and overexpression of oncogenes in cancer. MiRNAs work as negative regulators of gene expression. This means that they can directly bind and interact with certain gene messages and block them from being translated into a protein. Therefore, any molecular pathway controlled by that specific protein is also affected by this miRNA-mediated regulation. In a previous study, the TMDU group used cell culture experiments to demonstrate that treating cancer cells with miR-766-5p resulted in lower MYC expression and inhibited cancer cell growth rates. Following these intriguing findings, the group aimed to determine the specific mechanism behind these results.

“MYC is a critical oncogene in many tumor types,” says lead author of the study Yasuyuki Gen. “It can promote cancer cell proliferation, can suppress the body’s immune response to fighting the cancer, and can generally be the main driver of tumor progression in many patients.”

The researchers found that miR-766-5p could directly target and reduce expression of two proteins called CBP and BRD4. CBP can induce a molecular change called acetylation that causes DNA to become more “open”, which allows genes present in that area to be more easily expressed. BRD4 can then be recruited to these sites and help promote transcription of these gene messages. 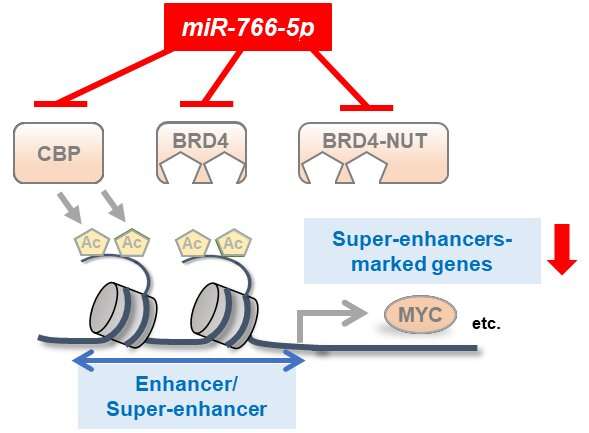 “Areas of DNA with high activity of proteins like CBP and BRD4 are known as super-enhancers,” explains Johji Inazawa, senior author. “Many cancer cells develop super-enhancers near oncogenes, like MYC, that drive increased oncogene expression and therefore promote cancer.”

The team then experimentally treated cells with a synthetic version of miR-766-5p, finding that the resulting suppression of CBP and BRD4 caused decreased MYC levels in cancer cells, but not in normal cells. Additionally, tumors that were engrafted in lab mice showed significantly suppressed growth when treated with miR-766-5p compared with a control miRNA.

“Our findings suggest that miR-766-5p-mediated control of CBP and BRD4 blocks formation of the super-enhancers that contribute to MYC overexpression in cancer cells,” explains Gen.