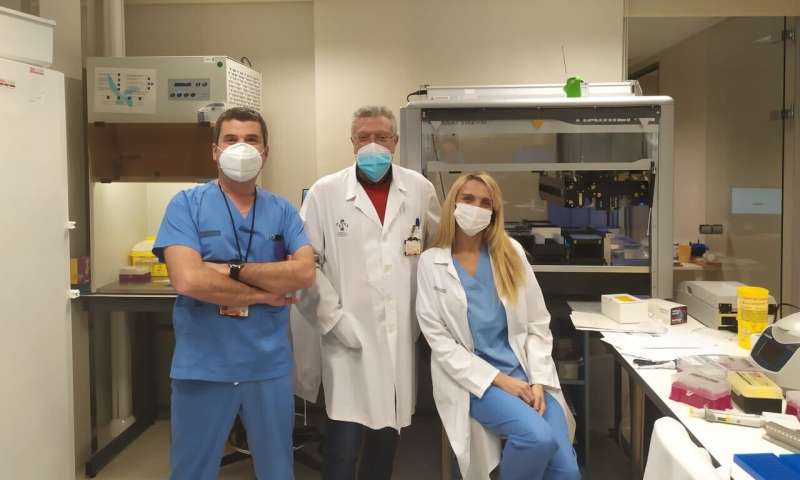 A research group of the Foundation for the Promotion of Health and Biomedical Research of Valencia Region (FISABIO) and the Hospital Arnau de Vilanova has released a pioneering study, which for the first time links the development and progression of colon cancer with a low level of lymphocytes known as gamma delta T cells.

Gamma delta T lymphocytes are immune cells that act in the first line of immune defense in the mucosa, against both infections and cancer. Moreover, they are present in the blood.

The study, published by the prestigious scientific-medical research journal PLOS ONE, found that people affected with colon cancer have lower levels of these T lymphocytes in their peripheral blood than the healthy people in the control group. Therefore, if this pattern were replicated in the colon tissues, where the gamma delta cells are predominant, the loss of these lymphocytes would imply an immunodeficiency that would facilitate the development and progression of the tumor.

The principal researcher of the Research Unit of the Hospital Arnau de Vilanova, Juan Carlos Andreu Ballester, said, “The study shows that before taking any treatment, the patients with cancer who were studied presented very low gamma delta T cells levels compared to the healthy subjects studied. The difference was significantly noticeable for a group of T lymphocytes called cytotoxins, which are responsible for destroying cells infected by the virus or in the malignization progress.”

The conclusions also show the importance of these cells as an immune mechanism against the development or progression of colorectal cancer. In addition, a part of this investigation studies in depth which is the best state for T lymphocytes to fight against tumor cells. The results strengthen the use of gamma delta cells as a therapeutic option in the treatment of colon cancer.

Regarding these therapeutic possibilities, Dr. Juan Carlos Andreu-Ballester, says, “We are now doing clinical trials with gamma delta T lymphocyte against tumors. Differentiation stages are interesting because it is important to know in which stage a lymphocyte must be to be used in an adoptive immunotherapy.”

Differentiation stages refer to the characteristics developed by these cells at different times. That is why this information gathered by the article is essential for therapeutic uses.

In addition, the research reveals a growing apoptosis, that is, programmed cell death of this group of gamma delta T lymphocytes that is higher in patients with cancer than in the patients of the control group. This finding seems to be an initial mechanism and could be the base for a higher predisposition to the disease.

The results also showed that the fall of gamma delta T cells is associated with microvascular invasions (cancer cells moving to other tissues), history of cancer and synchronous cancer (a cancer developed at the same time as the first cancer detected or within the six months after the diagnosis).