If you want to live longer and feel younger you should consider skipping a meal a day, a study suggests.

Researchers found restricting calories by a third in rats enhanced their immune systems, slashed inflammation and delayed the onset of age-related diseases.

While the benefits of eating less on lifespan have long been established, the study was the first to study the exact effect it has on a cellular level.

The international team of scientists, from the UK, US and China, now hope to apply their findings to humans. 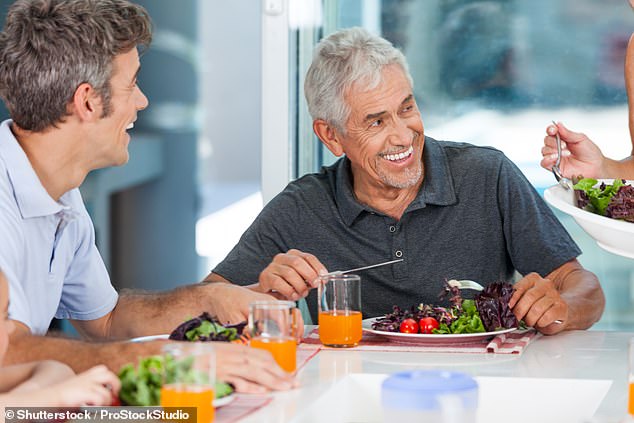 If you want to live longer and feel younger you should consider skipping a meal a day, a study suggests (file)

It’s something that many have only dreamed of.

But now scientists believe they may have found a way to reverse the signs of aging.

Researchers at the University of Kentucky in Lexington were able to back-track the inevitable process and prevent memory decline in rats.

Published in The Journal of Neuroscience, the study showed that preventing wrinkles could be as easy as expressing a protein called FKBP1b.

The protein regulates calcium levels in the hippocampus – a region of the brain that is considered responsible for memory.

The research involved injecting rats, which are deemed medically similar to humans, with the experimental protein.

It was found to stop cognitive decline in rats given the treatment at 13 months – before memory is hampered by old age.

And in those rodents who were injected when the deterioration kicked in, the mental decline – similar to that of dementia – was reversed.

A separate analysis also revealed how the FKBP1b treatment restored activity in 876 genes thought to switch off in old age.

Further tests showed the levels of expression in these genes were similar to that in younger rats who weren’t given treatment.

Ageing is the highest risk factor for many human diseases, including cancer, dementia, diabetes and metabolic syndrome.

Caloric restriction has long been shown in animal models to be one of the most effective interventions against these age-related diseases.

And although researchers knew that individual cells undergo many changes as an organism ages, they have not known how caloric restriction might influence these changes.

Researchers – led by the Salk Institute for Biological Studies in California – isolated and analysed a total of 168,703 cells in 56 rats.

The animals’ diets were controlled from age 18 months through 27 months.

In humans, this would be roughly equivalent to someone following a calorie-restricted diet from age 50 through 70.

In each isolated cell, the researchers used single-cell genetic-sequencing technology to measure the activity levels of genes.

They also looked at the overall composition of cell types within any given tissue. Then, they compared old and young mice on each diet.

Overall, 57 per cent of the age-related deterioration in cells seen in the tissues of normal rats were not present in the calorie-restricted rats.

The number of immune cells in nearly every tissue studied dramatically increased as control rats aged but was not affected by age in rats with restricted calories.

In one type of fat tissue a calorie-restricted diet changed the way anti-inflammatory genes developed, reverting them back to resemble the genetic structure of younger rats.

DOES THIS DIET ALREADY EXIST?

Many experts have advocated a low calorie diet to control diabetes.

The 5:2 diet, aka The Fast Diet, is the best known of the fasts and was made famous by Dr Michael Mosley.

Comprising of five days of regular eating and two ‘fast’ days of 800 calories, it has been associated with improved DNA repair and brain function.

An increase in fat loss was also demonstrated in a 2011 Manchester University study.

Dr Mosley lost 20lb in 12 weeks and saw his blood sugar and cholesterol levels return to normal after being pre-diabetic.

He argues that two days of calorie restriction is achievable for many.

Free radicals – unstable molecules that can damage cells – are released as a byproduct when the body digests food.

Calorie-restricted diets work because the cells are given time to wash away the free radicals, according to the researchers.

Juan Carlos Izpisua Belmonte, senior author of the new paper and a professor in the Gene Expression Laboratories at the Salk Institute, said the findings ‘gives us targets that we may eventually be able to act on with drugs to treat aging in humans.’

‘This approach not only told us the effect of calorie restriction on these cell types, but also provided the most complete and detailed study of what happens at a single-cell level during aging,’ said co-corresponding author Guang-Hui Liu, a professor at the Chinese Academy of Sciences.

‘The primary discovery in the current study is that the increase in the inflammatory response during aging could be systematically repressed by caloric restriction,’ said co-corresponding author Jing Qu, also a professor at the Chinese Academy of Sciences.

‘People say that “you are what you eat,” and we’re finding that to be true in lots of ways,’ says Concepcion Rodriguez Esteban, another of the paper’s authors.

‘The state of your cells as you age clearly depends on your interactions with your environment, which includes what and how much you eat.’

The new results were detailed in the journal Cell.

The team is now trying to utilize their findings in an effort to discover aging drug targets and implement strategies towards increasing life and health span.