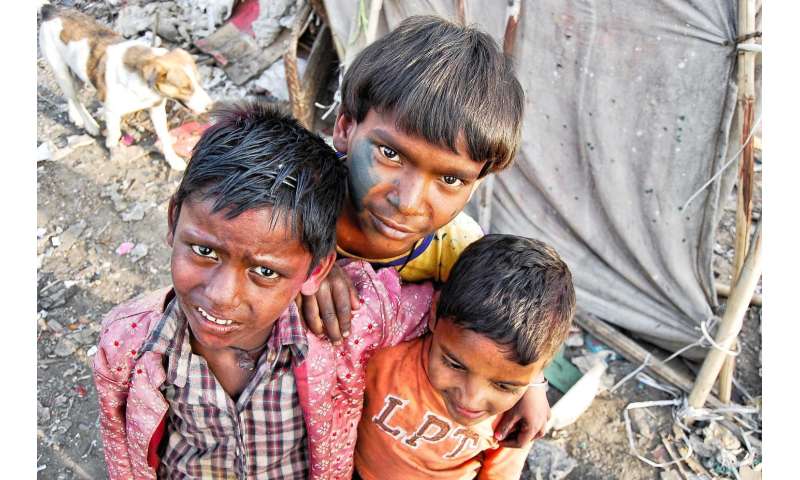 Childhood malnutrition in India remains a major problem. A new study shows that the problem is concentrated in specific geographic areas, which could help policymakers working to address the issue.

Malnutrition is a huge problem in India, with one in five children underweight for their height and nearly two in five children suffering from stunting, which is caused by undernutrition. Although the country is working to address the issue, India lags behind other countries at similar levels of development.

One reason that the problem has proved so intractable may be that malnutrition is not evenly spread across the country or even across states, but rather persists in smaller geographic clusters with high rates of poverty and undernutrition, according to a new study led by IIASA researcher Erich Striessnig in collaboration with former IIASA colleague Jayanta Bora, who is now working at the Indian Institute of Dalit Studies (IIDS), New Delhi.

“Malnutrition is a humanitarian crisis in India. It poses a huge burden to the affected individuals, communities, as well as society as a whole,” says Striessnig. “It also poses an obstacle to development. Children growing up under detrimental living conditions will perform poorly at school and are likely to be less productive later on when they enter the labor force, deteriorating the developmental outlook for the country as a whole.”

The study, published in the journal Spatial Demography, was made possible by new data from the Indian National Family Health Survey, which for the first time included comparable information down to the district level.

“This created a chance to look at the distribution of childhood malnutrition across India at much finer spatial scales than previously available,” says Striessnig.

To explore the data, the researchers used cluster analysis on a wide range of socioeconomic factors. Through this analysis, a pattern of marked spatial clustering among Indian districts emerged. Rather than being evenly spread across states or the nation as a whole, malnutrition is highly concentrated, with districts across most of southern India providing relatively better conditions for growth and improved nutritional status, as compared to districts in the central, particularly rural parts of India along the so called “tribal belt”.

“It’s not surprising that the bad living conditions of those around you also affect your own chances to improve your living conditions and those of your children. If everyone around you lives in a state of disempowerment, the government is unlikely to come and help you. The degree of segregation affects the vulnerability of the worst off,” explains Bora.

The new study also finds that childhood malnutrition was correlated with lower levels of maternal education and access to mass media, as well as, unsurprisingly, household poverty and whether the mother was also underweight.

“What surprised us the most was the clear geographic demarcation of clusters. Without adding any information on climatic zones, which is one of the more important aspects to look into next, the model still identifies very regionally marked clusters,” says Striessnig.

The study could help Indian decision makers to create more strategic investments to more effectively address the problem at the lower administrative level. “The representatives of political parties should pay more attention to this, so that it could help in enriching the sustainable development goals for India,” says Bora.