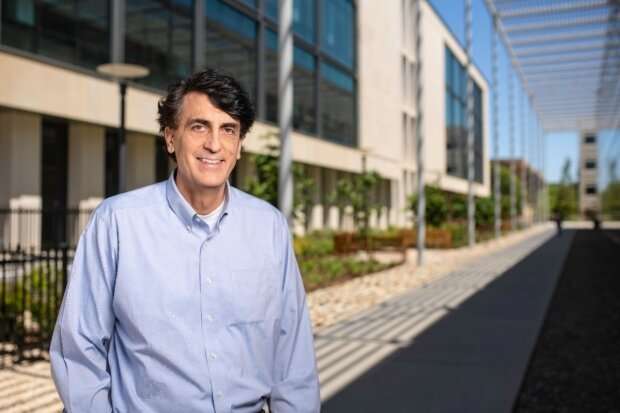 An elite population of cancer cells marshal at the leading edges of a growing skin tumor to guide its metastasis and help it evade the body’s immune system, researchers at the Stanford University School of Medicine have found.

They do so by communicating not just with other cancer cells—goading them to divide and spread—but also with surrounding normal cells, recruiting specialized cells that dampen the immune response and others that promote cancer invasion.

“These cells coordinate the entire cancer process,” said Paul Khavari, MD, Ph.D., professor and chair of dermatology and the Carl J. Herzog Professor in Dermatology in the School of Medicine. “They are highly mobile and highly invasive, and they gather at the edges of the tumor to lead the charge into surrounding tissue. But until now, we didn’t even know they existed.”

For the study, the researchers focused on a common skin cancer called squamous cell carcinoma, which affects more than 1 million people each year in the United States. Although most people are treated successfully, about 1% will eventually die from the disease. Squamous cell carcinoma belongs to a class of cancers known as epithelial cancers, which includes about 90% of all human cancer types.

To understand more about how epithelial cancers grow and metastasize, Khavari and his colleagues combined several techniques to analyze the architecture, cell types and gene expression profiles at the single-cell level of squamous cell carcinomas from 10 people—in effect, not just generating a molecular fingerprint for each cell but also precisely locating it and its neighbors within the three-dimensional space of the growing tumor.

“This told us the whole cast of players—who is where, what they are doing and who they are talking with,” Khavari said. “No one has ever looked at individual cells in concert with where they are and how they are arranged in space.”

They then compared their findings with normal skin from the same people whom the cancers were collected from. The findings are the first time such a comprehensive, integrated analysis has been conducted at the level of single cells, and it gives a never-before-seen glimpse into the cellular interactions both inside and outside the tumor.

The researchers found that the carcinomas differed from normal skin in their types of cells in one main way: In addition to mirroring the normal cell types, they had an additional subpopulation of cells Khavari and his colleagues called tumor-specific keratinocytes, or TSKs. Intriguingly, these TSKs were found primarily at the leading edges of the growing tumor, and they expressed genes that recruit specific cell types to the cancer site.

Some of the recruited cells are regulatory T-cells, or Tregs, which dampen the body’s natural immune response to prevent overreactions that can lead to autoimmune disorders. Others are cells called cancer-associated fibroblasts, which destabilize the extracellular matrix around the tumor and promote metastasis. Still others are endothelial cells, which line the interior of blood and lymph vessels.

‘Paving the way for invasion’

“These TSKs are leading the charge from a special niche environment at the edge of the tumor,” Khavari said. “There they can talk not only to the other cancer cells, but also to cells in the surrounding environment, paving the way for cancerous invasion into surrounding tissue. When we knocked out the ability of these cells to communicate, we stopped the growth of human squamous cell carcinomas that had been transplanted into mice.”

The researchers are now investigating whether their findings extend beyond squamous cell carcinomas.

“Are these tumor-specific cells a feature of most or all epithelial cancers?” Khavari said. “We’re not sure, but we can see that people whose cancers expressed high levels of genes associated with these cells had poorer outcomes.”

The researchers also are interested in learning how to use what they’ve learned in the study to create new, targeted therapies.