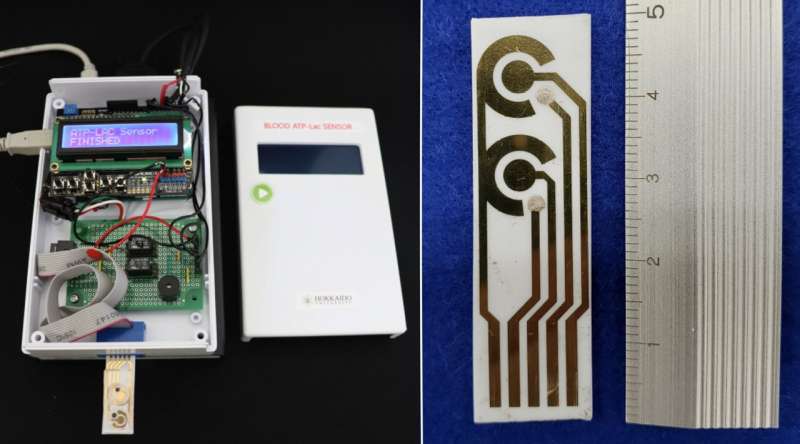 Scientists have developed a prototype sensor that could help doctors rapidly measure adenosine triphosphate (ATP) and lactate levels in blood samples from patients, aiding in the rapid assessment of the severity of some diseases.

Hokkaido University scientists and colleagues have designed a prototype biosensor that detects levels of ATP and lactates in a patient’s blood, enabling rapid assessment of the severity of some medical conditions. The details were reported in the journal Biosensors and Bioelectronics.

ATP is a molecule found in every living cell that stores and carries energy. In red blood cells, ATP is produced by a biochemical pathway called the Embden–Meyerhof pathway. Severe illnesses such as multiple organ failure, sepsis and influenza reduce the amounts of ATP produced by red blood cells.

As such, the severity of these illnesses could be gauged by monitoring the amounts of ATP and lactates in a patient’s blood. “In 2013, our co-authors at Tokushima University proposed the ATP-lactate energy risk score (A-LES) for measuring ATP and lactate blood levels to assess acute influenza severity in patients,” explains Hokkaido University applied chemist, Akihiko Ishida. “However, current methods to measure these levels and other approaches for measuring disease severity can be cumbersome, lengthy or not sensitive enough. We wanted to develop a rapid, sensitive test to help doctors better triage their patients.” 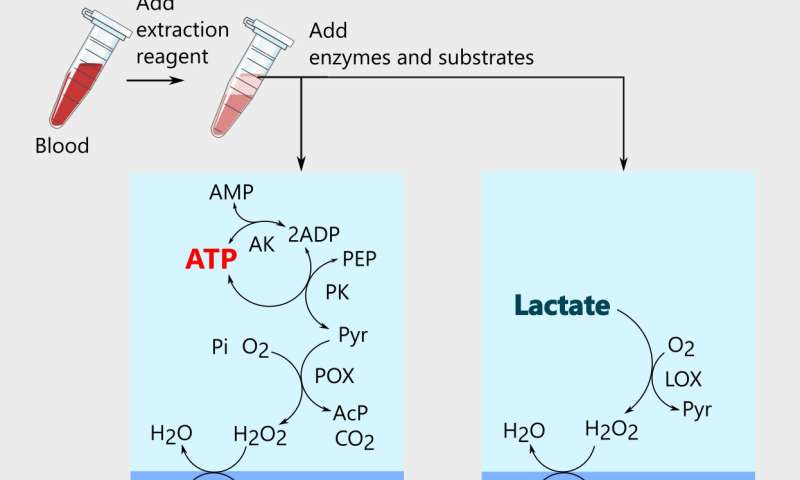 Ishida and colleagues at Hokkaido University and Tokushima University developed a biosensor that can detect levels of ATP and lactate in blood with great high sensitivity in as little as five minutes. The process is straightforward. Chemicals are added to a blood sample to extract ATP from red blood cells. Enzymes and substrates are then added to convert ATP and lactate to the same product that can be detected by specially modified electrodes on a sensor chip. The intensity of the current generated at the electrodes depends on the amount of by-product present in the sample.

The team conducted parallel tests and found that other components present in blood, such as ascorbic acid, pyruvic acid, adenosine diphosphate (ADP), urate and potassium ions, don’t interfere with the ability of the electrodes to accurately detect ATP and lactate. They also compared their sensor with those currently available and found it allowed for the relatively simple and rapid measurement of the two molecules.

“We hope our sensor will enable disease severity monitoring and serve as a tool for diagnosing and treating patients admitted to intensive care units,” says Ishida.