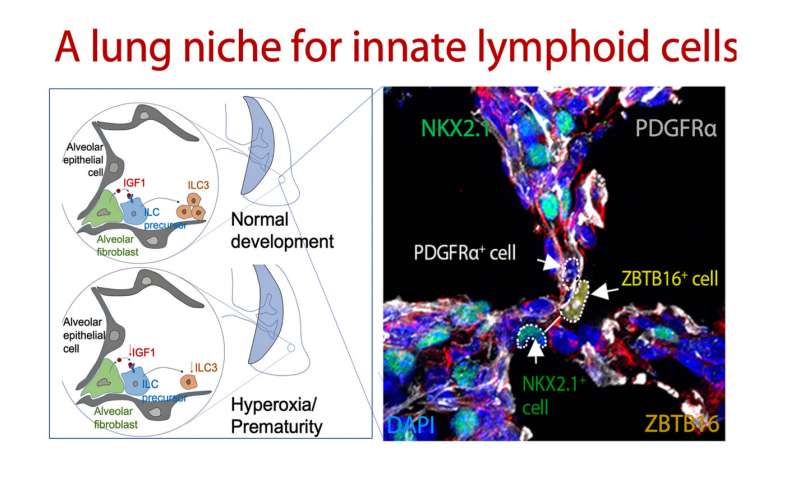 Deshmukh and his colleagues now plan pre-clinical studies in pre-term laboratory mouse pups to find out if they can harness their newly discovered biogenetic processes to stimulate production of Type 3 innate lymphoid cells in developing lungs. Their theory is that this will promote durable immune defenses in the mouse lungs against infection and tissue damaging inflammation.

The current study reveals a complex interplay between beneficial bacteria in the intestines, the maturation of lung tissues and the growth of immune cells in what the researchers call the gut-lung axis. It happens in neonates during an early and critical development window of the newborn lung, according to their report.

When researchers deleted pulmonary IGF1 in the lungs of baby mice, it interrupted the biogenic development of Type 3 innate lymphoid cells and made the mice susceptible to lung infections and pneumonia. They confirmed this by analyzing the underdeveloped lungs of premature mouse pups and donated lung tissues from the families of premature human infants.

The findings have potential clinical implications because premature infants are depleted of helpful gut bacteria by the need for oxygen ventilation to help them breath. This is exacerbated by what Deshmukh called a “double whammy” when the babies have to be administered antibiotics to fight their vulnerability to infection.

The preclinical study on mice to test potential therapies will include administering helpful gut bacteria and pulmonary IGF1 to see if this stimulates to development of a robust immune defense. Deshmukh said therapeutic administration of commensal bacteria and the IGF1 hormone are both being tested clinical in humans for other medical conditions.

Although medical science and technology continue to advance, premature birth and its complications remain a major challenge as the largest contributors to global infant death, according to the March of Dimes. In 2018, the most recent year statistically available, the preterm birth rate in the United States worsened for the fourth straight year, from 9.63 percent in 2015 to 10.02 percent in 2018.

Bacterial pneumonia kills more than one million infants around the world each year, study authors note.