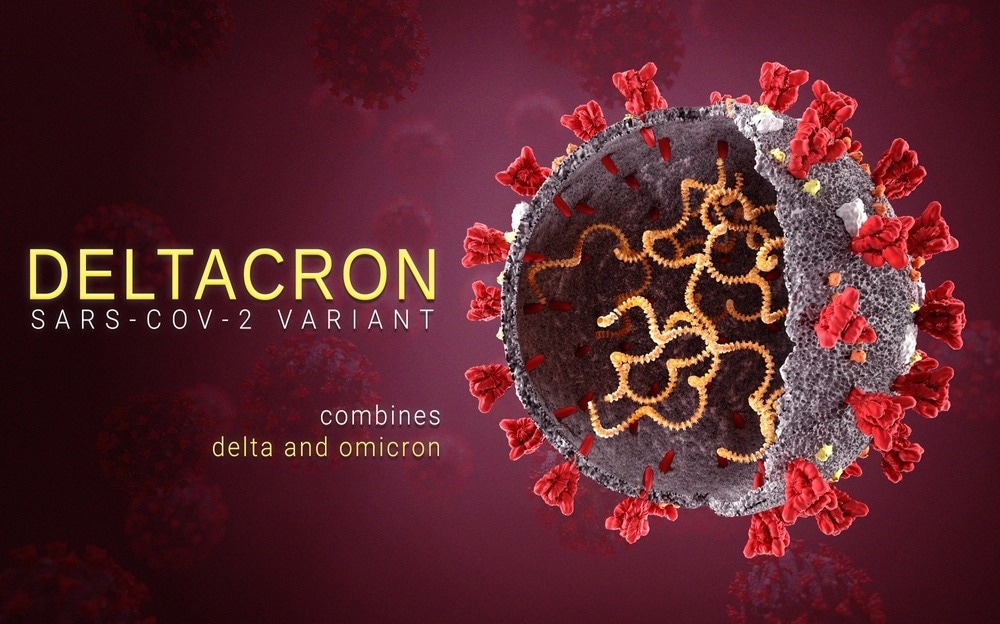 Coronaviruses are known to undergo recombination due to the replication of their ribonucleic acid (RNA) genome. Recombination can correct detrimental mutations in RNA viruses or alter their properties, such as increasing their transmissibility or reducing their sensitivity to antibody-mediated neutralization; therefore, SARS-CoV-2 recombination events must be closely monitored.

Three SARS-CoV-2 lineages were developed from the mutations, leading to higher transmissibility and enhanced neutralization resistance, as demonstrated by the emergence of the Alpha, Beta, and Gamma variants. These were referred to as the variants of concern (VOCs).

Recently several infections caused by a recombinant SARS-CoV-2 lineage containing genomic portions of the Delta and Omicron variants have been reported. Delta-Omicron or Deltacron was the tentative name of this recombinant strain, which was assigned the PANGO lineage XD.

Most of the XD genome is derived from the Delta sublineage AY.4. However, the spike (S) protein open reading frame has been replaced with a sequence matching the Omicron sublineage BA.1.

The SARS-CoV-2 S protein enables viral entry into host cells and is the primary target for neutralizing antibodies. The Omicron variant harbors over 30 mutations in the S protein, which alter cell tropism and the transmission potential of SARS-CoV-2 while significantly decreasing antibody-mediated neutralization.

The XD recombinant strain has raised concerns, as it may combine the Delta variant's increased pathogenicity with the Omicron VOC's high transmissibility and antibody evasion properties. Yet, neither the entry factor utilization nor its cell tropism has been studied, with the limited evidence available on the efficacy of neutralizing antibodies in blocking this pathway of the XD lineage.

The study tested S proteins from the recombinant SARS-CoV-2 XD lineage and the Delta and Omicron VOCs for their capacity to bind with the angiotensin-converting enzyme-2 (ACE-2) receptor to promote virus-cell and cell-cell fusion, as well as resistance to antibody-mediated neutralization.

The study also assessed the biological similarities between XD and Omicron host cell entry and antibodies' inhibition of this process. To this end, the researchers used vesicular stomatitis pseudovirus particles containing the corresponding S protein as a surrogate system for researching SARS-CoV-2 host cell entrance and neutralization.

Soluble human ACE2-Fc constructs and flow cytometry were used to determine the ability of XD S protein to bind ACE2. S protein-coding expression plasmids were transfected into 293T cells plated in six-well plates. Empty plasmid-transfected cells were used as a control. Following transfection, the cells were examined by flow cytometry.

Next, the S protein-driven cell-cell fusion that contributes to COVID-19 pathogenesis was analyzed. To examine S protein cleavage and particle inclusion, the researchers evaluated the cleavage efficiency of pseudovirus-incorporated S proteins using immunoblotting. Finally, quantifying virus-encoded firefly luciferase activity in cell lysates was utilized to determine the efficacy of transduction.

In addition, the susceptibility of particles carrying XD-S to neutralization by antibodies induced by vaccination with two or three doses of the Pfizer-BioNTech BNT162b2 messenger ribonucleic acid (mRNA) vaccine and breakthrough infection incidences in vaccinated individuals during the Delta or early Omicron waves in Germany were evaluated.

The Delta S induced significant cell-cell fusion compared to the expression of the Omicron S. A reduction in cell-to-cell fusion was observed by XD S relative to Delta S. In contrast, a slight increase was documented in comparison to the Omicron S.

After three doses of the BNT162b2/Comirnaty vaccine (BNT/BNT/BNT), plasma exhibited improved neutralizing activity and efficiently neutralized all particles. Neutralization was highest for Deltapp and only marginally but comparably lower for BA.1pp or XDpp with about a 2.7-fold reduction. 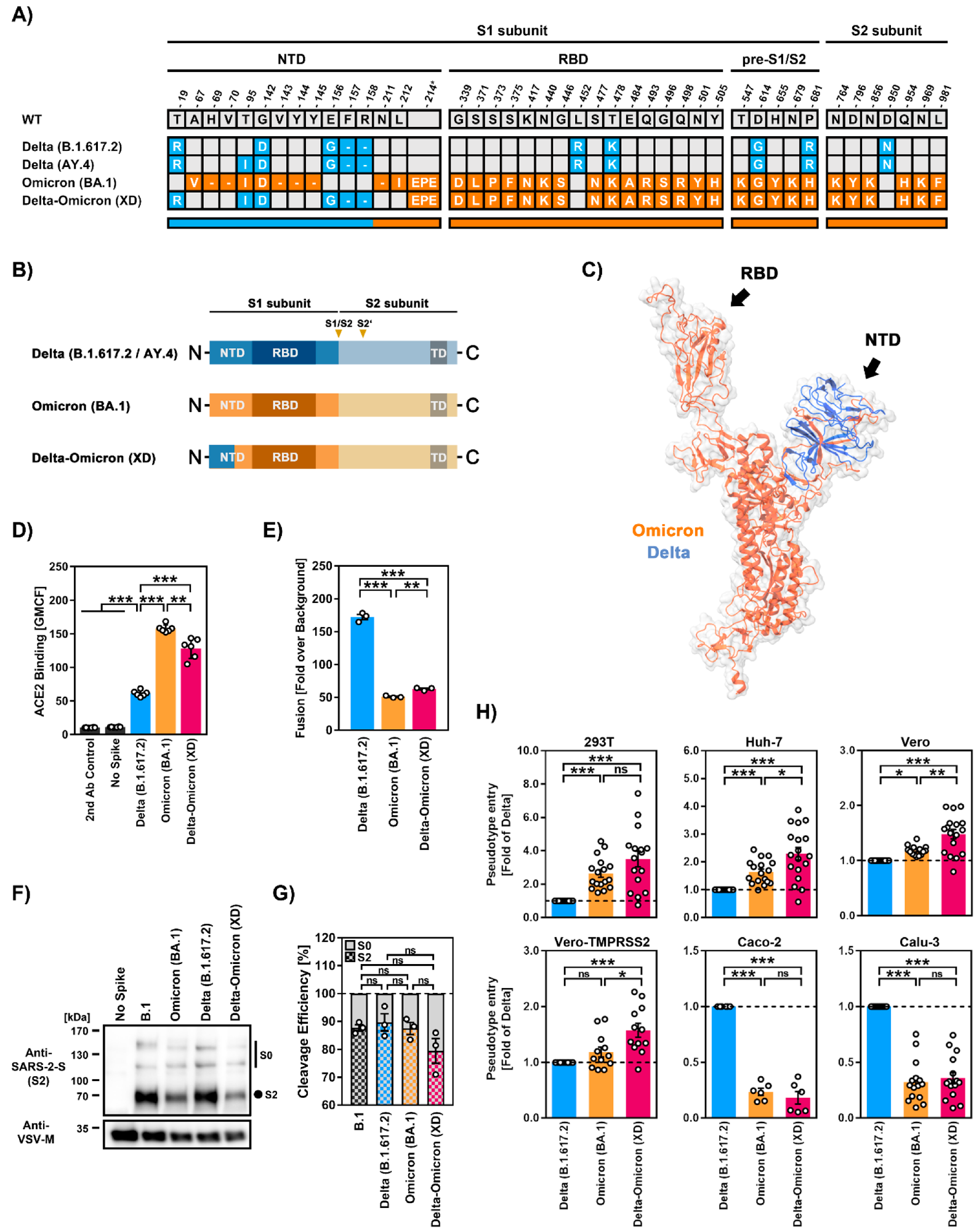 Compilation of the top interviews, articles, and news in the last year.
Download a copy today

Several important biological characteristics are shared between the SARS-CoV-2 recombinant XD lineage S proteins and that of the Omicron variant, including their equivalent ACE2 binding, cell-cell fusion, and sensitivity to antibody neutralization.

There is high sequence identity between XD and BA.1 S proteins, with only the first half of the N-terminal domain (NTD) originating from Delta S and the remainder from BA.1 S. There are also subtle differences in ACE2 binding that are slightly lower for XD S and cell-line tropism that is somewhat higher Huh-7, Vero, and Vero-TMPRSS2 cell entry for particles bearing Delta-Omicron

XD cell entry and blockage by antibodies are very similar to that for BA.1. Therefore, it is reasonable to conclude that BA.1 and XD target similar cells and tissues in infected patients and that XD has a reduced capacity to expand in the alveolar space and potentially cause severe disease.

The use of vaccines that establish broad-span immunity against multiple SARS-CoV-2 lineages is among the most effective strategies for preventing recombination between lineages of SARS-CoV-2. In addition, there is evidence that multivalent vaccines, such as those recently approved by Moderna and BioNTech/Pfizer, include both S proteins of the B.1 and BA.5 lines of SARS-CoV-2, increase neutralization breadth and reduce recombination risks.

I am a medical content writer and editor. My interests lie in public health awareness and medical communication. I have worked as a clinical dentist and as a consultant research writer in an Indian medical publishing house. It is my constant endeavor is to update knowledge on newer treatment modalities relating to various medical fields. I have also aided in proofreading and publication of manuscripts in accredited medical journals. I like to sketch, read and listen to music in my leisure time.