Revealed: ONE cookie can contain 10 TEASPOONS of sugar – more than a can of Coca Cola… so how bad is YOUR favourite sweet treat?

Action on Sugar’s analysis shows a single cookie bought at Aldi can contain up to 10 teaspoons of sugar — more than a can of Coca Cola.

Brownies sold at Caffe Nero are packed full of eight teaspoons of sugar, while doughnuts made by confectionary giant Krispy Kreme can contain three.

The campaign group argued products ‘can be made with far less sugar’ because alternatives from other retailers contained as little as a quarter of the amount.

It called on ministers to enforce sugar quotas on food manufacturers if it is ‘serious about improving our health’.

Britons are advised to eat no more than 30g of added sugar (approximately seven sugar cubes) each day. Eating too much can lead to weight gain and tooth decay and is a key driver of rising obesity levels.

If Britons reduced their sugar intake to the recommended amount, the NHS would save £500million every year, while 4,100 premature deaths would be prevented, along with 200,000 cases of tooth decay, the researchers said. 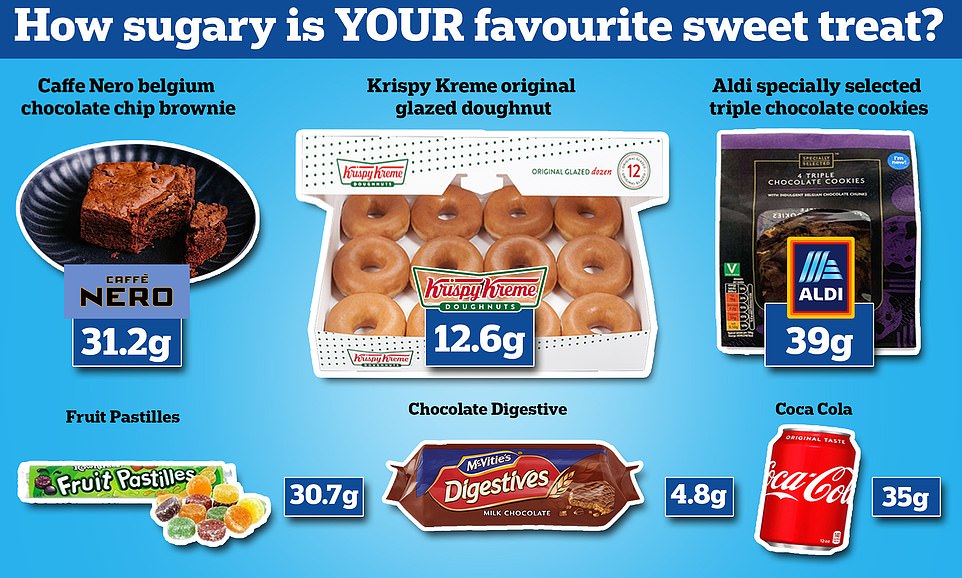 Action on Sugar, a team of researchers based at Queen Mary University of London, and Obesity Health Alliance analysed the sugar content in popular sweet snacks.

Aldi’s specially selected triple chocolate cookie contained 39g of sugar, equivalent to 10 teaspoons, per serving — making the product 50 per cent sugar. The figure is more than a can of Coca Cola (35g) and equivalent to 12 custard cream biscuits (3.3g per biscuit).

HOW MUCH SUGAR SHOULD I EAT?

Eating too much sugar can lead to weight gain and tooth decay.

The type of sugars most adults and children in the UK eat too much of are “free sugars”, which includes any added to food and drink and sugars in honey, syrup and fruit juice.

But sugar found naturally in milk, fruit and vegetables do not count as free sugars.

Adults are not supposed to have more than 30g of free sugars a day – around seven sugar cubes.

Children aged seven to 10 should have no more than 24g of free sugars (six sugar cubes), while those aged four to six should not have more than 19g (five sugar cubs).

Eating too much sugar can mean consuming too many calories, leading to weight gain.

Being overweight increases the risk of suffering heart disease, type 2 diabetes and some cancers.

Sugar is also one of the main causes of tooth decay.

Health chiefs advise Britons to have no more than a 150ml glass of fruit juice and smoothies per day and limit the amount of foods with high levels of free sugars.

And Caffe Nero’s Belgian chocolate chip brownie has 31.2g of sugar (8 teaspoons) — more than a packet of fruit pastilles, which contain 30.7g of sugar.

And there was ‘no uniformity and limited access’ to nutrition information or front of pack labelling for on-the-go products.

But despite overall ‘shockingly high’ sugar levels, it does vary across the same product type, showing the products ‘can be made with far less sugar and sold in smaller portion sizes’.

And Greggs glazed ring doughnut had one teaspoon of sugar — a third of the amount in Krispy Kreme’s equivalent product, ‘showing that this high level of sugar is unnecessary’, the team said.

Katharine Jenner, director and registered nutritionist at Action on Sugar said the findings show a lack of progress on curtailing the amount of sugar in the food we eat, which is ‘being deliberately kept away from public scrutiny’.

She said: ‘It is clear from our product survey that a voluntary approach to reformulation is not working with most retailers and coffee shops failing to make any significant reductions.

‘These sugary products are enticingly placed near the tills and end of aisles for adults and children to grab “on the go” with their daily coffee or sandwich, encouraging over consumption.’

Holly Gabriel, nutrition manager and registered nutritionist at Action on Sugar, said the excess of sugar being imported and produced in the UK, sold at low cost, is ‘undoubtedly contributing’ to a lack of progress on cutting sugar from recipes.

She said: ‘Measures such as the Soft Drinks Industry Levy, which has seen a 35 per cent reduction in sugar within just four years, demonstrates the power of Government to help reduce population sugar intakes and lower risk of associated health implications.’

Caroline Cerny, alliance lead at Obesity Health Alliance, said their findings show the food industry can ‘play a vital role in helping people reduce their sugar consumption – but not all companies are prepared to step up and play their part by reformulating their products’.

• 30 grams of fibre a day: This is the same as eating all of the following: 5 portions of fruit and vegetables, 2 whole-wheat cereal biscuits, 2 thick slices of wholemeal bread and large baked potato with the skin on

• Eat some beans, pulses, fish, eggs, meat and other proteins (including 2 portions of fish every week, one of which should be oily)

She said the Government ‘needs to step in with new regulation that creates a level playing field and financially disincentivises companies from producing and marketing sugary products’.

‘If the Government is serious about improving our health, it needs to act now, she added.

More than a third of adults in England are overweight and more than a quarter are obese, official figures show.

And one in seven youngsters are obese by the time they start reception, compared to one in 10 before Covid struck.

And by the time they are in Year 6, the proportion who are obese jumps to one in four, up from one in five in 2019.

Both Action on Sugar and Obesity Health Alliance this week signed a letter to Health Secretary Sajid Javid, calling for the publication of the final sugar reduction progress report, which is due to set out a plan for tackling the obesity crisis.

They also called on ministers to use an upcoming white paper on health disparities to set out ‘stringent steps’ for sugar reduction.

Disincentivising food manufacturers from making sugary food is key, so a levy imposed on soft drinks in 2018, which charges companies up to 24 pence per litre of drink, should be extended to food categories. Alternatively, a new duty could be imposed on sugar that is bought by manufacturers, they said.

The Prime Minister announced a crackdown on obesity in 2020 after a near-fatal bout of Covid which he attributed to being overweight.

More than a third of adults in England are overweight and more than a quarter are obese, official figures show.

As part of the plan, new laws restricting offers on foods high in fat, sugar and salt are due to come into effect in medium and large shops in October. Junk food giants will also be banned from advertising online and before 9pm on TV by January 2023.

No10 is also planning to end ‘buy one, get one free’ promotions for unhealthy food and stop the products from being placed in prominent locations in shops, such as entrances and checkouts.

Restaurants, cafes and takeaways will be required to list the calories on their menus from Wednesday.

And through the NHS, Britons can now get access to apps as well as free or discounted membership to gyms and programmes such as Weight Watchers to help them shed weight.

But there are concerns Mr Johnson may dilute or drop some of these plans to appease Tory MPs who oppose nanny-state interventions.