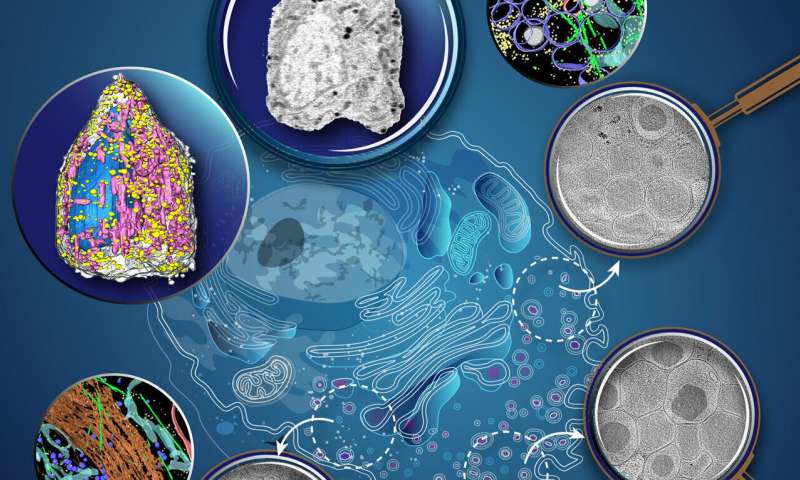 For the first time, scientists have peered deeply inside a pancreatic cell and observed it packaging insulin and responding to a drug treatment, an intimate look at the mechanisms responsible for preventing diabetes.

A team of scientists—led by researchers at the Bridge Institute at the USC Michelson Center for Convergent Bioscience—have developed advanced imaging techniques to achieve the most detailed, multidimensional look ever inside pancreatic beta cells, the insulin factories of the body. They witnessed a choreography of reactions, some expected and others surprising, as the cell responded to changes.

Their work marks a new way to understand a disease that claims about 85,000 American lives annually. When applied to cells, these imaging breakthroughs are roughly akin to witnessing galaxies when astronomers gained advanced telescopes or germs when biologists got microscopes. Other techniques, often based on indirect measurement, tell part of the cell’s story, but the new direct and detailed observations provide a more complete picture.

“We can understand things much better when we have both biochemical data and pictures so we can see exactly what’s going on inside the pancreatic beta cell. This gives us a whole new insight, and you always need fresh perspectives to look at a problem to find new solutions,” said Kate White, lead author of the research, USC assistant professor of molecular and computational biology and director of the Pancreatic Beta Cell Consortium at the Bridge Institute.

The contributors to developing the new imaging methods include researchers from USC, Caltech, UCLA, the University of California, San Francisco (UCSF), Lawrence Berkeley National Laboratory in California and the iHuman Institute at ShanghaiTech University in China. This group is working with the consortium’s effort to map the pancreatic cell and all of its functions and components—down to the atom—and represents one of the first large-scale, multidisciplinary endeavors led by the Bridge Institute’s scientists and engineers, many of whom are housed at the USC Michelson Center for Convergent Bioscience.

The findings appear in a pair of studies published today in Science Advances.

The researchers emphasize that the findings are not a cure for diabetes—science has a long way to go to achieve that goal. And the research was conducted using a rodent cell line model system. That said, the studies do provide new ways to study the cell to understand how drugs work, gains that can advance new treatments—possibly including stem cells to manufacture entire pancreases.

For the Bridge Institute, which has made the pancreatic beta cell project its research focus, the studies are a milestone. The project avails scientific crowdsourcing to gather data and ideas from scientists around the world who are working together to cure diabetes. The mission of the Bridge Institute involves an array of experts in biology, chemistry, computational biology, engineering, medicine, mathematics and imaging. The consortium also involves USC artists and filmmakers who can convey visual interpretations of the research.

The two studies take complementary approaches to envision the pancreatic beta cell in new ways, each using cells from rats.

One paper employs soft X-ray tomography (SXT), which uses penetrating X-rays to achieve images of whole cells, similar to CT scans or ultrasounds. While the technology is commonly used in medical exams, archeology, oceanography and other sciences, it’s only recently been applied to mapping cells. The lead and corresponding authors of that paper are, respectively, White and Ray Stevens, the Provost Professor of Biological Sciences and Chemistry at the USC Dornsife College of Letters, Arts and Sciences and the co-director of the Bridge Institute, as well as UCSF professors Andrej Sali and Carolyn Larabell.

The second paper uses cryo-electron tomography (CET). It’s a technology better equipped to look at the smaller components within the cell such as organelles and proteins. Xianjun Zhang, a postdoctoral scholar at the Bridge Institute, is the lead author of that paper; Stevens and Grant Jensen of Caltech are corresponding authors.

Combining the methods, the scientists had a high-resolution view of the whole cell and its parts after they exposed it to glucose and a diabetes drug. The SXT technology provided a view of the whole cell, its outer membrane, nucleus, insulin vesicles, lipid droplets and mitochondria. The CET images zeroed in on small interior parts along the insulin secretion pathway: microtubules, mitochondria and endoplasmic reticulum, which move stuff around the cell like little trucks as well as help create insulin vesicles.

Next, researchers stimulated the cell with different substances, including low sugar doses, high sugar doses and a common type 2 diabetes drug, exendin-4. Then, they watched what happened after 5 minutes and 30 minutes. They used potassium chloride salt solution as a control.

As expected, the pancreatic beta cell responded to the glucose by making vesicles, which are essentially little insulin packets. In the first 5 minutes, only a few vesicles—each densely packed with the hormone—appeared. After 30 minutes, the cell produced more in response to the glucose and sent them to the surface membrane. The sequence is not new—it’s a common function of the cell—but it’s never been watched in detail in a time sequence before.

When the cell was exposed to exendin-4, it underwent dramatic change. After exendin-4 reached the pancreatic beta cell, the entire cell rapidly accelerated insulin output.

“It turbocharged the cell to make it more efficient, and you could watch how it worked,” White said. “It was almost like watching tangled traffic on L.A. freeways suddenly unsnarl and move with rapid efficiency.”

Specifically, the mitochondria increased in volume and lots of the vesicle packets appeared around it, aided by the endoplasmic reticulum, though the scientists aren’t sure of the mechanism. As the packets multiplied rapidly, they filled with insulin and began to move toward the cell surface for release to the bloodstream. Along the way, something extraordinary happened: the packets grew more numerous and larger, accumulating mature insulin like balloons rising and inflating. They floated upward to the cell membrane, where they spread out farther and wider across the cell’s interior.

The observations show exactly how the cell responded to a diabetes drug. The new imaging technology also opens the possibility for developing even better drugs to precisely target the disease and reduce side effects.

There were also some surprises. With CET imaging, scientists saw that, during insulin production, some mitochondria—often called the powerhouse of the cell—behave differently depending on their metal or calcium content, as well as what neighborhood of the cell they inhabit.

The imaging technologies used in these two studies have broader applications. Similar approaches can be used for studying other types of cells that secrete hormones, as well as changes that occur during stem cell differentiation.

“The next generation of understanding the structure of life is to converge and integrate the data we have between molecular and cellular levels,” Stevens said. “These two papers are major steps forward in our quest to bridge such data at different scales to better understand disease and develop therapeutics, in this specific case for pancreatic beta cells and diabetes.”