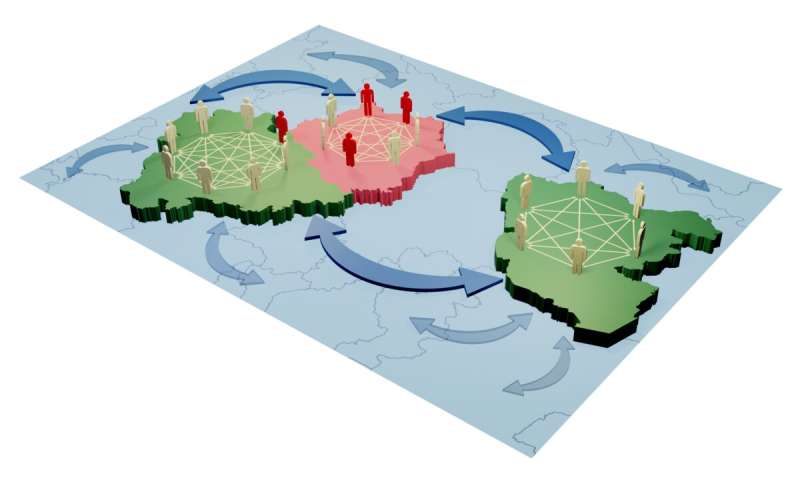 A team of scientists at the Max Planck Institute for Dynamics and Self-Organization in Göttingen has simulated possible courses of the corona pandemic. The calculations show that regional measures can keep the epidemic under control with substantially fewer restrictions than nationally imposed lockdowns if the number of cross-regional infections is low enough. However, regional thresholds for local restrictions should be lower than those currently agreed upon in, e.g., Germany. Even if these lower thresholds lead to more frequent regional lockdowns, the long-term benefits of the strategy would outweigh the local measures triggered by them.

A uniform framework for triggering measures can ensure a swift response to rising infection numbers in individual regions. The number of cross-regional infections should be monitored by contact tracing and, if necessary, be reduced. In addition, the researchers recommend an expansion of testing even before threshold values are reached.

In many countries, the first wave of the SARS-CoV-2 epidemic was controlled successfully with severe restrictions on public and private life—so-called lockdowns. These included nationwide contact bans, travel restrictions and the closing of shops and schools. Instead of such drastic restrictions, many countries are now turning to more fine-grained approaches that consist of regionally and temporally limited measures.

Ramin Golestanian, director of the Department “Living Matter Physics” at the Max Planck Institute for Dynamics and Self-Organization, Philip Bittihn and their team developed a model that describes two different types of contacts: those within individual regions (e.g., counties) and those with the rest of the population beyond regional boundaries. The proportion of cross-regional contacts determines the so-called “leakiness,” i.e. how easily infections can spread between regions. In the model, individual regions impose local contact restrictions if they exceed a certain number of infections, similar to the regional strategy currently being pursued in Germany.

To determine how severely the population would be affected by the local lockdowns, they measured how long the average citizen in the simulation experienced restrictions. They were then able to compare this ‘restriction time’ with results for an otherwise identical national strategy.

The study includes simulations for Germany, England, Italy, New York State and Florida over the course of the next five years. It takes into account current infection numbers, the individual regional structure of each country and the respective lockdown efficiency in the past. However, the observed effects are universal and occur in many non-equilibrium systems exhibiting dynamics determined by individual, not fully predictable events. Special emphasis in the simulation was therefore placed on the role of individual infection events: While, at the peak of the first wave of the epidemic the dynamics could largely be tracked with simple models for an entire country, in reality, disease spreading is a discrete process with individual infection events subject to inherent random fluctuations. If the numbers infections in individual regions are very low, the special effects in this so-called “small-number regime” must be taken into account, as the team had already found in a previous study. 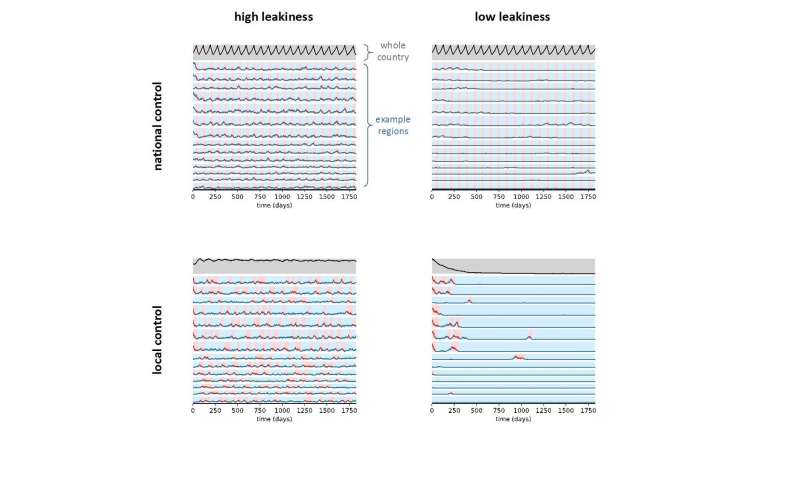 Proportion of cross-regional infections is a crucial parameter

In the context of a local containment strategy, cross-regional infections should therefore be given special attention. Reducing them below the level at which the restriction time decreases abruptly does not necessarily require restrictions in mobility. Instead, one could identify groups of people with a particular risk of spreading the disease and provide them with better protective equipment. “The problem is that we do not currently have a good quantitative idea about the role of cross-regional infections. However, given the the current low infection numbers, this information could be obtained through effective contact tracing. With these data at hand, it would be much more effective to discuss concrete measures to reduce cross-regional infections, should the need arise. In this case, freedom within individual regions would not be restricted. On the contrary—many future restrictions would be prevented,” says Philip Bittihn.

The simulations show that a threshold for triggering local restrictions of about ten infections per 100,000 inhabitants within seven days is successful. This value is lower than the 50 infections per 100,000 inhabitants currently considered in Germany. “Of course, such strict control with low thresholds could initially lead to more lockdowns. In the long term, however, the total duration of the restrictions would be lower. To implement such low thresholds, extensive testing should be carried out to ensure that the number of undetected cases is low,” says Ramin Golestanian.

Compared to other countries, Germany could more easily benefit from a local containment strategy and keep the total restriction time short. “Countries with smaller regions can use existing administrative levels like the county structure to develop and implement local containment strategies that exploit the effects we find in our study. This is because, in regions with smaller populations, there is a higher probability to completely eradicate the disease. States with a large number of very densely populated regions, on the other hand, could compensate for their negative effects by dividing them into smaller units, if possible, or by setting stricter thresholds for the initiation of local lockdowns,” explains Bittihn.