A quarter of all 15-year-olds have a reading age of twelve or below which puts them at a ‘disadvantage’ in their GCSEs, new research shows.

They will struggle to understand questions in English language and even subjects such as science and maths, which have become increasingly ‘text heavy’.

The findings will renew concern about the levels of literacy in the country’s primary and secondary schools amid a decline in reading for pleasure.

Researchers compared their scores in the company’s standardised reading test – which schools voluntarily adopt – to their GCSE results in 2018/19. 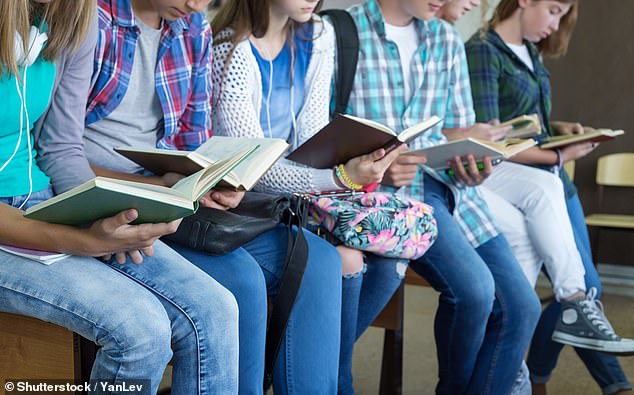 There is also a gender gap in literacy skills. Fifty-three per cent of 15-year-old girls have the expected or ‘higher’ reading ability for their age, compared to only 47 per cent for boys.

The GL Assessment report points out that schools which introduce GCSE curriculums early are likely to ‘encounter difficulties’. This is because ‘four in five students will lack the reading ability to readily access them’.

The report says: ‘Given the importance of literacy to the whole school curriculum, it follows that those students who struggle with it are at a significant disadvantage – a sizeable minority are years behind their peers at 15.’

Illiterate people may be up to three times more likely to develop dementia, a study suggests.

Researchers from Columbia University in New York looked at nearly 1,000 people in their late 70s over a four-year period.

They found the risk of the memory-robbing disorder tripled in those who were never taught how to read or write.

Being literate allows people to engage in activities that stimulate the brain, such as reading newspapers and helping grandchildren with homework.

Around 7million Britons never learn how to read or write, according to the National Literacy Trust.

In the US, there are roughly 32million illiterate people, according to the Department of Education.

The cause of dementia remains unknown – but evidence is quickly mounting that keeping the brain stimulated fends it off.

And learning new things, as well as social interaction, build up cognitive reserve – the mind’s resistance to damage of the brain.

The study also found that a good grasp of literacy is more important for maths than humanity subjects such as English literature and history.

This is because pupils need to understand the ‘language of mathematics’. They can quickly lose confidence when faced with words they thought they knew, for example ‘difference’, ‘prime’ or ‘product’ that mean something else in a mathematical context.

Maths GCSE can also be ‘especially challenging’ as students need to read and comprehend a passage of text, identify the question being asked and then solve a numerical problem.

The report says: ‘Our study showed that there is a significant correlation between reading ability and GCSE results across all subjects.

‘This was not just the case in English, but in maths and science too. Indeed, the correlation between good literacy and good student outcomes at GCSE was higher in maths than in some arts subjects like history and English literature.’

Researchers say the ‘correlations in maths and the sciences also underscore just how ‘text heavy’ most academic subjects are and why literacy is so crucial’.

New ‘more demanding’ GCSEs were introduced by the government in 2017. Exams now tend to include ‘wordier’ questions which ‘will prove problematic for a significant minority of students with a low reading age’.

Crispin Chatterton, director of education at GL Assessment, said: ‘Our analysis makes clear how important it is for children to be good readers.

Alex Quigley, national content manager at the Education Endowment Foundation, said many secondary school teachers and leaders are ‘undertrained’ and ‘too busy’ to help pupils ‘access the demands of the academic curriculum’.

He said: ‘Literacy is too often seen as a bolt-on extra for teachers of science, geography and PE.

‘Yet, when you dig into the research evidence, it is revealed that being literate is the most essential factor for disadvantaged students studying science. Reading, writing, vocabulary and talk all mediate the school curriculum.’