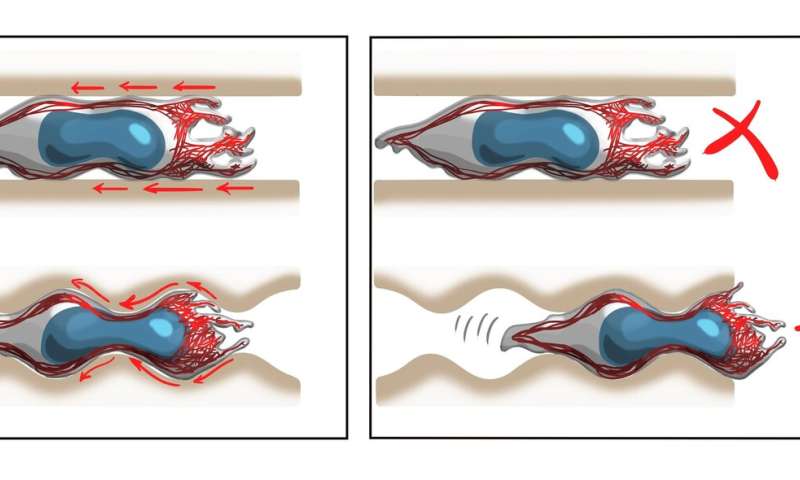 Leukocytes instantly move out of your blood vessels to the site of inflammation after an injury. Similarly, cancer cells, which can originate in any tissue or organ, can also spread and reproduce far away from their place of origin. The result: a metastasis.

Usually, every cell within the organism binds to its surroundings via specific adhesion receptors that are present on its plasma membrane. As universal “glue” between cells and their surroundings, these adhesion receptors, or integrins, either stabilize a cell if it needs to remain immobile, or serve as anchors when the cell climbs through the tissue. But how can certain types of cells such as white blood cells flexibly crawl through different tissues, even though these tissues are composed of very distinct molecules that do not necessarily match the adhesion receptors?

Moving with and without a “glue”

The mystery has been solved in a recent study reported in Nature by the group of Michael Sixt at the Institute of Science and Technology Austria (IST Austria) and collaborators from France. Combining experiments with physical models, the scientists describe a new mechanism of cell locomotion that that does not require binding to the extracellular environment. Instead, the cells use the geometry of the environment to propel themselves.

In their experiments, the biologists used different types of leukocytes from which they genetically eliminated the function of integrins to interrupt the binding between the cells and their extracellular environment. While integrins are essential for the survival and movement of almost all cell types, the IST Austria scientists had discovered in a previous study that leukocytes can move and survive without integrins. The same turned out to be true for some cancer cells.

To analyze the locomotion mechanism that allows cells to migrate in the absence of adhesion, the scientists focused on the geometry of the environment rather than its molecular composition. They engineered tiny cell-sized “microfluidic” channels with different wall geometries: from completely smooth to rough or serrated in texture. They then let the cells migrate through these channels to observe that the integrin-deprived cells were not able to move forward when the walls were smooth and parallel.

“The cells were ‘running on the spot’—just like a car tire would spin on icy grounds,” says Anne Reversat, first author of the study and former IST Austria postdoc, who is now doing research at the University of Liverpool. “However, when the walls were textured with bumps, the cells could efficiently migrate without integrins. Cells that still carried their integrins could equally migrate in both rough textured and smooth channels.”

The right grip to go everywhere

By looking closer experimentally and theoretically at the biomechanics of such “off-road” cell movement, Reversat et al. uncovered the unifying mechanical theme that underlies both modes of locomotion: Actin, the filamentous building material of the cell’s cytoskeleton, flows from the front of the cell to the tail end. This retrograde actin flow is the force within the cell that, once coupled to the environment, drives the cell body forward. Force-coupling can happen via integrins that penetrate the plasma membrane and thereby connect the intracellular actin with the extracellular substrate.