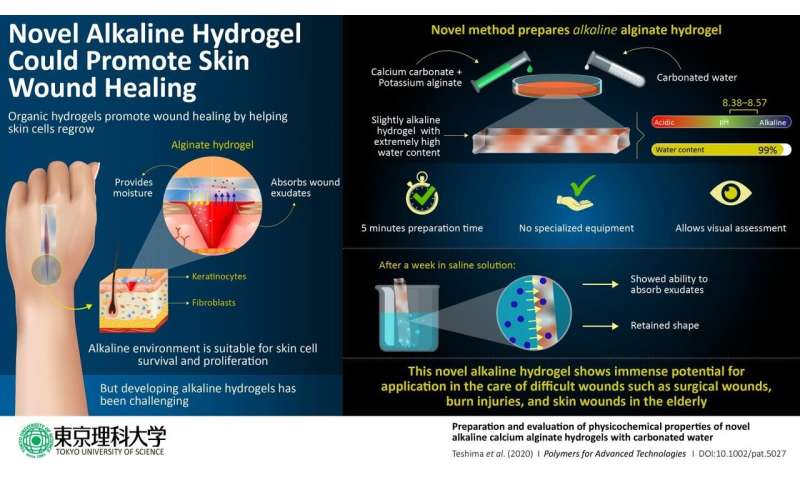 With an increase in the elderly and aging population and also in the number of invasive surgeries, wound healing has become a critical focus area in medicine. The complex bodily processes involved in wound healing make it challenging as well as rewarding to identify newer methods and materials for effective wound healing. Now, in a new study, published in Polymers for Advanced Technologies, led by undergraduate student (yes, you read that right) Ryota Teshima, researchers from Tokyo University of Science, Japan, have developed a groundbreaking novel material with possible applications in wound healing. But exactly why is this new material so exciting?

It is important to create an optimal physiological environment around a wound to promote the growth of new cells. Recent research has revealed that a type of material called a hydrogel is exceptionally useful for achieving such conditions given its molecular structure. Hydrogels are three-dimensionally cross-linked networks of polymers that can absorb more than 95% of their volume in water. Hydrogels with natural polymers have excellent compatibility with the biological conditions of our skin and tissues (referred to as biocompatibility), can absorb fluids from the wound, and continuously provide moisture into the wound, creating a highly suitable environment for the wound to heal.

One such natural polymer that is used in hydrogels for wound dressing is alginate, a carbohydrate derived from seaweed, and therefore, abundantly available. Alginate gels are very easy to prepare, but gelation occurs quickly, making it difficult to control the gelation time. Although methods to achieve this control have previously been reported, ensuring short gelation time while maintaining transparency results in hydrogels with a slightly acidic (4-6) or neutral pH. Slightly acidic conditions were, until recently, believed to be beneficial for wound healing, but newer research has found that a slightly alkaline pH (8-8.5) is better for promoting the growth of skin healing cells such as fibroblasts and keratinocytes.

This is the context that shaped the characteristics of the next level alginate hydrogel production method that Mr. Teshima and his team developed. He summarizes their breakthrough: “We have succeeded in preparing a novel alkaline alginate hydrogel (pH 8.38-8.57) suitable for wound healing via a method that requires no special equipment and can be carried out at room temperature. This, in addition to the fact that the hydrogel forms in 5 minutes, makes it ideal for potential use in any medical practice anywhere for superior wound healing.”

Their method involves mixing calcium carbonate and potassium alginate, and then adding carbonated water to this mixture and letting the gelation (gel formation) process take place. In this method, the pH of the gel shifts to alkaline because the carbon dioxide volatilizes after gelation. This also ensures transparency of the gel, which in turn allows the visual assessment of wounds and helps in easily ascertaining the progress of healing. Also, regardless of the amounts of ingredients used, the resultant hydrogels have extremely high water content—up to 99%.

When the team placed their hydrogel in physiological saline solution, it passed the test for another critical requisite for a wound dressing: the potential to absorb exudates from the wound. And while the hydrogel did become structurally weak and could not be lifted with tweezers after a week of immersion, it retained its shape.

Speaking about the motivation behind this exciting study, Mr. Teshima says, “I have been experimenting with alginate gels ever since junior high school. There was also increasing interest in regenerative medicine when I was growing up, which compelled me to focus on the creation of useful biocompatible materials that can be used in medical therapy.” Well, there’s no denying that this novel hydrogel developed by Mr. Teshima’s team shows immense potential for near-future application to wound healing in medicine.

Hopeful of even more potential applications of their method in medicine beyond wound healing, Mr. Teshima says, “In the future, if it is possible to control the sustained release of an effective drug held inside it, this novel hydrogel can be used as a drug carrier as well.”