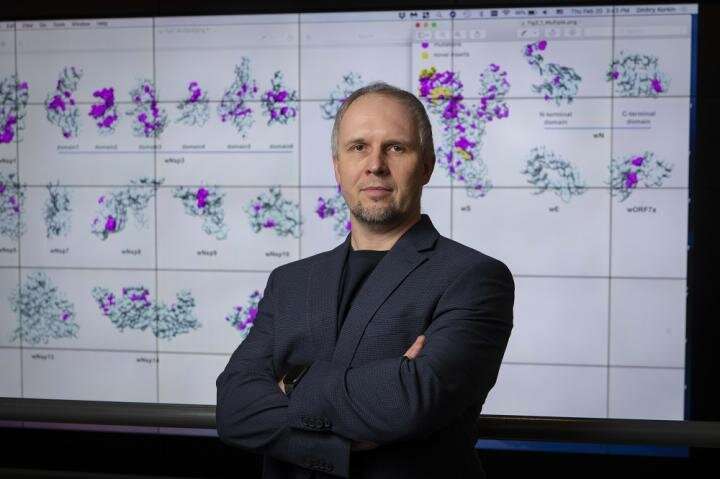 Two months after creating a structural 3-D roadmap of the novel coronavirus and sharing it with the scientific community worldwide, Worcester Polytechnic Institute (WPI) bioinformatics researcher Dmitry Korkin has published a paper on the topic in Viruses, a leading virology journal.

In the peer-reviewed paper, Korkin, associate professor of computer science at WPI and director of the university’s bioinformatics and computational biology program, describes how he and his research team of graduate students used bioinformatics and molecular modeling to reconstruct the 3-D structure of major viral proteins and their interactions with human proteins.

Specifically, the team found three Severe Acute Respiratory Syndrome (SARS) isolates—or specimens—that were similar to COVID-19, a new disease caused by a novel coronavirus that has not been seen before in humans. SARS, a virus identified in 2003, also caused worldwide infection and a significant number of deaths.

Korkin and his team reached three preliminary conclusions that could play a part in modeling the virus and aiding scientists with future drug discovery. First they determined that changes in the proteins constituting the novel coronavirus were not distributed evenly, but often formed clusters on the protein surfaces when compared to human SARS virus and the other related animal viruses.

Second, his group showed that the region of “spike protein,” a protein on the surface of the new virus that would be targeted by human antibodies, is very different from the same region in SARS, suggesting that the existing SARS vaccine might not be efficient and a new vaccine is required.

At the same time, a third conclusion the team made is that the regions targeted by the previously developed SARS antiviral drug candidates were remarkably intact, suggesting that repurposing of those drugs is possible.

“The goal of this computational work is twofold,” Korkin wrote in Viruses, an open access journal published monthly online. He said he wanted to “…make the structural road map and the related findings fully available to the research community” and “…help experimental scientists in their deciphering of the molecular mechanisms implicated in infection by the new coronavirus as well as in vaccine development and antiviral drug discovery.”

In the United States, the Centers for Disease Control and Prevention reported nearly 580,000 cases and more than 22,000 deaths of COVID-19 by mid-April. According to the World Health Organization, the number of cases has reached into the millions, resulting in more than 100,000 deaths globally.

In February, Korkin and his research team created and unveiled a structural 3-D roadmap of the new Coronavirus. At that time, Korkin shared the roadmap with researchers worldwide in an effort to spur greater research about the disease.

To get the findings out quickly to the research community, Korkin’s complete 3-D structural roadmap dataset and a manuscript preprint was posted on Feb. 14 on bioRxiv, a free online archive and distribution service for unpublished preprints in the life sciences operated by Cold Spring Harbor Laboratory, a not-for-profit research and educational institution.

Korkin is pleased with the publication in Viruses, noting that it validates his earlier work.

“The publication in Viruses strengthens our hopes that the work our team has developed over the past three months will add significant value to the research community in the joint effort to fight the disease,” said Korkin. “We are very pleased that our work has been formally reviewed and is available to anyone as an open-access publication.”