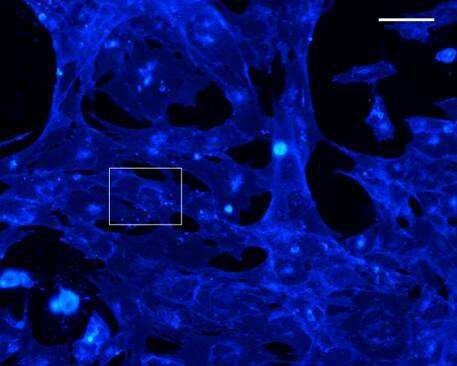 A study led by the Institut de Neurociències (INc-UAB) shows that APOE4, the principal genetic risk factor for the most common type of Alzheimer’s disease, produces an alteration in the astrocytes’ signaling mechanisms in male mice, which could be key for the development of this pathology. In females, however, this alteration occurs in different variants of APOE. The study advances the description of APOE functions in the brain, and the understanding of its role in the development of the illness. At the same time, it shows how Alzheimer’s can affect each gender differently.

The Apolipoprotein gene (APOE) can occur in three variants in humans: E2, E3 and E4. APOE4 can cause structural and functional alterations to the brain and is the principal genetic risk in the development of the most common type of Alzheimer’s disease, called sporadic, which appears in 99% of cases (the remaining 1% corresponds to familial Alzheimer’s).

Researchers from the INc-UAB and the Department of Biochemistry and Molecular Biology at the UAB, coordinated by Roser Masgrau and Elena Galea, who is also an ICREA researcher, have now published a study in the journal Molecular Neurodegeneration that adds new data on the brain functions of APOE and the mechanisms by which the E4 variant could be key to the development of the disease.

The study demonstrates that APOE4 causes alterations in the lysosomes of astrocytes. Lysosomes are cellular organelles with diverse functions such as the breakdown of substances that the cell does not need anymore. These alterations in the lisosomes increase calcium signals, the main system by which the cell responds to stimuli and impede their modulation by lipids.

The research also shows that alterations in calcium signals appear in female mice expressing APOE3 or APOE4 variants, though the age or lipid regulation could imply a positive evolution for females with E3, according to the hypothesis of the researchers.

“The article corroborates the need to keep in mind gender differences when studying APOE4 and Alzheimer’s disease,” explains Raquel Larramona, Ph.D. student at the INc-UAB when the study was carried out, and first author of the article.