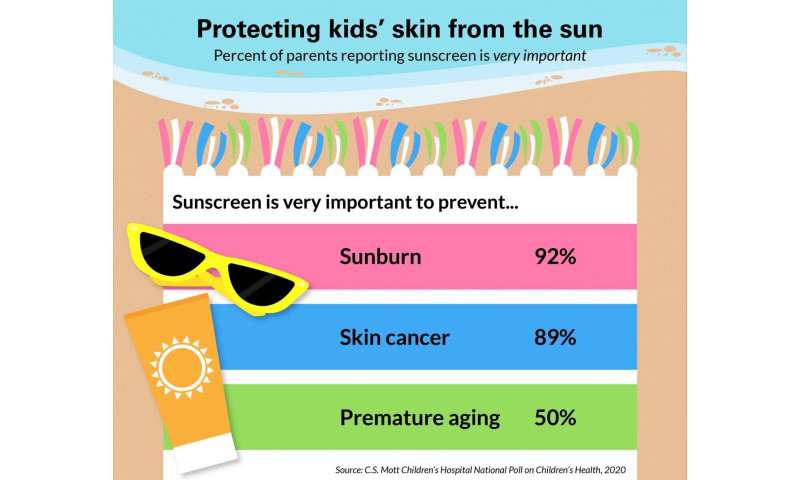 While the majority of parents recognize the importance of sunscreen, they may not always use best practices to protect children from getting burned, a new national poll suggests.

One in 10 parents (11%) say they do not have a specific minimum SPF they use and 3% report they do not use sunscreen for their child, according to the C.S. Mott Children’s Hospital National Poll on Children’s Health at Michigan Medicine.

Half of parents also indicated they may not reapply sunscreen unless their child was playing in the water while one in three don’t re-apply on a cloudy day, even though clouds don’t block all of the sun’s UV rays that may cause burns and skin cancer.

“Children are spending more time in the sun and possibly at beaches and pools as families enjoy outdoor summer activities. But too much sun exposure can be dangerous and damage the skin,” says Mott Poll co-director and Mott pediatrician Gary Freed, M.D., M.P.H.

“The majority of parents understand the importance of using sunscreen, but they may not always use a high enough SPF or reapply as often as they should to protect their children’s skin.”

The nationally-representative report is based on responses from 1,120 parents of children ages 5-12.

The majority of parents have at least sometimes used sunscreen on their kids and say it’s very important in preventing sunburns and skin cancer. Half of parents also believe sunscreen is vital in preventing premature aging and wrinkling, according to the survey.

“Parents should be aware that UV rays from the sun can reach their children on cloudy and hazy days, not just on bright and sunny days,” Freed says. “Children need protection regardless of the amount of sunshine.”

In order to be effective, sunscreen also needs to be reapplied every couple of hours and even more often if children are in the water, Freed says, since “no sunscreen is waterproof.”

Sunscreens labeled “water resistant” are required to state whether the protection remains effective for 40 minutes or 80 minutes when swimming or sweating.

Freed recommends parents choose sunscreens with a minimum SPF of 15 to 30 that is “broad-spectrum,” which means it protects against the two harmful types of UV radiation; ultraviolet B (UVB) and ultraviolet A (UVA). Parents should also try to limit sun exposure during the peak intensity hours of between 10 a.m. and 4 p.m.