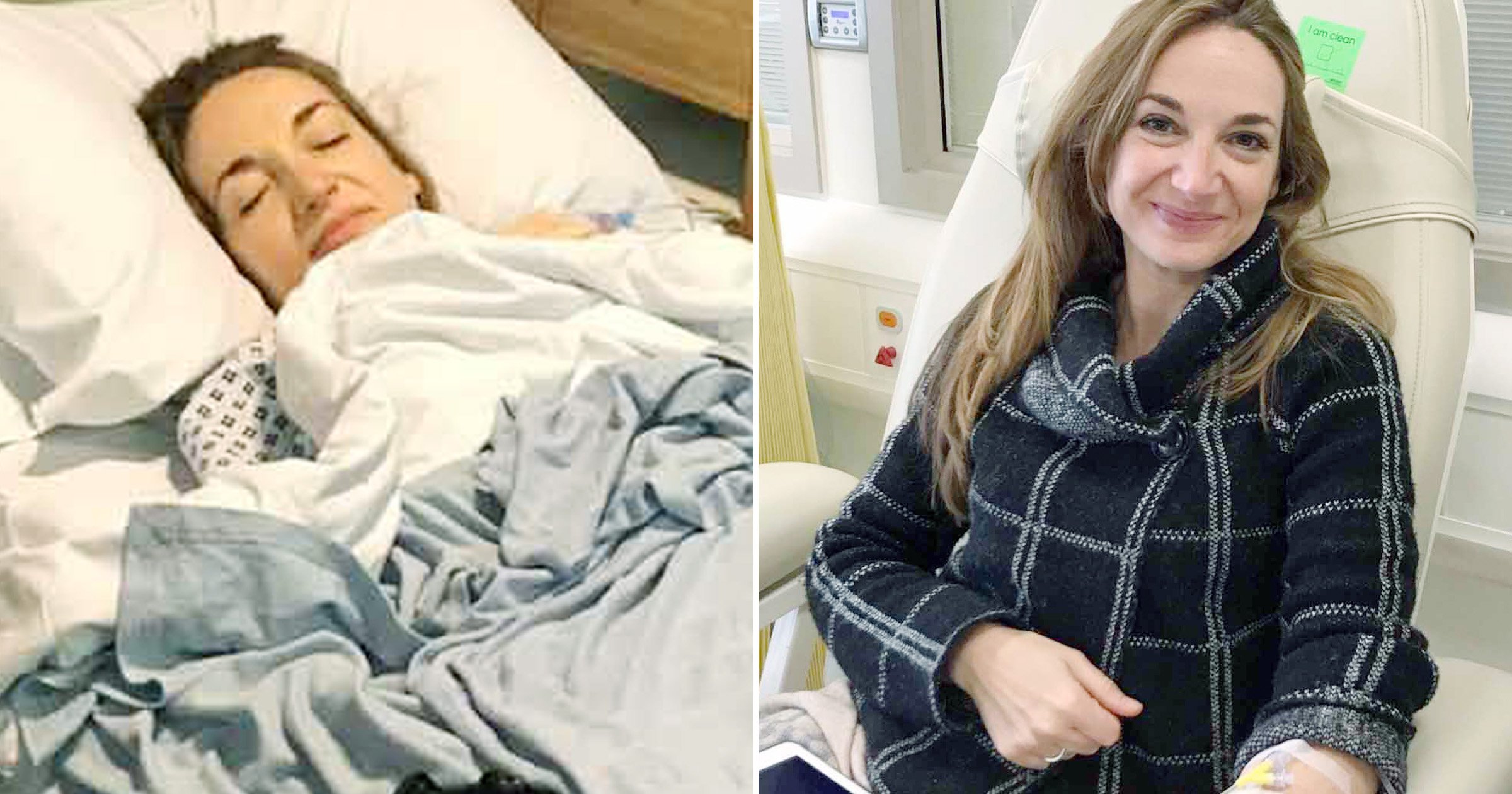 Tasha Thor-Straten’s life changed forever when she finally told a doctor that she was finding blood in her stool.

The doctor referred the mum of two for a colonoscopy, and a week later she was dealt some awful news: she had bowel cancer. It had spread to her lungs. She was offered palliative care.

‘It was utterly shocking and devastating,’ said Tasha.

‘It never occurred to me that my symptoms could be bowel cancer. I was fit, healthy and took care of my diet and there was no history of it in my family.

‘To find out that not only was it cancer, but that I was going to die from it was almost too much to bear.’

Disorientated, Tasha, 49, started planning her funeral when she should have been settling into the home she had just bought with her partner, 47-year-old mortgage broker Russ Parker.

She said: ‘I just couldn’t believe this was happening to me. I was constantly in floods of tears and had some very emotional conversations with the kids.’

Three months before this devastating diagnosis, Tasha had moved in with Russ in Rochford, Essex.

They were looking forward to life with their blended family, including the five children the now finances have from previous partnerships.

Tasha shares joint custody with the parents of her children 17-year-old Amy, and Theo, 13, while Russ has the same arrangement with the mother of his three children.

Tasha matched with Russ on a dating app in April 2016, not expecting much to come of it.

‘I’d been single for three years and wasn’t particularly interested in a relationship when my friend convinced me to join a dating app,’ she said.

‘It was a while before we introduced our children to each other, but the timing felt right and by the end of the year, we’d found a house big enough for our blended family and moved in together.’

Then, Tasha started spotting blood in her stool. But she brushed it off.

‘I didn’t think anything of it and I assumed it was just down to things like work or parenting stress,’ she noted.

‘I went to my GP surgery twice and chickened out on saying anything because I was scared about the process and what might happen next.

‘When I look back on that time, there were other symptoms, such as pain in my stomach when exercising and lower back pain, but I put this down to over-exertion.’

By Christmas 2016, the blood loss had become so bad that Tasha decided to finally tell a doctor.

After further tests, including CT scans and an MRI, she was given the terrible news.

She said: ‘I can’t describe the feeling when someone tells you that you have a terminal illness.

‘I was only 44, with young kids and a new relationship and suddenly the rug was being pulled from under my feet.’

Thankfully, when Tasha returned to her doctor in February 2017, they discovered the lung nodules were not cancerous. She was rediagnosed with stage 3 cancer, meaning she was eligible for invasive and potentially life-saving surgery.

‘There was no time like the present,’ said the mum.

‘I went in for my operation on February 28. They cut out the part of my bowel where the cancer was, which was about a 35mm tumour and then they had to put my bowel back together again.

‘When they were discussing the process with me, the surgeons warned that there was a high chance that they would need to fit a stoma bag during the operation, so I had to mentally prepare myself for it.

‘But when I woke up afterwards, I discovered that they had not ended up needing to do so, which I was very relieved about.’

Next came the rounds of chemotherapy, which left her with awful side effects including extreme tiredness, sadness, nerve pain and a negative reaction to sunlight and the cold.

Still, the treatment worked, and in August 2017 Tasha was given the all-clear.

During her treatment, she’d contacted Dame Deborah James, who became known for her Bowelbabe blog, which she launched during her own battle with bowel cancer.

‘I saw on social media that she was struggling to sleep due to treatment. I was going through the same thing, so I messaged her,’ she said.

‘It was really nice to talk to someone who understood exactly what I was going through. She offered me some nuggets of advice and it was a real comfort.’

This, as well as gratitude for being alive, pushed Tasha – who used to work in manufacturing – into a career change.

‘I feel incredibly lucky to still be here today, which is why I now work as a life coach helping other cancer patients to understand things like how their diet can improve their health during treatment,’ she said.

She said: ‘As someone who received the worst diagnosis imaginable, I want to help others along the route as they navigate their journeys.’

Given her own experience, she offers specific advice on managing your health during a bowel cancer diagnosis.

‘Although I considered myself to be fit and healthy at the time of my diagnosis, my diet has been tweaked since then. I can no longer digest red meat and processed foods. I also steer clear of beans and regularly visit a homeopath and look for ways to improve my gut health.

‘This is something I help other people with too. I use my skills to help others who are living with cancer to thrive.’

Russ and Tasha got engaged in March 2019 and are now looking forward to their life together.