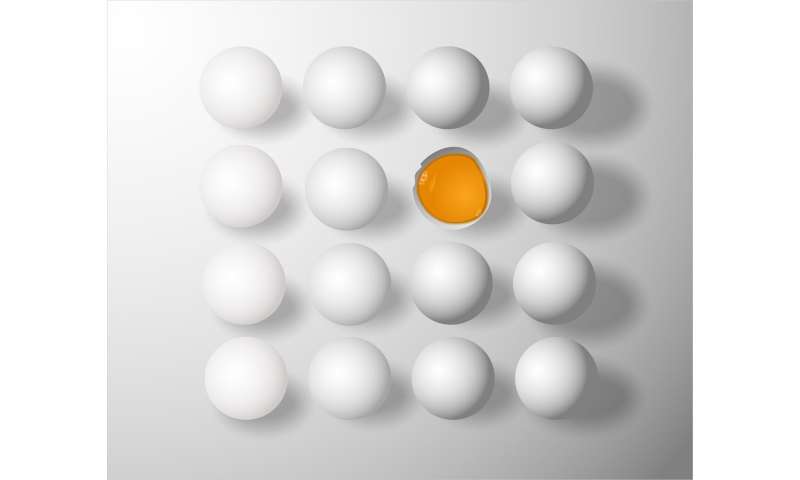 A new study published by The BMJ today adds to evidence that moderate egg consumption (up to 1 egg per day) is not associated with cardiovascular disease (CVD) risk.

Eggs are an affordable source of high-quality protein, iron and unsaturated fatty acids, but due to their cholesterol content, the association between egg intake and CVD risk has been a topic of intense debate over the past decade.

Many studies have reported conflicting findings, and even previous meta-analyses have not provided consistent results, which has created further confusion.

To evaluate the association between egg intake and CVD, repeated measures of diet and lifestyle factors over a long period of time are needed. It is also important to consider the effect of eggs on CVD risk compared with other animal and plant-based foods.

So a team of US researchers investigated the link between egg intake and cases of CVD—including non-fatal heart attack, fatal coronary heart disease and stroke—using repeated measures of diet over a period of up to 32 years, starting from 1980.

Their findings are based on data from three large US cohort studies: The Nurses’ Health Study (NHS), the NHS II, and the Health Professionals’ Follow-Up Study (HPFS). These included 83,349 female nurses aged 30-55; 90,214 female nurses aged 25-44; and 42,055 male health professionals aged 40-75, respectively, who were free of CVD, type 2 diabetes, and cancer at the start of the study.

During the follow up period, there were 14,806 cases of CVD, including 9,010 cases of coronary heart disease and 5,903 cases of stroke. Most people ate between one to five eggs per week, and those with a higher egg intake had a higher BMI, were less likely to be treated with statins, and ate more red meat.

After adjusting for age, lifestyle, and dietary factors, no association was found between egg intake and risk of CVD.

There was an estimated higher risk of CVD when the researchers statistically replaced one whole egg a day with one serving of processed red meat (15%), unprocessed meat (10%) or full fat milk (11%), but foods such as fish, poultry, legumes, cheese and nuts in place of eggs were not linked to CVD risk.

Results from an updated meta-analysis of 28 observational studies further support the overall lack of an association between egg intake and CVD risk, but evidence varied between studies conducted in the US, Europe and Asia.

There was no overall association between egg intake and CVD risk among US and European studies, but moderate egg consumption was associated with a slightly lower CVD risk in Asian populations.

This is potentially explained by the fact that in Asian cultures, eggs are typically included in a variety of different dishes, while in Western populations, eggs tend to be eaten with red and processed meats and refined grains.

This is an observational study, and as such, can’t establish cause. And the authors point to some limitations, including that the three cohorts were made up of health professionals, therefore the findings may not be reflective of the general population. What’s more, people with higher egg intake were generally less healthy.

The authors highlight that the high rates of follow up and large sample size are key strengths, but say that their results need to be interpreted in the context that the average egg consumption was relatively low.

In a linked editorial, Professor Andrew Odegaard at the University of California, Irvine says that the results of the study are convincing, but “we should not put all our eggs in this observational basket for formal guidance on eating eggs.

“If frequent egg consumption is occurring in the context of an overall dietary pattern known to be cardioprotective, or eggs are being consumed for essential nutritional needs, then it is probably nothing to worry about,” he says.