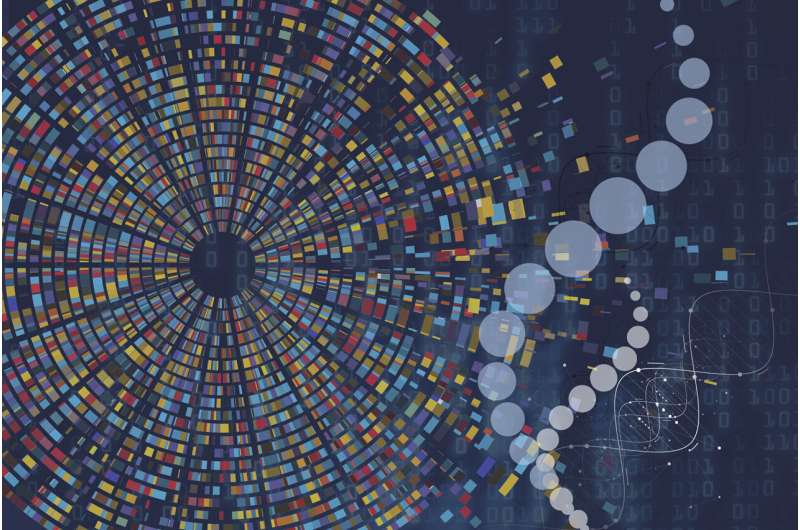 This year, the public was introduced to messenger ribonucleic acid, or mRNA, when it became a hero in the worldwide race to develop COVID-19 vaccines. Scientists lab-engineered mRNA to instruct human cells how to recognize, and then destroy, the spike protein that is the entryway for the virus.

Highly effective and precise, the approach offered a glimpse into the power of mRNA technology. Messenger RNA could one day help the human body tackle diseases like cancer with the same effectiveness.

Yanjun Qi, an associate professor of computer science in the University of Virginia’s School of Engineering and Applied Science, could hold the key to making that happen.

Before that potential can become a reality, however, researchers must discover what instructions the genes in our DNA are sending through messenger RNA.

Qi is on the leading edge of this discovery. She is using powerful deep-learning models to analyze biomedical data to uncover how genes and messenger RNA interact.

“The relationship between the DNA’s instructions; their messengers, the mRNA; and how they direct cell activity is not really clear for the majority of disease,” Qi said. “What we are trying to understand is the DNA-to-the-messenger-RNA step, because it informs us how the genetic code is connected to the expression of disease.”

Uncovering those connections could lead to a future with highly targeted therapies. Just as mRNA can instruct a cell to block a virus from invading the body, the DNA’s messengers could one day arm cells with the relevant instructions to mount a front-line defense against disease, well before it can even take hold.

Qi stresses that the work is in the earliest stage of discovery.

“Huge amounts of data about genetic code are being compiled,” she said. “The question is how to make sense out of that data for useful purposes. We are creating artificial intelligence tools to find things that are entire unknowns right now. We are talking about long time horizons, and we believe we are going to get there.”

The far-reaching finish line reflects the sheer size of the task. A human’s genetic code includes 6 billion data points that are contributing to gene expressions, which are then connected to the more than 1013 (10 million million) cells of the human body.

“There are biological pathways from genes to the mRNAs to proteins that perform millions of functions,” Qi said. “Decoding such a massive amount of detail into specific pathways for disease is a gargantuan task.”

That is where the powerful artificial intelligence-based computer models come into play. They can detect patterns in the data that make it easier to find those connections.

“A model can generalize inferences from what it has seen before and apply that to unknowns and more quickly recognize something new,” Qi said. “Each new finding helps narrow focus of the ongoing search because the computer is learning from the history of the data to recognize basic rules.”

When new rules are uncovered, researchers can extrapolate them and go outside the existing knowledge.

In her role as adjunct faculty member in both the UVA School of Medicine’s Center for Public Health Genomics and the UVA School of Data Science, Qi collaborates with biological researchers in different areas of medicine to model data for a better understanding of genetic code and its relationship to disease.

A lifelong interest in holistic and natural approaches to science, combined with a keen desire to create the mathematical tools to solve complex problems, put Qi on the path that overlaps AI with biology and medicine.

“Computer science is a skill and a tool because the algorithms we create are agnostic and can tackle any task,” she said. “A good tool can profoundly solve the task.”

Qi’s longest-running collaboration since joining UVA Engineering in 2013 is with Center for Public Health Genomics resident member Clint L. Miller, an assistant professor in the School of Medicine’s Department of Public Health Sciences. The two have created a tool that can be used on specific data to study genetic factors related to cardiovascular disease risk.

Miller initially reached out to Qi for her expertise when a student in his lab expressed interest in learning more about artificial intelligence methods.

“After the first meeting, we realized that we had complementary research programs and similar interests, so we naturally started collaborating,” he said.

Miller points out that the fields of genomic medicine and genetic-informed drug discovery are rapidly evolving due to the plummeting cost of DNA sequencing combined with the rise of more scalable computational analysis tools.

“We are now at a key inflection point where the integration of large-scale human genetic datasets with AI-based predictive algorithms can be harnessed to develop the next generation of precision medicines,” he said. “The goal of our work in this space is to accelerate the discovery and translation of genetic-based medicines.”

Miller, who holds secondary appointments in biomedical engineering as well as biochemistry and molecular genetics, believes that the key to innovation lies in bridging knowledge gaps across disciplines. By combining his expertise in the biology of disease with Qi’s knowledge of machine learning, they hope to answer the most pressing biomedical questions in the field.

In every collaboration, Qi equally weighs the power of listening, learning and forming understandings with the power of the AI models themselves.

“I am always trying to build good tools,” she said. “In order to create good tools, you have to understand your user. I seek to understand the problems that the biologists I collaborate with are trying to solve—specifically what data are they using.”