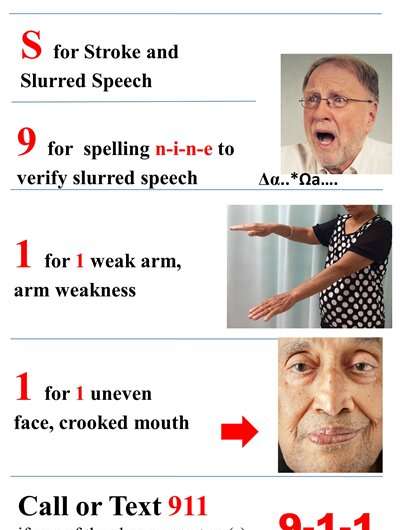 With an increase in remote work, virtual meetings, and video chats, many of us may not realize we are now on the front lines of stroke detection via the speakers on our computers, phones and other devices.

Across the world, fewer people are going to the hospital to be treated for stroke, but that’s not because fewer people are having them. In July, Renyu Liu, MD, a professor of Anesthesiology and Critical Care in the Perelman School of Medicine at the University of Pennsylvania published a study in CNS Neuroscience & Therapeutics that found that since the start of the COVID-19 pandemic the global average for stroke hospitalizations decreased by about 42 percent, statistics spurred by people afraid to seek emergency medical care for fear of catching COVID-19. In a recently published editorial in the same journal, Liu suggests that that the pandemic, with its social distancing and mask wearing, may be also be contributing to a decline in people recognizing the common warning signs of stroke.

Traditionally, FAST (Face, Arms, Speech, Time) has been the acronym used to educate the public about stroke symptoms. Liu points out that this acronym puts its greatest emphasis on symptoms that are harder to notice during the pandemic: Facial drooping is one of the common signs of stroke, but you might not notice it on someone who is wearing a mask, or standing far away. When we’re all spending less time apart, and socially distanced when we are around others, arm weakness may also fly under the radar. With a major shift to more video chats as a main means of communication, speech disturbance may be the only sign of stroke people might readily be able to pick up on. For example, in October during a virtual learning session, a Michigan teacher noticed the slurred speech of the grandparent of one of her students, quickly arranging for 911 to be called to the home, potentially saving the grandmother’s life.

All of this is why Liu and his collaborators suggest an alternative to the FAST acronym, which places facial drooping and arm weakness ahead of speech disturbance. Liu proposes the adoption of Stroke 9-1-1 (S911), a novel program, where “S” represents “Stroke” and “Speech Disturbance” while urging people to immediately call 911. The 9 also stands as a reminder to get people to spell n-i-n-e to verify slurred speech, the 1 stands for one weak arm, and the second 1 stands for 1 uneven face, crooked mouth.

Liu also argues that FAST relies heavily on people’s understanding of the English language, and that S911 is easier to remember.

He hopes that Stroke 911 can be used as a practical alternative tool to promote the stroke awareness with an emphasis on the speech disturbance. And it’s not the first time he has proposed a change like this. In 2017 Liu, who grew up and practiced medicine in China before coming to the U.S., noticed that FAST was not the best acronym for a population that didn’t speak English as a first language. He collaborated with Jing Zhao, MD, Ph.D., a neurologist at Minhang hospital, Fudan University, China, to create a new system without a language barrier. They used Stroke 120, because 120 is China’s emergency number and it caught on quickly.