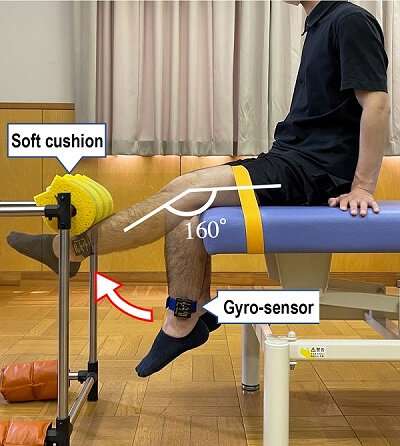 “Speed or strength, which is more important?” This may be a critical question not only for athletes, but also knee surgery patients. Osaka Metropolitan University scientists have revealed that knee extension velocity while seated is a stronger predictor of walking performance than muscle strength in elderly patients after their total knee arthroplasty (TKA) surgery.

TKA is the most common surgical intervention for knee osteoarthritis, a musculoskeletal disorder that mainly progresses with age. This surgery has been shown to be effective in relieving pain and restoring joint range of motion; however, TKA-enabled improvement in gait function may not be sufficient.

Although the strength of the quadriceps—a muscle used to extend the knee—has been deemed to have a significant effect on postoperative gait function in TKA patients, there are many cases in which gait function does not improve even after quadriceps strength is restored. This raises a need to identify other factors influencing gait function.

A research team led by Professor Akira Iwata, from the Graduate School of Rehabilitation Science at Osaka Metropolitan University, hypothesized that the movement velocity of knee extension (i.e., knee extension velocity) is a strong determinant of gait function in TKA patients, and tested this hypothesis on 186 elderly patients who underwent TKA.

Measurements were taken before and at two and three weeks after surgery and included gait function (gait speed and Timed Up and Go test), knee extension velocity, quadriceps strength, knee range of motion, and knee pain. Multiple regression analysis was performed to analyze the relationship between gait function and other variables.

The results show that the knee extension velocity on the operated side was the most important predictor of gait function in the participating patients. The findings were published in PLOS ONE.

“Thus far, rehabilitation programs aimed at recovering gait function after TKA surgery have focused on training to improve quadriceps strength,” explained Professor Iwata. “However, this study’s results suggest that training to enhance knee extension velocity on the operated side could be effective. We will continue to examine the effects of rehabilitation that concentrates on movement velocity.”