Don’t expect to enjoy retirement! Only 9% of men will escape misery of back pain, diabetes and other conditions by the time they can collect their pension, report warns

Less than one in 10 British boys born today will reach retirement in good health, an analysis warned today.

Meanwhile, just only one in six women will be free of crippling back pain, arthritis or diabetes by the time they can collect their pension.

That is according to a report from the Institute for Public Policy Research (IPPR) think tank and charity Future Health.

While life expectancy has generally increased since the 1970s, so has the number of years spent in ill health.

It means today’s generation of children are expected to spend the better part of two decades at the end of their life plagued with crippling health conditions like arthritis and dementia.

But people born in the poorest parts of the country, like Blackpool, fall into a state of ill health ‘well over 10 years’ before state retirement, the report warned. 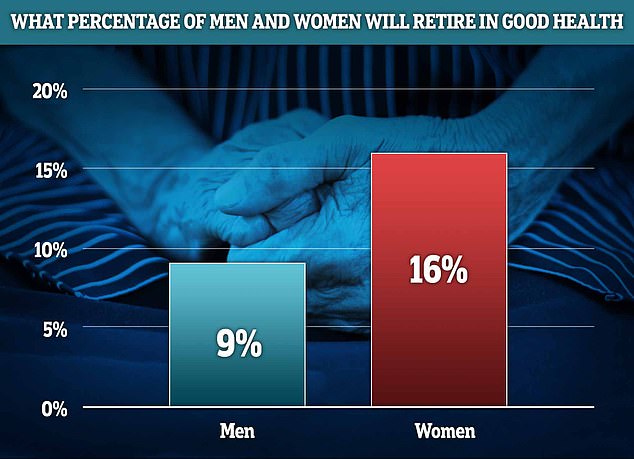 You could find some surprising treatments on offer when you next visit your GP surgery.

Instead of a prescription for pills, you might be given one to join a walking group, or an arts society, or to work on an allotment.

This is known as ‘social prescribing’, a radical approach to treatment being rolled out by the NHS.

The aim is to help patients who have chronic problems that standard treatments haven’t helped, to help themselves.

Later this week, a group of senior politicians and retired NHS grandees are backing the launch of the Beyond Pills campaign, which urges the Government to make it happen faster.

Obesity, a lack of exercise and smoking are driving the problem, experts say.

Chris Thomas, IPPR principal research fellow, said: ‘It’s shocking that so many people don’t even make it to retirement age before the effects of ill health start to take a toll on their lives.

‘The fact that it is the poorest that are likely to suffer ill health earlier shows that this is preventable.

‘Ensuring more people can live more of their lives in good health is possible.

‘And a key part of this is ensuring we have a sustainable NHS, capable of improving population health even in hard times.’

The age at which someone can start collecting their state pension — worth less than £10,000 a year — currently stands at 67.

But it will rise to 67 by 2028, despite experts urging ministers to abandon the plans.

The average life expectancy for Britons is 79 for men and 82.9 for women, meaning everyone is expected to live for at least a decade after retirement.

But a Health Foundation analysis this year revealed that women in the poorest parts of England can expect to live for nearly eight years less than those in the wealthiest parts of the country.

Official Government research estimates that boys born between 2013 and 2015 will on average live a healthy life for 63.4 years but then spend another 16.1 years in poor health before dying,

And girls on average will be healthy until 64.1-years-of-age and will then be ill for another 19.1 years.