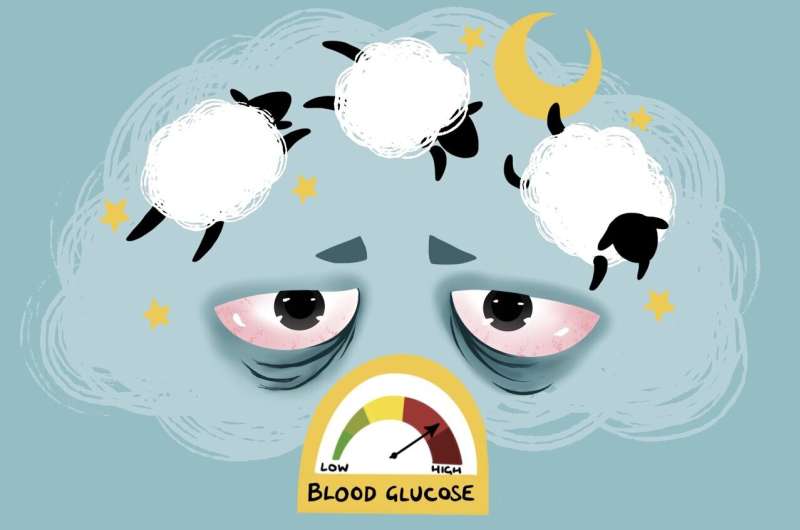 People who have difficulty getting to sleep or staying asleep had higher blood sugar levels than people who rarely had sleep issues, new research has found. The findings suggest insomnia could increase people’s risk of type 2 diabetes, and that lifestyle or pharmacological treatments that improve insomnia could help to prevent or treat the condition.

The study, led by the University of Bristol, supported by the universities of Manchester, Exeter, and Harvard, and funded by Diabetes UK, is published in Diabetes Care.

Insomnia, not getting enough sleep, and having a later bedtime, have been linked in previous studies to a greater risk of type 2 diabetes. In this study, the research team assessed whether these associations are explained by causal effects of sleep traits on blood sugar levels.

The study of over 336,999 adults living in the UK, showed that people who reported that they often had difficulty getting to sleep or staying asleep had higher blood sugar levels than people who said they never, rarely, or only sometimes had these difficulties. The research team found no clear evidence for an effect of other sleep traits on blood sugar levels.

The findings could improve researchers understanding of how sleep disturbance influences type 2 diabetes risk. The study also suggests that lifestyle and/or pharmacological interventions that improve insomnia might help to prevent or treat diabetes.

James Liu, Senior Research Associate in the Bristol Medical School (PHS) and MRC Integrative Epidemiology Unit (IEU) and corresponding author on the paper, said: “We estimated that an effective insomnia treatment could result in more glucose lowering than an equivalent intervention, which reduces body weight by 14kg in a person of average height. This means around 27,300 UK adults, aged between 40- and 70-years-old, with frequent insomnia symptoms would be free from having diabetes if their insomnia was treated.”

Currently, there are some treatments for insomnia. For example, UK guidelines to doctors recommend cognitive behavioral therapy (CBT) for insomnia, and short-term treatment of sleeping tablets or treatment with a hormone called melatonin if CBT does not work.

Dr. Faye Riley is Research Communications Manager at Diabetes UK. She said: “We know from past research that there’s a link between sleep and a person’s risk of type 2 diabetes, but it hasn’t been clear which comes first, bad sleep or higher blood sugars, or if other factors are at play.

“This new study, funded by Diabetes UK, gives us important insights into the direction of the relationship between sleep and type 2 diabetes, suggesting that insufficient sleep can cause higher blood sugars levels and could play a direct role in the development of type 2 diabetes. Knowing this could open up new approaches to help prevent or manage the condition.

“However, it’s important to remember that type 2 diabetes is a complex condition, with multiple risk factors. Eating a healthy balanced diet, being active, along with getting enough sleep, are all essential components of good health for everyone—including those at risk of, or living with, type 2 diabetes.”