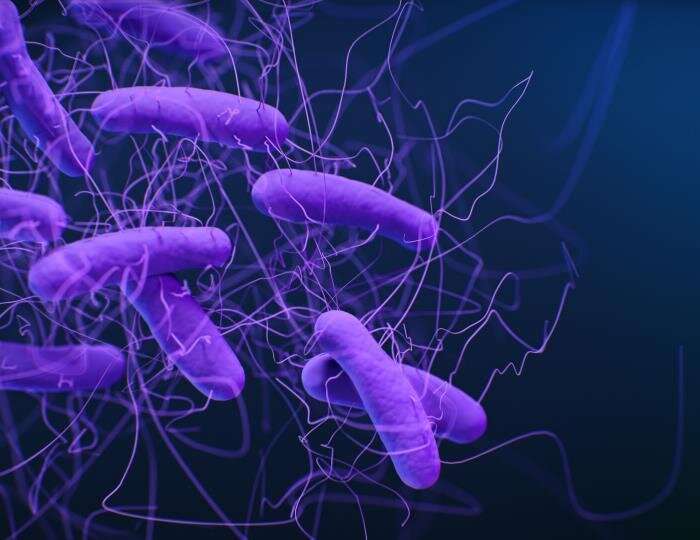 A new study from North Carolina State University shows that the inflammation caused by Clostridioides difficile (C. diff) infection gives the pathogen a two-fold advantage: by both creating an inhospitable environment for competing bacteria and providing nutrients that enable C. diff to thrive.

C. diff is a bacterium that causes diarrhea, often with severe or even fatal consequences. As part of its growth cycle, C. diff produces two toxins which cause inflammation and damage the lining of the gut.

“C. diff thrives when other microbes in the gut are absent—which is why it is more prevalent following antibiotic therapy,” says Casey Theriot, associate professor of infectious disease at NC State and corresponding author of the research. “But when colonizing the gut, C. diff also produces two large toxins, TcdA and TcdB, which cause inflammation. We wanted to know if these inflammation-causing toxins actually give C. diff a survival benefit—whether the pathogen can exploit an inflamed environment in order to thrive.”

Theriot and former NC State postdoctoral researcher Josh Fletcher led a team that studied two varieties of C. diff – one that produced the toxins and a genetically modified strain that did not—both in vitro and in a mouse model. In both models, toxin-producing C. diff was associated with increased inflammation and cellular damage. Genetic analysis found that C. diff in an inflamed environment expressed more genes related to carbohydrate and amino acid metabolism. Finally, in vitro experiments demonstrated that C. diff was able to utilize amino acids from collagen for growth.

“C. diff’s toxins damage the cells that line the gut,” Theriot says. “These cells contain collagen, which is made up of amino acids and peptides. When collagen is degraded by toxins, C. diff responds by turning on expression of genes that can use these amino acids for growth.”

The researchers also noted that an inflamed environment suppressed the numbers of other microbes in the gut. So the toxins play a dual role: by causing inflammation, C. diff both removes competition for resources and creates more resources for its own growth.

“I always found it interesting that C. diff causes such intense inflammation,” Fletcher says. “Our research shows that this inflammation may contribute to the persistence of C. diff in the gut environment, prolonging infection.”