E-cigarette users are 50 per cent more likely to suffer from gum disease than non-smokers, study finds

People who vape may be more prone to suffering from gum disease, research suggests.

Scientists have shown that e-cigarette vapour alters bacteria in the mouth, making gums more sensitive to inflammation and infection.

The study by the New York University found vapers were 50 per cent more likely to develop gum disease than non-smokers.

While it is widely known that traditional tobacco cigarettes increase the risk of gum disease, little is known about the impact of vaping.

The latest study adds to the limited understanding of the safety of e-cigarettes, which Public Health England claims is ’95 per cent safer than traditional cigarettes’. 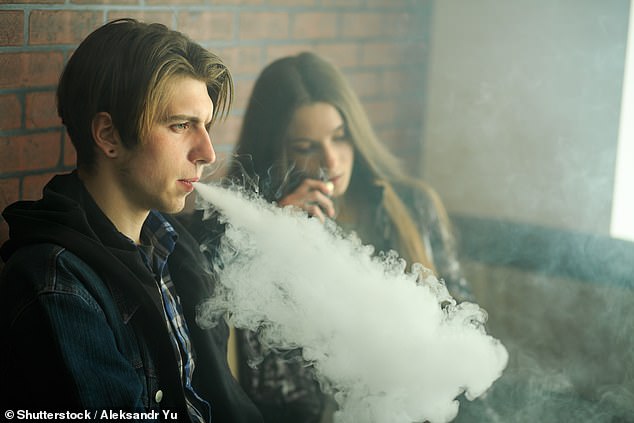 A New York University College of Dentistry study of 119 people, who were smokers, non-smokers or used e-cigarettes, looked a gum disease or infection (file)

Through oral exams and saliva samples, the researchers studied the oral microbiome of the participants was significantly higher among cigarette smokers.

The oral microbiome is the species that colonise humans’ respiratory and digestive tracts.

Lead author Professor Xin Li said: ‘Given the popularity of vaping, it is critical that we learn more about the effects of e-cigarette aerosols on the oral microbiome and host inflammatory responses in order to better understand the impact of vaping on human health.  ‘

HOW COULD VAPING BE HARMFUL?

E-cigarettes have the potential to benefit some people, by helping them quit smoking. But scientists still have a lot to learn about whether e-cigarettes are truly effective for quitting smoking and what the long-term risks are.

Nicotine is already known to be highly addictive and harm adolescent brain development, which continues into the early to mid-20s.

E-cigarettes produce an aerosol by heating a liquid that usually contains nicotine. Aerosol is inhaled into the lungs and can contain potentially harmful substances, including heavy metals like lead, volatile organic compounds, and cancer-causing agents.

US health officials, the Centers for Disease Control and Prevention (CDC), are investigating an outbreak of e-cigarette or vaping, product use associated lung injury (EVALI).

The mystery illness has swept across the states. Officials have identified Vitamin E acetate as a chemical of concern. THC is present in most of the fluid samples collected from the lungs of ill people, and most patients report a history of using THC-containing e-cigarette, or vaping, products.

‘Popcorn lung’ is the nickname for bronchiolitis obliterans, a condition which damages the smallest airways in the lungs and has been linked to people with vaping-related breathing problems. However, there’s no good evidence that e-cigarettes could cause the lung condition, according to Cancer Research UK.

The flavourings in electronic cigarettes may damage blood vessels in the same way as heart disease, according to research published in June 2018.

The chemicals used to give the vapour flavours, such as cinnamon, strawberry and banana, can cause inflammation in cells in the arteries, veins and heart.

They cause the body to react in a way that mimics the early signs of heart disease, heart attacks or strokes, the study by Boston University found.

Other recent studies have also suggested smoking e-cigarettes could cause DNA mutations which lead to cancer, and enable pneumonia-causing bacteria to stick to the lungs easier.

Researchers at New York University subjected human bladder and lung cells to e-cigarette vapor, which is marketed as being healthier than tobacco.

They found the cells mutated and became cancerous much faster than expected and mice exposed to the vapour also suffered significant DNA damage.

The vapour from e-cigarettes helps bacteria which cause the condition to stick to the cells that line the airways, they said.

The effect occurs with traditional cigarette smoke and those who are exposed to air pollution high in particulates from vehicle exhausts.

The findings were published in the journal iScience.

The World Health Organisation (WHO) recently claimed that vaping is harmful to the developing brains of teenagers and can damage a growing foetus, its strongest warning yet about e-cigarettes.

The international body claimed the devices also increase the risk of heart disease and lung disorders.

It warned there was ‘little evidence’ they help smokers quit and said they may actually get non-smokers hooked on nicotine.

The WHO’s stance on e-cigarettes is in stark contrast to that of Public Health England.

PHE recommends smokers make the switch and claims it is ’95 per cent safer than smoking tobacco’.

Earlier this month, it was reported that UK watchdog the Medicines & Healthcare products Regulatory Agency (MHRA) is investigating two deaths in the past year potentially linked to e-cigarettes. It has also received 20 reports of serious adverse reactions to vaping.

Cigarettes involve burning tobacco — delivering addictive nicotine to the user and 4,000-plus chemicals, including tar which is known to be toxic to the human body.

Meanwhile, e-cigarettes or vapes are devices that heat liquid in a refillable tank to generate a nicotine ‘vapour’, which comes in different flavours and is inhaled through a mouthpiece.

More than 20 countries have banned vaping and others have beefed up regulations. In the UK sale of vapes is permitted for over 18s; and the use of nicotine is limited to 20 milligrams per millilitre.

The first UK vaping fatality dates back to 2010, when Terry Miller, 57, of Gateshead, Tyne and Wear, swapped his 20-a-day smoking habit for e-cigarettes — only to die of the lung disease lipoid pneumonia (when fat particles enter the lungs) eight months later. Doctors discovered oil from vaping fluid on his lungs. A second UK death from vaping was reported last November.

Over the past five years, research has linked vaping to a rise in around 200 health problems in the UK, including pneumonia and heart disorders, according to a report filed to MHRA last year.

Yet statistics also suggest vaping has contributed to more than 20,000 successful cessations per year — the equivalent of preventing 10,000 premature deaths.

But Public Health England’s claim that e-cigarettes are 95 per cent safer than tobacco has been branded outdated and misleading by top scientists.

The government body stands by the claim – but Virginia Commonwealth University researchers said it’s based on old evidence and is no longer relevant.

E-cigarettes have changed ‘significantly’ since the studies on which the 95 per cent line is based, they said in an opinion piece in January.

The e-cigarettes or inhaling devices themselves are now up to 20 times more powerful than they were in 2013, the researchers said, meaning they produce more chemicals in a puff.

But the team did not offer its own estimate on how much safer they are. Experts maintain, however, that vaping is ‘considerably’ better for your health.

The editorial, written by six experts based at the US university, comes as increasing numbers of health dangers are being reported by doctors.

The US is in the middle of a vaping illness crisis, with e-cigarettes thought to have struck down more than 2,500 people and killed 55.

Regulations in the US and UK are different, with American products allowed to contain more nicotine and be more aggressively advertised.

‘It doesn’t make any sense for us to claim that we know that it’s 95 per cent safer than combustible cigarettes,’ said Dr Thomas Eissenberg, one of the authors.

‘We’ve been studying cigarettes for the last 60 to 70 years and so we have a huge database with which we can look at how many people die from that behavior.

‘We don’t have anything near that kind of history with electronic cigarettes.

‘What we do know is that they are delivering toxicants to the human lung and that over repeated use, in some cases, we see health effects from those toxicants that e-cigarette users are inhaling.

‘People are using the claim as a reason to either keep using e-cigarettes if they started some time ago, or if they’ve never used nicotine before, they hear 95 per cent safer than combustible cigarettes and they say, “Well, that’s safe enough for me” and so then they start using.’

Dr Eissenberg is a director of Virginia Commonwealth University’s Center for the Study of Tobacco Products, and published the piece alongside five colleagues.

They said the safety claim, first made by independent scientists, had been ‘widely publicized, notably by Public Health England and the Royal College of Physicians’.

They did not do a scientific study of the dangers of e-cigarettes but looked at the evidence on which the 95 per cent claim was first made in 2014.

And since then, they said, the technology of the devices and the ingredients of the liquids have both changed, and more evidence has come to light of health dangers.