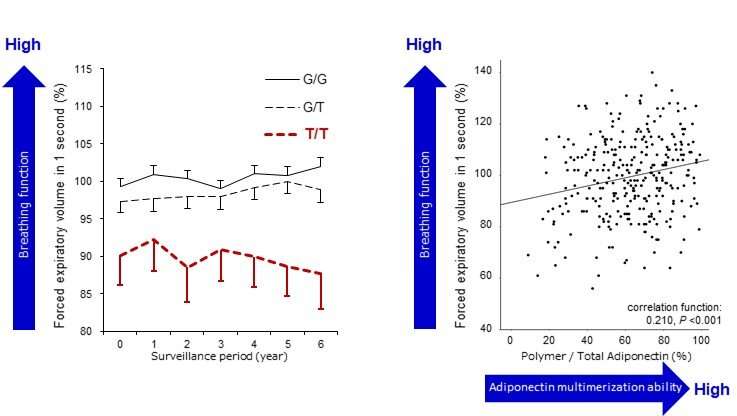 The lungs are constantly exposed to the external environment and maintain homeostasis by adapting to stress and tissue damage. Furthermore, lung function is known to decrease with age so respiratory failure can occur if their structure or function breaks down. It is therefore important for aging societies around the world to search for factors inside and outside the body that directly affect lung function.

The DsbA-L protein is present in many tissues of the body and is a known antioxidant. Although antioxidants generally have a protective effect on cells, it was unclear whether the DsbA-L protein helps to protect the lungs. It is known, however, that it activates adiponectin, a protein produced in adipose tissue (body fat) that helps regulate glucose levels and fatty acids, and enhances lung function. From previous human epidemiological studies, researchers from Kumamoto University knew that adiponectin activation differs depending on DsbA-L gene type (G/G, G/T, or T/T), but they did not know whether these differences affected antioxidant function in blood or how they affected the maintenance of lung function in humans.

To answer these questions, researchers first investigated the relationship between DsbA-L gene type and changes in respiratory function over a six-year period in 318 elderly health checkup data. They found that T/T genotype carriers, whose DsbA-L expression level is considered low, had low respiratory function. Additionally, the amount of oxidized substance (oxidized albumin) in the blood varied depending on DsbA-L gene type, indicating that this gene is related to antioxidant functionality. Further analysis of the relationship between respiratory function, one of the functions of DsbA-L, and adiponectin activation found a positive correlation between the two. Previous studies showed that differences in the DsbA-L gene type were associated with reduced adiponectin activation. This combined knowledge suggests that differences in DsbA-L gene functions may cause lung function decline. 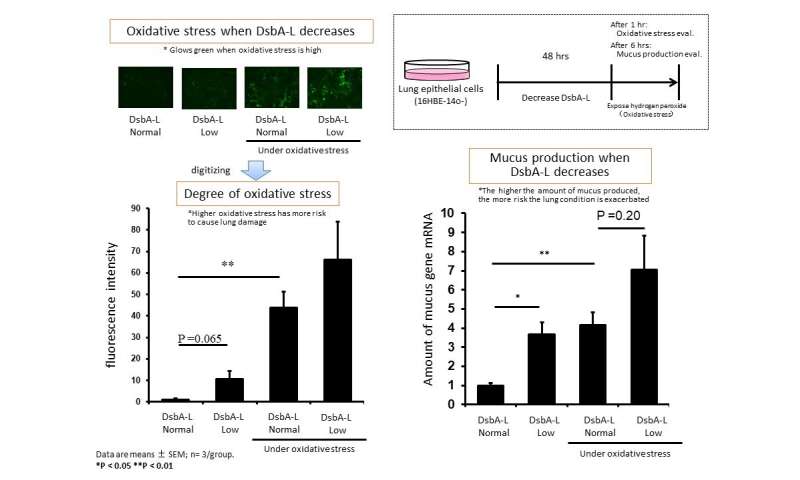 Next, the researchers examined whether DsbA-L has a direct protective effect on lung tissue. They found that decreasing the expression level of DsbA-L in human lung epithelial cells increased the degree of oxidative stress. Furthermore, a decrease in DsbA-L expression promotes the production of mucus which is known to adversely affect lung function in elderly and diseased people. These results show that DsbA-L provides pulmonary protection through direct antioxidant actions in lung epithelial cells. 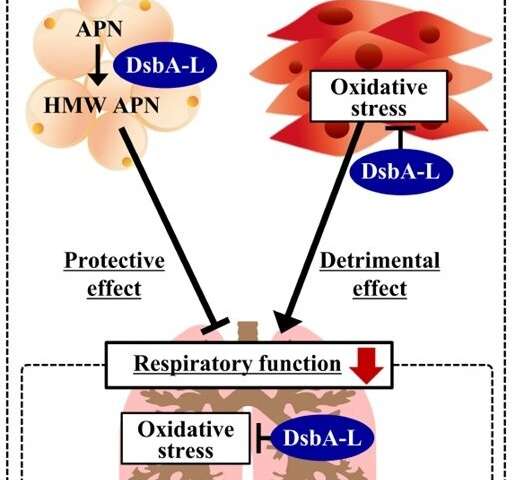 These studies using human cells have revealed that DsbA-L is an important factor in pulmonary function. It affects many tissues and organs such as the blood, adipose tissue, and lungs. The authors expect that future studies focusing on the activation of DsbA-L and the differences in genotypes can be applied to promote healthy lifestyles and lung disease treatments. In particular, the Japanese population, with its relatively higher number of T/T-type carriers of DsbA-L, may see larger effects from drugs that activate DsbA-L in those carriers.