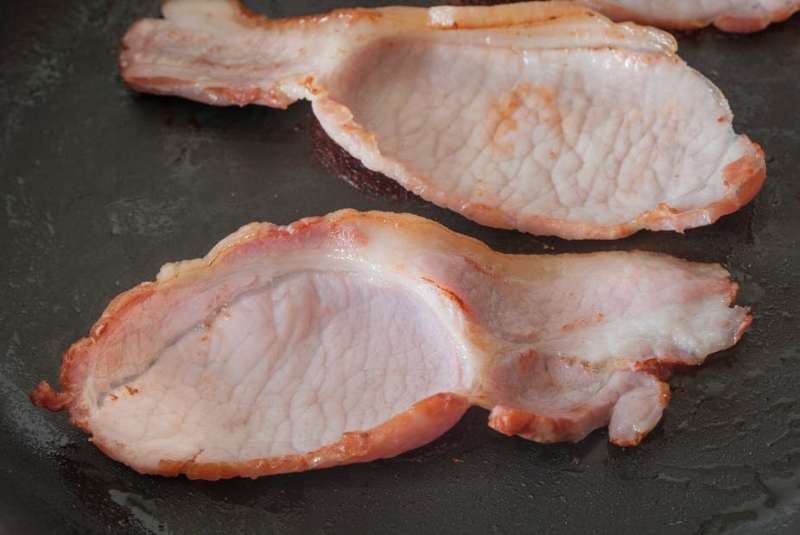 Bacon is a much-loved, comforting breakfast item—during the global pandemic, sales have surged in the US and the UK. But while bacon may be delicious, experts recommend people eat little or no processed meats because of their cancer risk. But while the cancer risk from processed foods is certainly something to think about, that doesn’t mean bacon should be totally off the menu. In fact, you might be able to lower some of the cancer risk from eating bacon depending on how you cook it.

Nitrites are perhaps the best-known cancer risk in bacon. Nitrites are used as a preservative, and are also converted in the stomach into N-nitroso compounds (NOCs), which can cause cancer.

Some bacon products are now advertised as “nitrite-free.” However, some of these products merely replace synthetic nitrite with a vegetable source, which is still converted into NOCs. These carcinogens also form when bacon is fried. Some processed meats don’t contain nitrites and aren’t cooked (such as parma ham), so they carry a lower cancer risk compared to bacon.

But avoiding nitrites will not eliminate all cancer risks from bacon. This is because frying also generates two other major groups of carcinogens. One of these is a group called heterocyclic amines (HCAs). Fried bacon contains more HCAs than any other cooked meat, and high levels of advanced glycation end products (AGEs) which are also linked to cancer.

Both HCAs and AGEs are produced by a chemical process called the Maillard reaction, which increases rapidly with heat. So your cancer risk could depend on how you cook your bacon. For instance, lightly browned bacon has only one-tenth the HCAs of well-cooked bacon. The Maillard reaction causes browning (thus producing carcinogens), so cooking methods where there’s little browning also usually result in fewer HCAs and AGEs. Hence microwaved bacon has far lower levels of AGEs than fried bacon.

Grilling/broiling bacon under a direct flame may also be unwise, as close contact with a naked flame generates very high temperatures that also cause drying on the surface of the bacon. Both of these factors increase HCA formation.

As flavor comes with frying, many bacon lovers will probably balk at the idea of only lightly fried bacon. Fortunately, it may be possible to reduce carcinogen production without compromising taste. This is because flavor molecules are produced by a different part of the Maillard reaction to that generating HCAs and AGEs.

However, some groups may be at higher risk compared to others from the cancer-causing carcinogens in bacon.

Research has found a strong association between eating processed meat and an increased risk of oesophageal cancer called oesophageal adenocarcinoma. The UK has the highest incidence in the world of this deadly type of cancer.

Due to this lack of research, current UK guidelines for the management of Barrett’s esophagus make no mention of diet. But given what we know more generally about the carcinogens in bacon causing cancer, it’s best to remain cautious.