Maybe you won’t need the gym when they finally reopen! An ‘exercise PILL’ could be on the horizon after scientists find boosting levels of a liver protein mimicked benefits of working out in mice brains

Boosting levels of a liver protein could provide the benefits to the brain that exercise does, a new study suggests.

What’s more, the findings suggest the brain benefits of working out might one day be available in the form of a pill.

The team, from University of California San Francisco Eli and Edythe Broad Center for Regeneration Medicine and Stem Cell Research, says a pill or a syringe would be particularly helpful for those who can’t exercise due to physical limitations so they could still receive the neurological benefits. 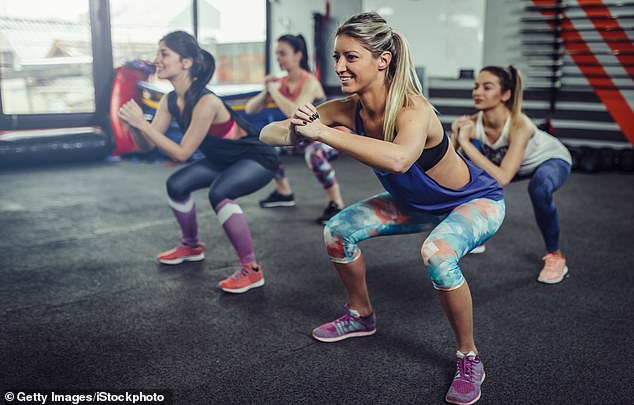 In a new study from USCF, researchers found that three weeks of overproducing a liver protein provided results in improved memory and learning in mice similar to six weeks of exercising (file image)

‘If there were a drug that produced the same brain benefits as exercise, everyone would be taking it,’ said senior author Dr Saul Villeda, an assistant professor in the departments of Anatomy and of Physical Therapy and Rehabilitation Science, in a press release.

‘Now our study suggests that at least some of these benefits might one day be available in pill form.’

Exercise has long been known as one of the best ways to protect the brain from age-related diseases, but many older adults are unable to work out to limitations or disabilities.

Researchers have been searching for decades for a therapy or treatment to provide adults who can’t exercise the same neuroprotective effects as those who can.

For the study, published in the journal Science, the researchers took blood from aging mice who exercised regularly seven weeks and transferred it into sedentary elderly rodents.

Results show that after four weeks, the less active mice showed improvements in learning and memory, and at levels similar to the exercising mice.

The team found higher production of neurons in the hippocampus, the part of the brain responsible for memories and learning ability.

To examine which specific factor was behind the results, researchers measured different proteins in the blood of the active mice versus the sedentary mice.

Out of 30 candidates, two – Gpld1 and Pon1 – emerged and scientists decided to look at the former due to lack of research on it.

‘We figured that if the protein had already been investigated thoroughly, someone would have stumbled upon this effect,’ Villeda said.

‘I like to say – if you’re going to take a risk by exploring something new, you might as well go big!’

Researchers genetically engineered the livers of old mice to overproduce Gpld1 and then tested them on learning and memory.

They found that three weeks of the treatment provided beneficial results similar to six weeks of exercising.

What’s more, levels of Gpld1 also increase in the blood of elderly adults who are active compared to those who are sedentary.

‘To be honest, I didn’t expect to succeed in finding a single molecule that could account for so much of the benefits of exercise on the brain,’ Villeda said.

‘It seemed more likely that exercise would exert many small, subtle effects that add up to a large benefit, but which would be hard to isolate. When I saw these data, I was completely floored.’

The authors say the protein provides its effects not by crossing the blood-brain barrier but rather by reducing inflammation and blood coagulation, both of which are dementia risk factors.

For future studies, the team plans to look at how Gpld1 interacts with other blood factors to boost brain function.