Researchers found that women who have the experience after menopause are 70 per cent more likely to have cardiovascular disease. And women of any age with symptoms of the condition, known as vasomotor (VMS), are more likely to have non-fatal heart attacks. Dr Dongshan Zhu, of the University of Queensland, found that VMS before the menopause increases a woman’s risk of suffering heart problems by 40 per cent.

He said: “Until now, it’s been unclear if VMS is associated with cardiovascular disease, but now we know it to be true.

“Further, VMS before menopause increases a woman’s chance of cardiovascular events by 40 per cent.”

Dr Zhu also found that the risk was more related to the severity of the hot flushes and night sweats rather than the frequency or duration.

He added: “We found that women with severe VMS were more than twice as likely to experience a non-fatal cardiovascular event compared with women who had no symptoms.” 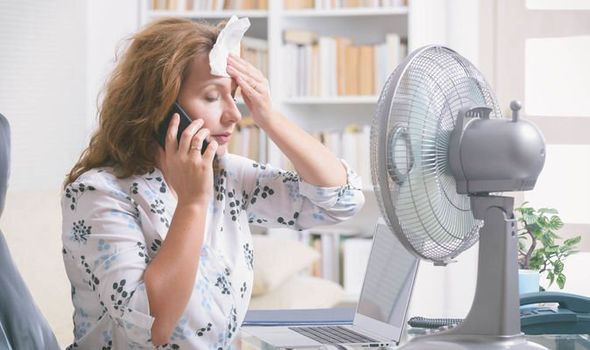 She said: “This research helps to identify women who are at a higher risk for the development of cardiovascular events and who may need close monitoring in clinical practice.”

Most women will experience hot flushes when going through the menopause. They are often described as a sudden feeling of heat that seems to come from nowhere and spreads throughout the body.

Some women have occasional hot flushes that do not really bother them, while others can have many a day finding them uncomfortable, disruptive and embarrassing.

They usually affect women who are approaching the menopause and are thought to be caused by changes in hormone levels affecting the body’s temperature control.

The study was published in the American Journal of Obstetrics and Gynaecology.