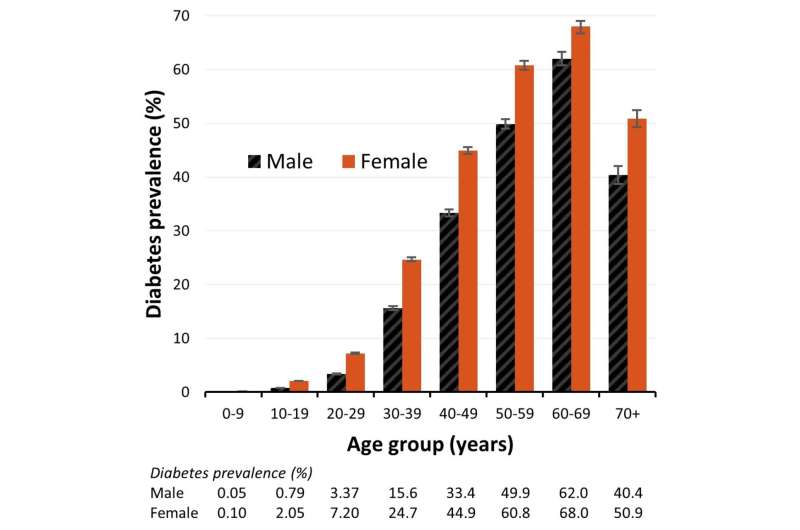 A new paper published this week shows rates of diabetes among Aboriginal people in remote Northern Territory (NT) communities are some of the highest in the world and getting worse—with the condition affecting more people, year after year.

When focusing on the adult population, the findings show a massive 29% of Aboriginal people in remote NT communities have diabetes, with the burden highest in the Central Australia region, where a staggering 40% of adults now have the condition. Diabetes is a leading contributor to kidney disease, heart disease, strokes, impaired vision and amputations due to infections.

The study analyzes seven-years’ worth of health data relating to over 21,000 Aboriginal people from 51 remote communities across the NT. It was published in the online open access journal BMJ Open.

Lead author Dr. Matthew Hare, Endocrinologist at Royal Darwin Hospital and Senior Research Officer at Menzies School of Health Research, said the burden of type 2 diabetes among Aboriginal people in remote communities of the NT is among the highest reported of any population globally, and there is an urgent need to introduce preventative strategies to address the crisis.

“Type 2 diabetes is not due to ‘lifestyle choices.’ This epidemic is strongly related to the impacts of colonization and the ongoing social and economic disadvantage experienced by many Aboriginal people in the remote NT.”

“Holistic prevention strategies need to be developed and implemented in partnership with Aboriginal community members, alongside better resourcing of clinical care for chronic conditions in remote communities,” Dr. Hare said.

Alarmingly, type 2 diabetes is seen at increasingly young ages, when previously the condition was thought to mainly affect older people. Co-author Dr. Amy Rosser, who is the Senior Remote Medical Practitioner in a desert community about 300km from Alice Springs, said Aboriginal people aged 20–39 years in remote parts of the NT are 26 times more likely to be diagnosed with type 2 diabetes than people of the same age in the national Australian population.