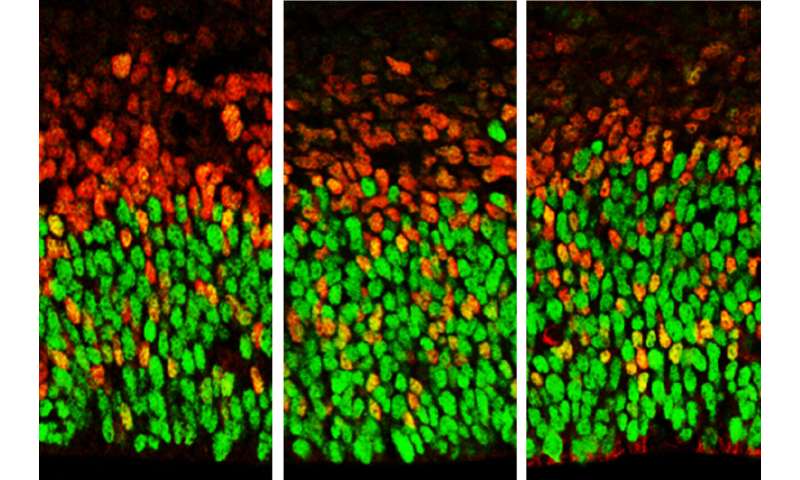 The gene, Foxp1, has previously been studied for its function in the neurons of the developing brain. But the new study reveals that it’s also important in a group of brain stem cells—the precursors to mature neurons.

“This discovery really broadens the scope of where we think Foxp1 is important,” said Bennett Novitch, a member of the Eli and Edythe Broad Center of Regenerative Medicine and Stem Cell Research at UCLA and the senior author of the paper. “And this gives us an expanded way of thinking about how its mutation affects patients.”

Mutations in Foxp1 were first identified in patients with autism and language impairments more than a decade ago. During embryonic development, the protein plays a broad role in controlling the activity of many other genes related to blood, lung, heart, brain and spinal cord development. To study how Foxp1 mutations might cause autism, researchers have typically analyzed its role in the brain’s neurons.

“Almost all of the attention has been placed on the expression of Foxp1 in neurons that are already formed,” said Novitch, a UCLA professor of neurobiology who holds the Ethel Scheibel Chair in Neuroscience.

In the new study, published in Cell Reports, he and his colleagues monitored levels of Foxp1 in the brains of developing mouse embryos. They found that, in normally developing animals, the gene was active far earlier than previous studies have indicated—during the period when neural stem cells known as apical radial glia were just beginning to expand in numbers and generate a subset of brain cells found deep within the developing brain.

“What we saw was that both too much and too little Foxp1 affects the ability of neural stem cells to replicate and form certain neurons in a specific sequence in mice,” Novitch said. “And this fits with the structural and behavioral abnormalities that have been seen in human patients.”

Some people, he explained, have mutations in the Foxp1 gene that blunt the activity of the Foxp1 protein, while others have mutations that change the protein’s structure or make it hyperactive.

The team also found intriguing hints that Foxp1 might be important for a property specific to the developing human brain. The researchers also examined human brain tissue and discovered that Foxp1 is present not only in apical radial glia, as was seen in mice, but also in a second group of neural stem cells called basal radial glia.

Novitch said that although the new research does not have any immediate implications for the treatment of autism or other diseases associated with Foxp1 mutations, it does help researchers understand the underlying causes of those disorders.