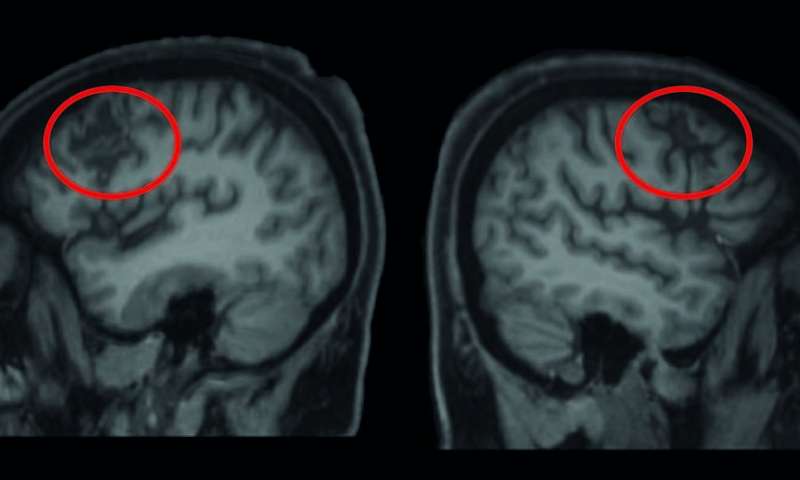 For our social life and our profession we must be able to deal with our environment and other people. Executive functions, meaning the basic intellectual abilities that control human thought and action, help us to do this. These include selective attention, otherwise known as the ability to concentrate on one stimulus and suppress others, or the working memory, with which we can retain and manipulate information. These functions also enable us to plan actions and to divide them into individual steps.

However, some people do not succeed, finding it difficult to focus, plan their actions in a goal-oriented manner, and they have poor control over their impulses and emotions. They suffer from a condition called dysexecutive syndrome, which is often caused by craniocerebral trauma or a stroke.

One of those affected is a 56-year-old patient from Leipzig. She had suffered several strokes that hit a strategically very important region of the brain: The so-called inferior frontal junction area (IFJ) in the frontal lobe of the cerebral cortex in both hemispheres. The injury meant she was no longer able to pass basic psychological tests. These include, for example, the planning task zoo visit, in which a person is required to plan a tour of a zoo in accordance with various guidelines, or the Stroop test, which measures how well someone can suppress disturbing, unimportant stimuli in order to concentrate on an actual task.

The special feature of the examined patient: The lesion was limited to the IFJ alone, in both hemispheres of the brain equally (see figure). Normally, a stroke injures larger areas of the brain or is not restricted to such a defined area. In addition, it rarely affects the homologous areas in both hemispheres of the brain at the same time. As difficult as the situation is for the patient, it offers a unique opportunity for science to investigate the role of this region for executive functions.

“From functional MRI examinations on healthy persons, it was already known that the IFJ is increasingly activated when selective attention, working memory and the other executive functions are required. However, the final proof that these executive abilities are located there has not yet been provided,” explains Matthias Schroeter, first author of the underlying study and head of the research group “Cognitive Neuropsychiatry” at MPI CBS. However, causal evidence of such functional-anatomical relationships can only be obtained when the areas are actually switched off—and thus the abilities actually located there fail. “We were able to provide this proof with the help of this patient.”

And not only that; in addition to the classic approach—assigning individual functions to a specific brain region on the basis of brain damage and the corresponding impairments—the researchers also took the opposite approach: the “big data” approach via databases. These portals contain information from tens of thousands of participants from many psychological tests and the brain areas activated in the process. With their help, the researchers were able to predict the patient’s impairments solely on the basis of the brain damage determined by brain scans. Experts refer to this as symptom reading, a method which could be used in the future to adapt a therapy to individual patients and their brain damage without having to test it in detail.